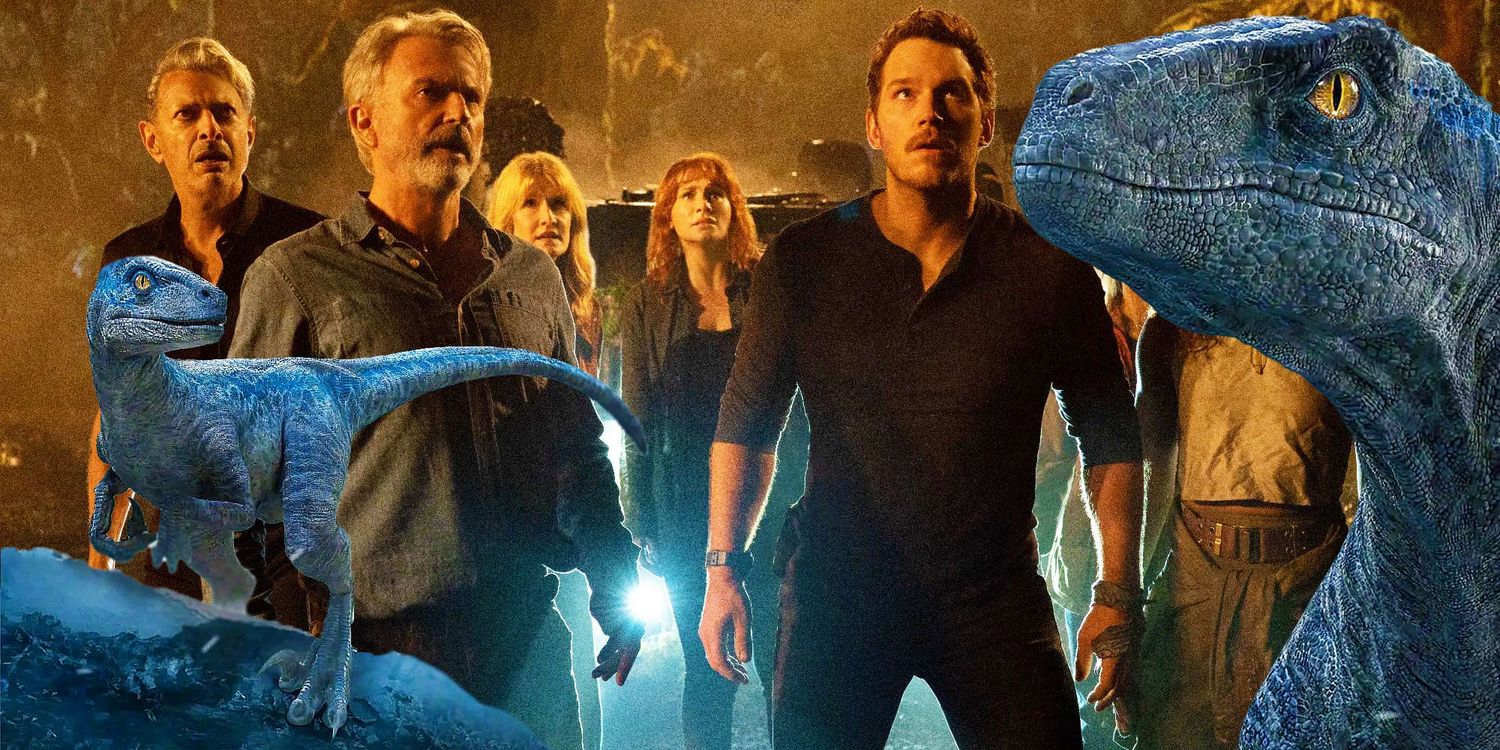 What Are The Names Of All Dinosaurs In Jurassic World: Dominion?

An amazing cast of dinosaurs and other prehistoric monsters can be found in Jurassic World: Dominion. Four years after the release of 2018’s Jurassic World: Fallen Kingdom, the third instalment in the Jurassic World trilogy and the sixth Jurassic film overall were released in 2022. Dominion also serves as the series’ conclusion and wraps up several storylines that started with Jurassic Park in 1993.

Following the escape-focused conclusion of Fallen Kingdom, Jurassic World: Dominion followed the characters from the first two Jurassic World films as well as some old favourites from the Jurassic Park trilogy as they battled for survival in a world where dinosaurs had finally made it to the mainland. The fate of these ancient animals must be decided by the world since the genetically altered beings are no longer confined to an isolated island or a secure laboratory. The movie, which director Colin Trevorrow referred to as a “science thriller,” carried the Jurassic Park saga to its dramatic and eagerly anticipated conclusion.

There must be a variety of dinosaurs in every Jurassic Park or Jurassic World movie, both new and old. There are some brand-new dinosaurs that are making their debut appearances in the franchise among all the returning dinosaurs, including the dreadful T-Rex and Blue the Velociraptor. Each and every dinosaur that appears in Jurassic World: Dominion is described in full here. 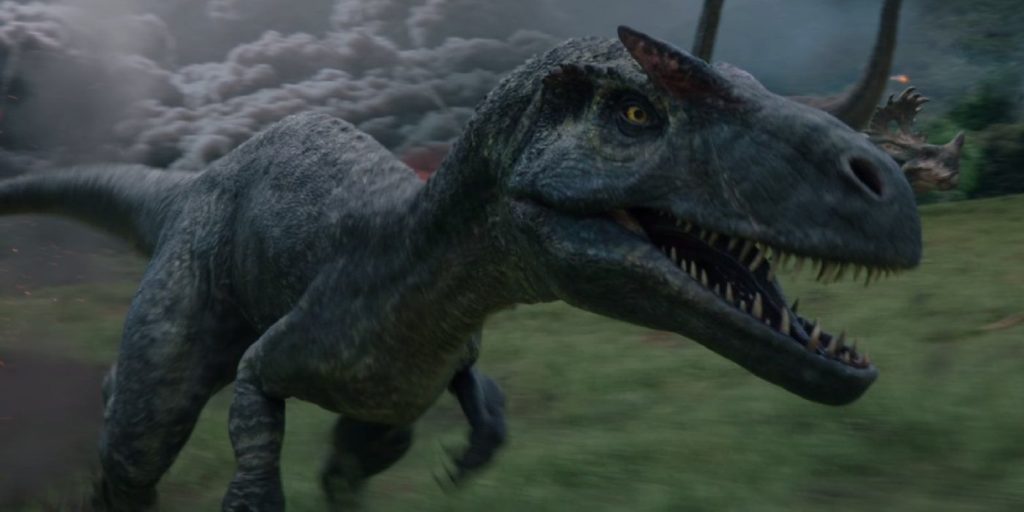 The meat-eating Allosaurus made its film debut in Jurassic World: Fallen Kingdom, where it was revealed that at least five members of the species had returned to the mainland alive. In the movie’s dinosaur auction, one of these remaining Allosaurus was bought, and in the short film Battle at Big Rock, another was seen engaging in combat with a resolute Nasutoceratops. After authorities raid a dinosaur illicit market, many Allosaurus can be seen wreaking havoc in Malta in Jurassic World: Dominion. 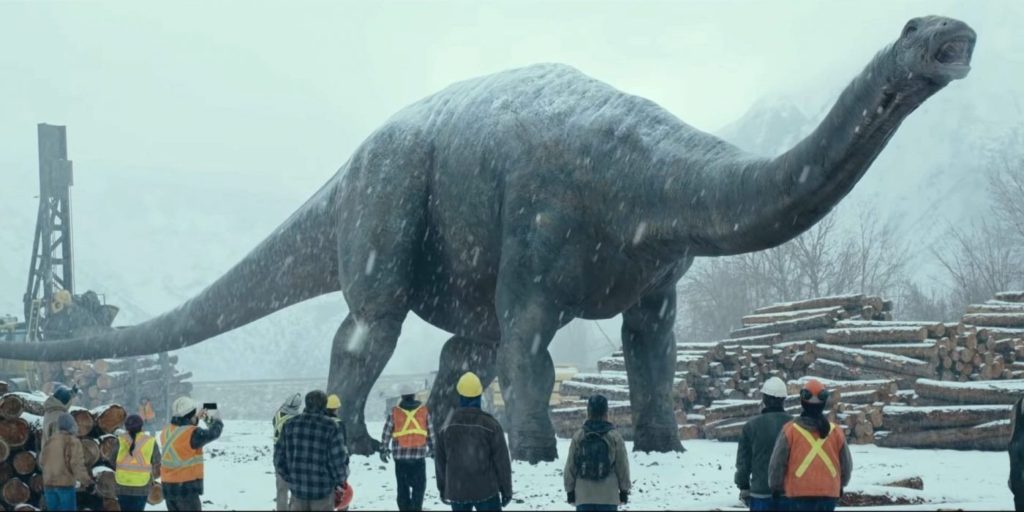 Without a long-necked dinosaur that would dwarf an elephant, the movie wouldn’t be considered part of the Jurassic franchise. The Apatosaurus nearly dominated this position in Jurassic World: Dominion. The Apatosaurus is a gigantic herbivore that instils awe in all of the individuals there, although being smaller than the Brachiosaurus seen in Jurassic Park. 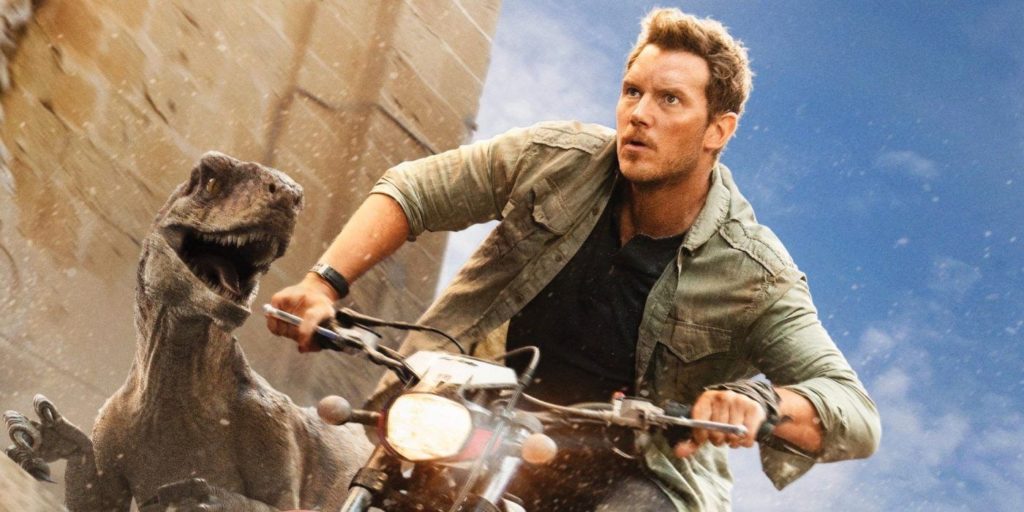 The mindless shoulder-height pack-hunter role in Jurassic World: Dominion is now performed by the Atrociraptor since Blue and Owen’s arc required that the velociraptors in Jurassic World be more relatable than they were in Jurassic Park. They are one of the predators Owen (Chris Pratt) must avoid as he races through the streets of Malta on a motorcycle. They are larger and more vicious than Blue and her gang. Because they are related to Velociraptor dinosaurs, Atrociraptors are a perfect alternative for the intense bike pursuit sequence from Dominion. 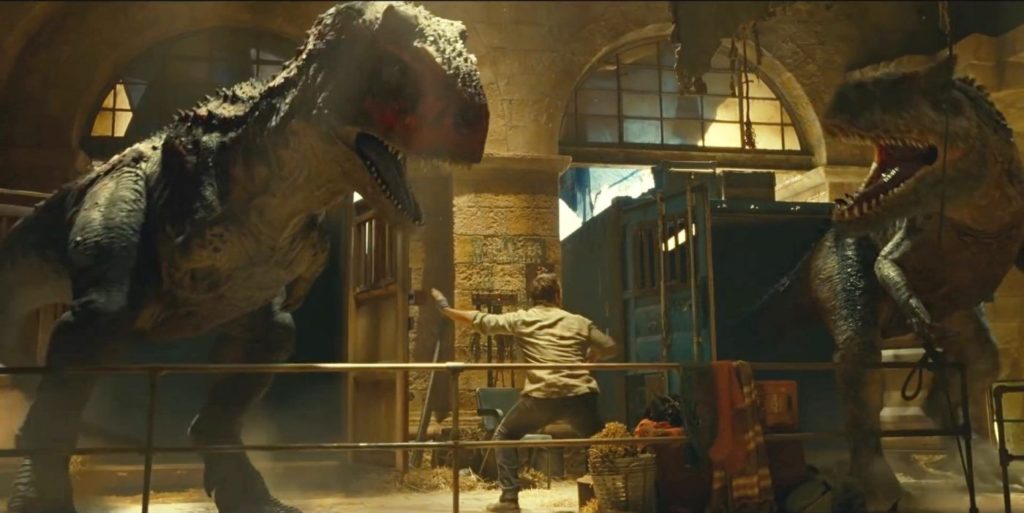 After the dinosaurs in the black market in Jurassic World: Dominion are freed, the Carnotaurus is the second lethal predator released onto the streets of Malta. In South America during the late Cretaceous, Carnotaurus nevertheless controlled food chains despite not being quite the same apex predator as the powerful T-Rex. While viewing Jurassic World: Dominion, it’s simple to understand why. Despite being smaller than a T-Rex, carnotaurus nonetheless tower above Malta’s terrified residents, a fact that these deadly horned predators take full advantage of. 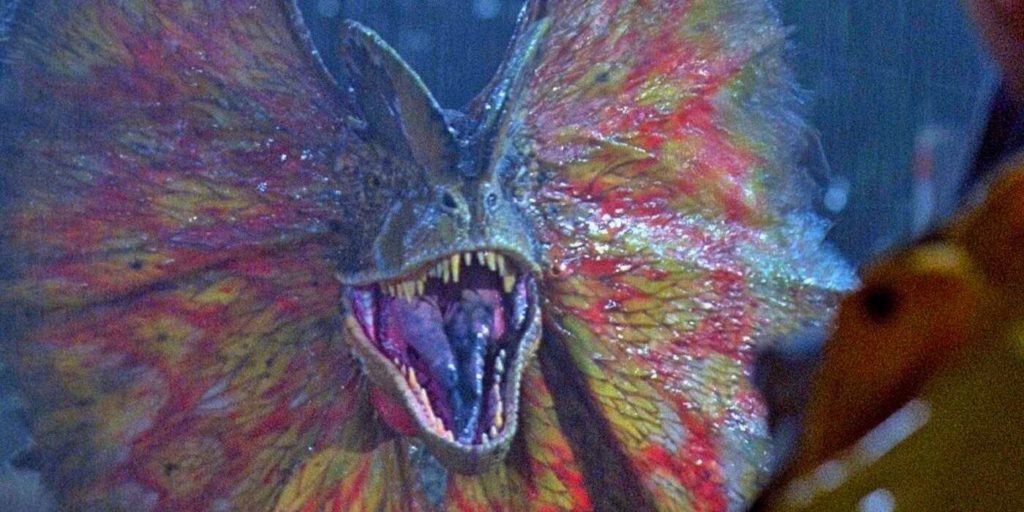 For Jurassic World: Dominion, numerous Jurassic Park favourites make cameo appearances. But it’s not just people who can do this. Dennis Nedry (Wayne Knight), a helpless industrial espionage failure who was killed by the frilled Dilophosaurus in Jurassic Park, is returned. When a group of these venom-spitting dinosaurs attacked BioSyn CEO Lewis Dodgson, they continued their pattern of killing out the antagonists from the Jurassic Park movies (Campbell Scott).

However, the Dreadnoughtus, the largest dinosaur from Jurassic World: Dominion, might easily surpass the Brachiosaurus from Jurassic Park. Dreadnoughtus is thought to be the biggest land mammal that has ever existed and that can be calculated using current biology and physics knowledge. A mature Dreadnoughtus might grow to be 85 feet long and weigh more than 65 tonnes. Everything we know about the upper bounds of the natural universe would be broken if something larger were found. The word Dreatnoughtus, which is highlighted in the game Dominion, literally translates as “fear nothing,” which is fitting for a creature of such immense size. 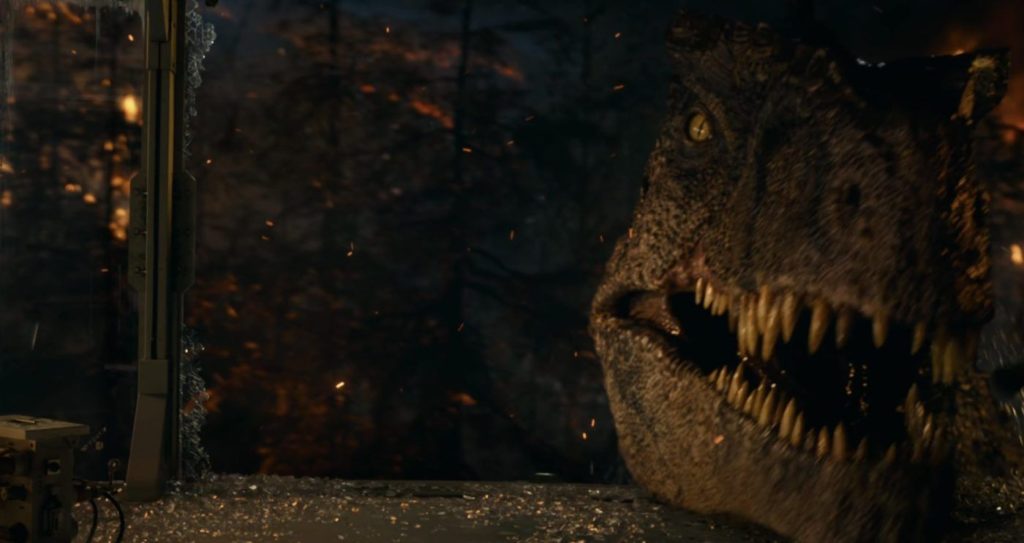 The enormous Giganotosaurus is the King Ghidorah of the Jurassic World film series, if Rexy is its Godzilla. At the conclusion of Jurassic World: Dominion, the Giganotosaurus is set up as the T-adversary, Rex’s and Rexy is unable to defeat the enormous predator without help from a Therizinosaurus. Even though every predatory dinosaur in Dominion is terrifying, the Giganotosaurus stands out among the rest. They had mouths full of 8–12-inch teeth, which they could use to rip through their prey’s flesh with a bite force of more than 35,000 Newtons. They were larger than Tyrannosaurus rex. 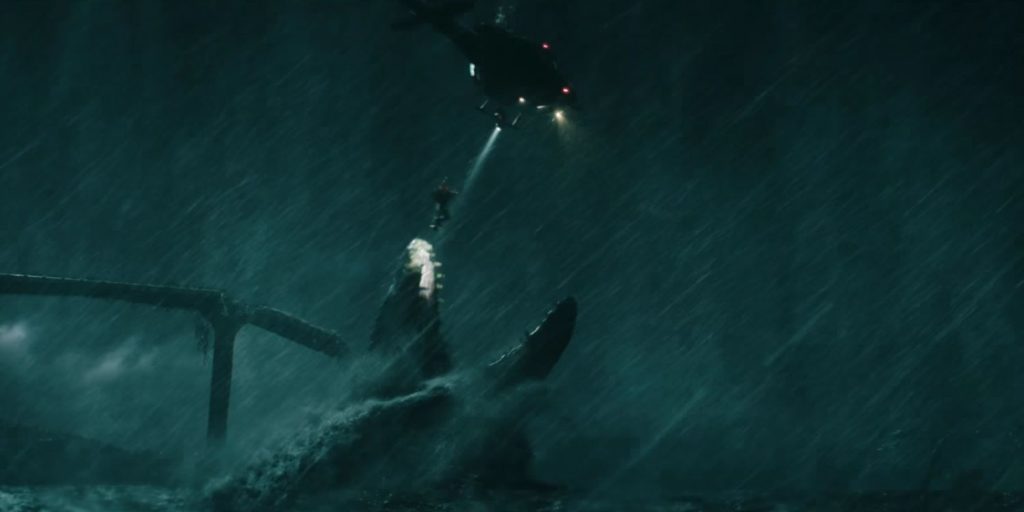 The Mosasaurus, one of Jurassic World’s breakout prehistoric stars, has grown into one of the most recognisable creatures in the entire series and even got to slay the mutant Indominus Rex. It also has the distinction of becoming the first inhabitant of the park to leave the island and go free. In the beginning of the film, the crew of a crabbing boat is capsized by the Mosasaurus, which is still cruising the seas. 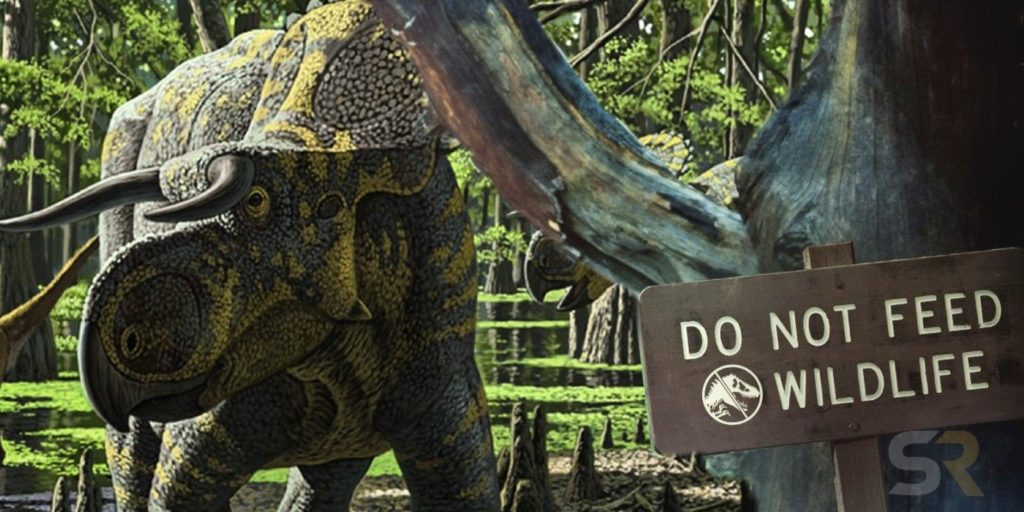 In the short video Battle at Big Rock, the Nasutoceratops—a relative of the well-known three-horned Triceratops from Jurassic Park—fought an Allosaurus for the first time in Jurassic World. The dinosaur makes a comeback in Jurassic World: Dominion, flipping jeeps like they were made of cotton and paper with the help of its enormous weight and horns. A fleet of Dinosaur Protection Group vehicles disturbs a herd of Nasutoceratops, Triceratops, and Sinoceratops with three horns, causing them to get alarmed and begin to stampede. 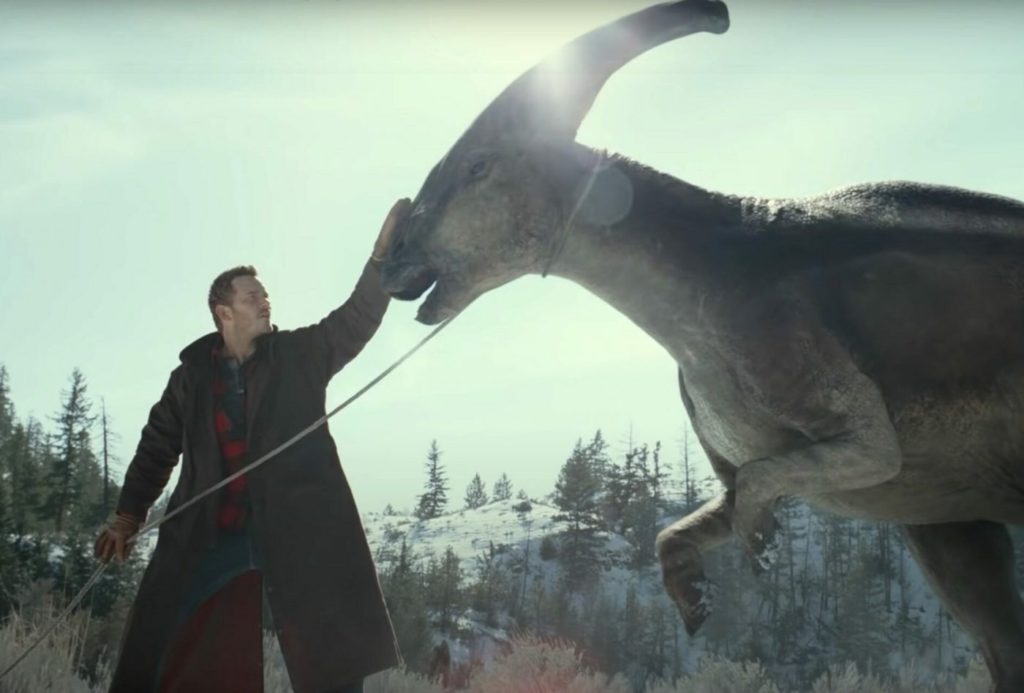 Owen Grady (Christ Pratt) is riding a troop of Parasaurolophus across the Sierra Nevada mountains during his opening scenes in Jurassic World: Dominion. Some palaeontologists believe that this herbivore could achieve top speeds of 25 mph and lived in herds. The Parasaurolophus, like many of the dinosaurs in Jurassic World and Jurassic Park, lived 65 million years after the Jurassic period, in the late Cretaceous. 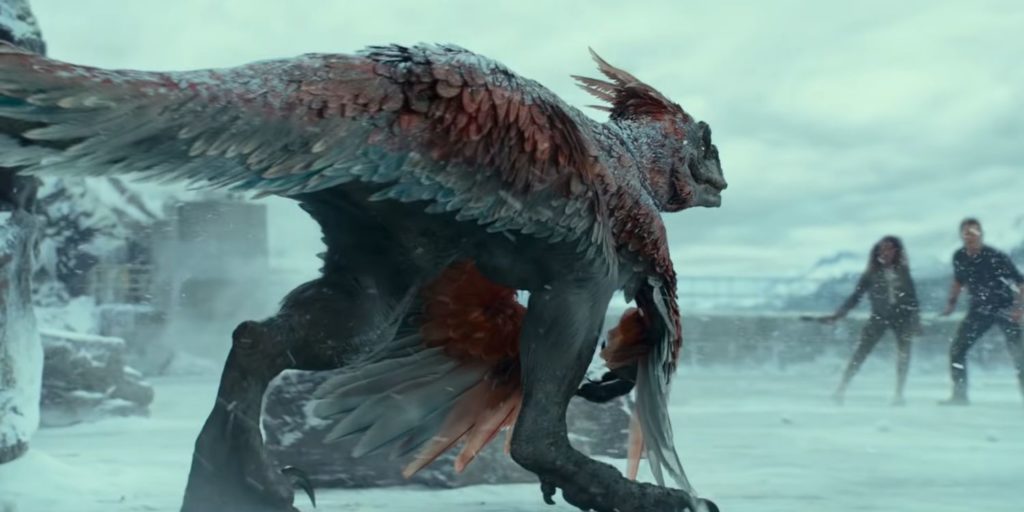 When it comes to the dinosaur cast of Jurassic World: Dominion, Pyroraptors have been causing quite a stir. They are a unique dinosaur that is new to the franchise. In the movie, these unusual raptors had feathers. Given that the dinosaurs in Jurassic Park and Jurassic World aren’t based on real science, this is an intriguing choice. When compared to how they were formerly believed to be before breakthroughs in palaeontology and genetics led to a greater understanding of dinosaur physiology, their designs are typically less avian and more reptile. However, the Pyroraptor can’t win any accolades for historical accuracy as there is no evidence to support its depiction in the film as an agile swimmer. 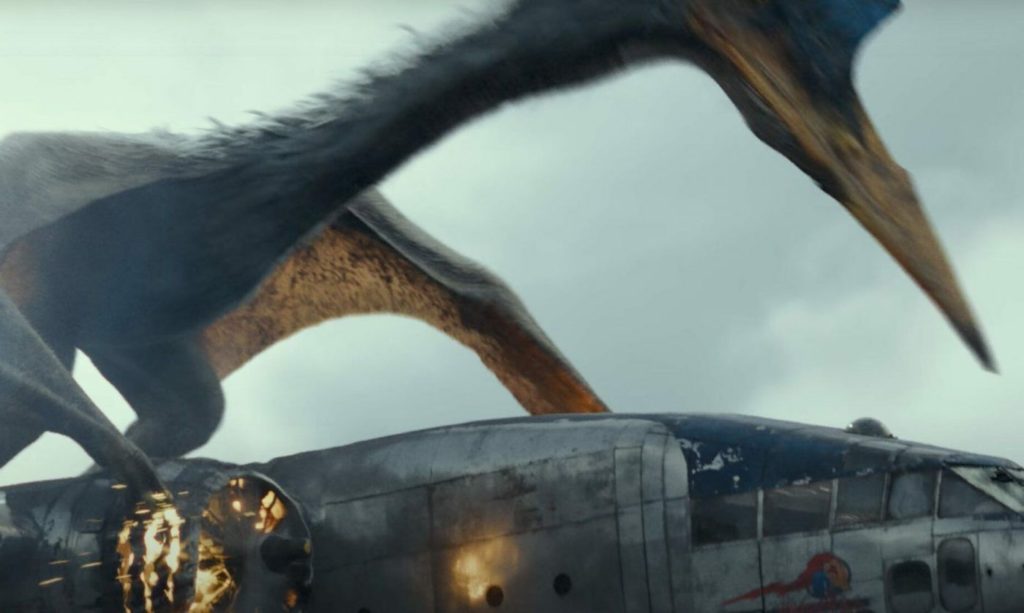 The colossal flying pterosaur Quetzalcoatlus belonged to the same family as the pterodactyl. However, Quetzalcoatlus was significantly bigger, which was used in one of the violent CGI sequences in Jurassic World: Dominion when one tries to bring down a plane. In the dino-inhabited Earth of Dominion, their estimated wingspan of just over 36 feet would be more than enough to make flying infinitely riskier. 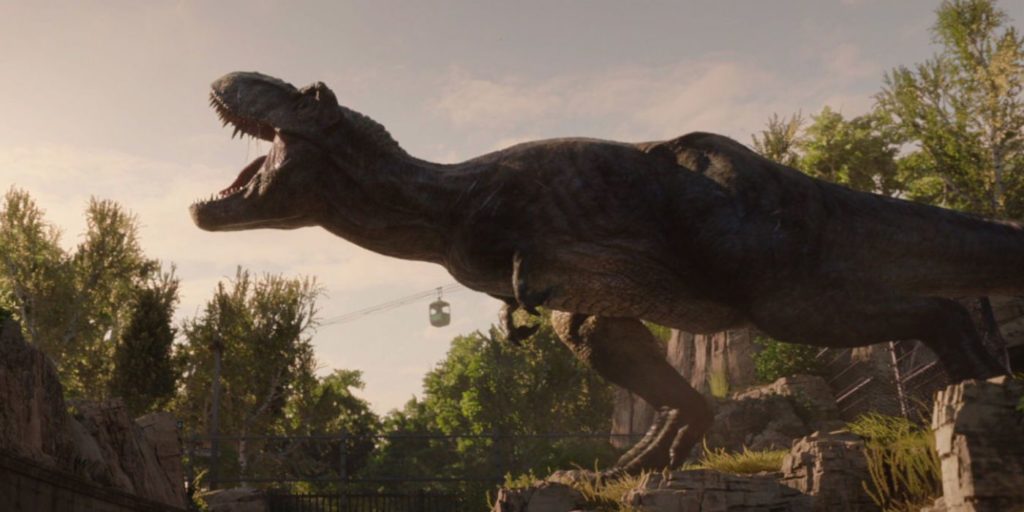 Without a T-Rex, a Jurassic movie wouldn’t be complete, and Jurassic World: Dominion is no different. The recognisable predator is the series’ unofficial mascot, and both in real life and in the movies, the park’s emblem is made up of the skeleton of the predator. None of the T-Rexes in the series is as well-known than the original Rex from Jurassic Park. This T-Rex, known as “Rexy,” is the same one that battled the Indominus in Jurassic World and broke free at the conclusion of Fallen Kingdom. In the opening sequence of Jurassic World: Dominion, which takes place at a drive-in theatre, Rexy encounters fresh difficulties as she flees from BioSyn helicopters. By the end of the film T00, the fan-favorite T-Rex sees her personal story come to a satisfying conclusion by finally exacting retribution on the Giganotosaur who killed her 65 million years earlier. 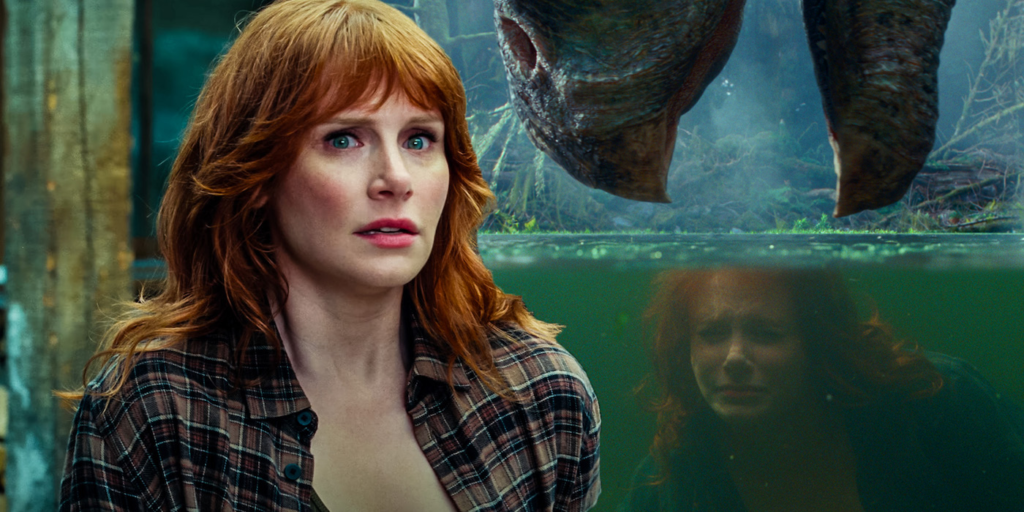 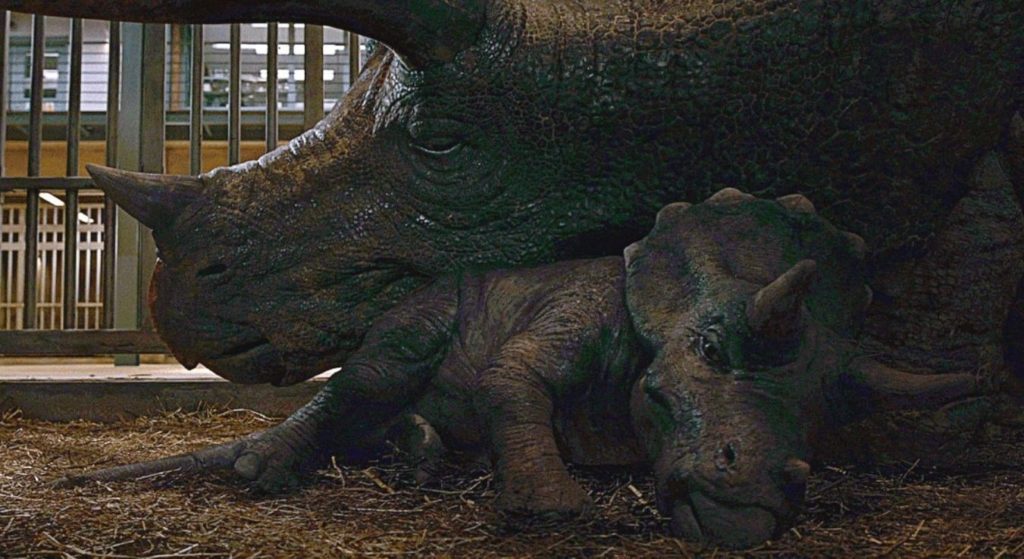 The audience’s hearts were won over by a wounded Triceratops in Jurassic Park, and “Trikes” are back in Jurassic World: Dominion for another heartbreaking scene. Dinosaur black markets are now a reality as they once again wander the earth. One of these illicit businesses in Malta is depicted in one episode. A family of Triceratops, which includes a cute youngster Trike, is among the dinosaurs kept in cages. 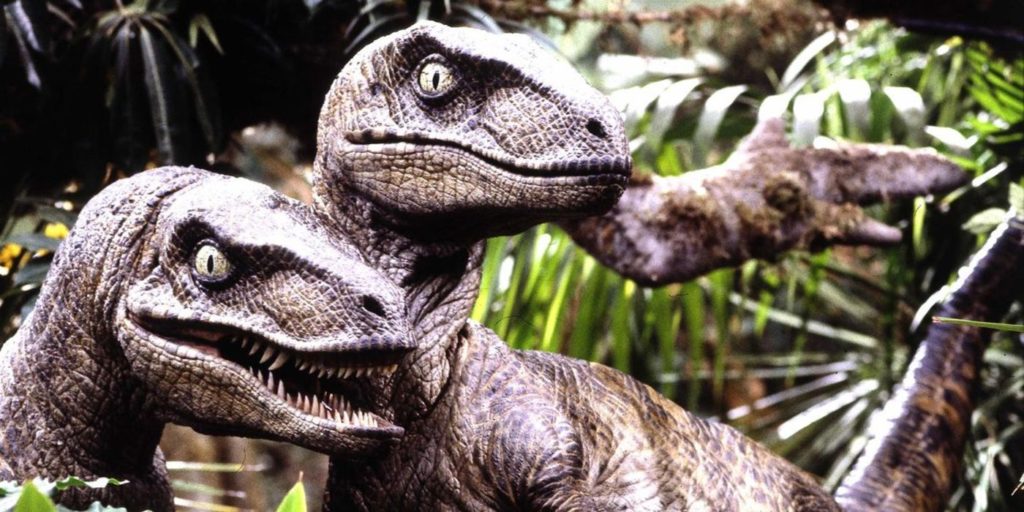 The Velociraptor is without a doubt the second most recognisable dinosaur in the Jurassic Park series, behind the T-Rex. Audiences first met Blue, a particular raptor nurtured from birth by Chris Pratt’s Owen Grady, in Jurassic World. Blue and a swarm of other dinosaurs made their way into the wild at the conclusion of Fallen Kingdom. Dominion, though, steers Blue in a direction that many supporters find contentious. The asexually generated daughter of Blue is named Beta. Although having Blue children is not illegal in and of itself, many people have complained online about how confusing the Beta and Blue narrative was to follow. They believed that the time that could have been spent on character development or more of the dinosaur action typical of a Jurassic World movie was instead taken up by the emphasis on science fiction genetics. 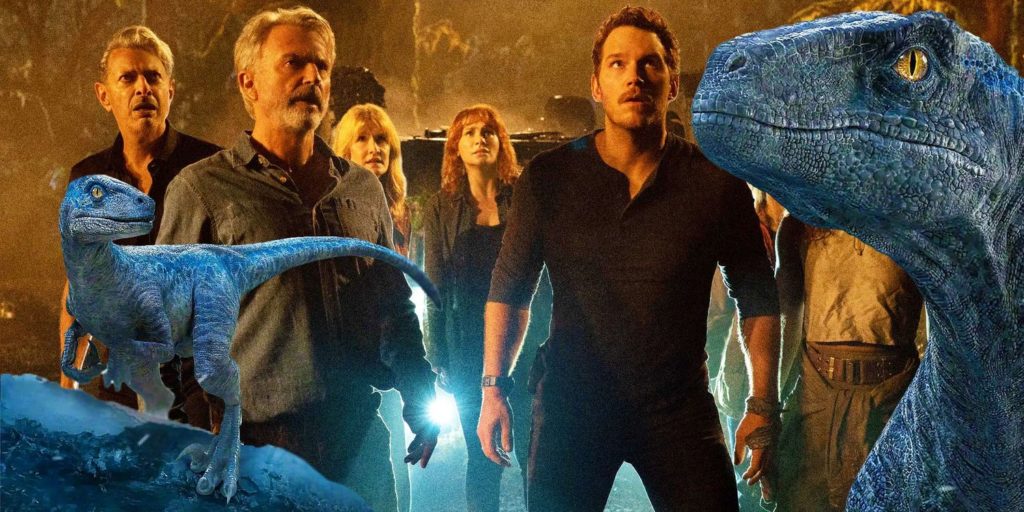 One of the most stunning dinosaur lineups in a Jurassic film to date, with several of them brand-new to the franchise, can be found in Jurassic World: Dominion. The size of on-screen dinosaurs in the franchise was pushed to new heights by behemoths like Dreadnoughtus and Giganotosaurus. The Pyroraptor and Atrociraptor’s appearance allowed Owen to fully establish his Velociraptors as sympathetic, if misunderstood and unapologetically carnivorous, heroes. Then, of course, there were the aesthetically arresting features, like the clawed Therizinosaurus and the plane-fighting Quetzalcoatlus, which guarantee Dominion will stand out in the franchise for anything other than its unfavourable initial reviews.

However, it wasn’t just brand-new dinosaurs. In an effort to commemorate the fact that Jurassic World: Dominion is the last film in the Jurassic World trilogy, a number of characters and creatures from the first Jurassic Park from 1993 were brought back. Favorite dinosaurs from Isla Nubar’s disastrous first park, including the Dilophosaur and Triceratops, are returning with Alan Grant (Sam Neill) and Ellie Sattler (Laura Dern). Many of Jurassic World’s own enduring favourites, such as the aquatic Mosasaurus, are also. And despite nearly three decades passing, the T-Rex and Velociraptor are still vying for the title of the audience’s favourite ancient predator in Jurassic World: Dominion. These two dinosaurs stole the show in Jurassic Park.

Why Naruto Waited So Long To Show Kakashi’s Face Without His Mask?