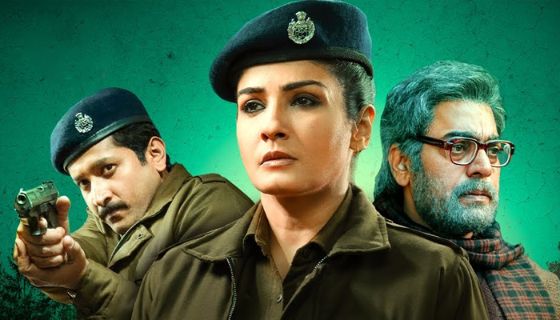 From December 10, 2021, Aranyak, an Indian web series, will be available on Netflix. It was also created by Bluffmaster and Dum Maaro Dum star Rohan Sippy. The director is Vinay Waikul, and the plot is written by Charudutt Acharya. Raveena Tandon, Parambrata Chatterjee, Ashutosh Rana, Meghna Malik, Zakir Hussain, and Indraneil Sengupta are among the ensemble cast members. Finally, the action-crime thriller is available in Hindi as well as English.

Kasturi, a local constable, is at the center of the story (Raveena). Kasturi should cooperate with Angad on a huge case that leads them to skeletons, odd myths, and other dubious things present in the forest when a foreign teenage tourist goes missing in a town (Sironah).

Aranyak, a Netflix original, is a one-of-a-kind experience that combines a good tale with an entertaining thriller. It will also keep you on the edge of your seat until the very last second of the show. Raveena and Parambrata dominate the show when it comes to performances. They were flawless in their roles. Furthermore, Ashutosh Rana contributes significantly. Apart from them, the supporting cast, which includes Meghna Malik, Zakir Hussain, and others, does a good job with their roles. Director Vinay performs an excellent job. Overall, Aranyak is an engrossing suspense thriller.