In the season 6 finale, things start to spin out of control for practically everyone involved after the shocking revelation that Mike Prince (Corey Stoll) wants to be President of the United States of America. Chuck (Paul Giamatti) believes his cause is just, so he goes after the mysterious billionaire with everything he has, despite the fact that he no longer has the power he once had as Attorney General. Rian tells her coworkers that she slept with Prince after learning about Prince’s presidential ambitions, prompting a high-level attempt at Michael Prince Capital to keep her quiet. Here’s all you need to know about the sixth season finale’s ending. WARNING: SPOILERS AHEAD.

‘Cold Storage,’ the first episode of the season, begins with Chuck and Prince clashing at the Attorney General’s office. Kate and Ari, their respective lawyers, are also present. Acting Attorney General Dave cautions them to take the meeting seriously because either of them could face prison time. The episode then jumps ahead 72 hours. Chuck pays Kate a visit and informs her that he knows she once saved a family member from prosecution by opting not to charge them. Chuck has made it known that he intends to fight. His former subordinates and friends are concerned about him, but none of them can do anything about it. 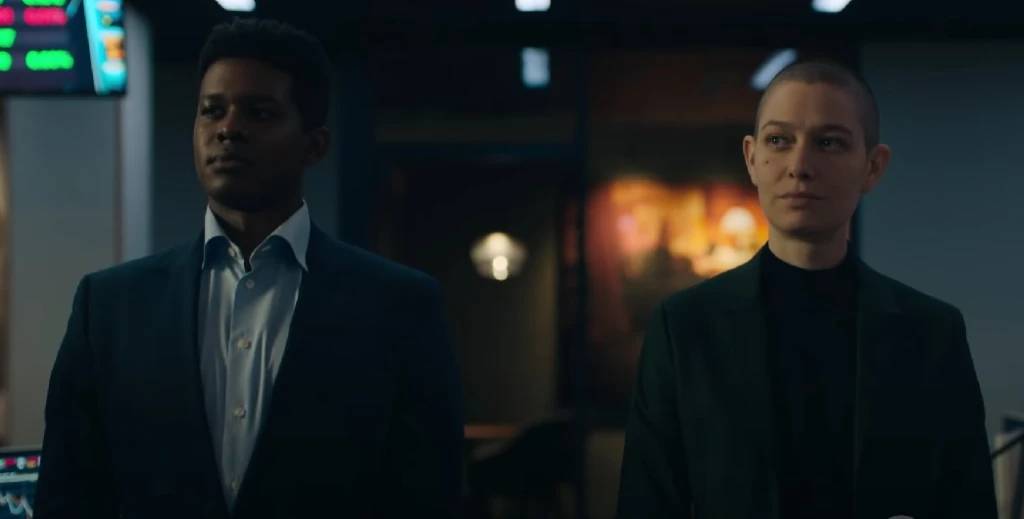 Mike Prince has kept an armored vehicle firm he purchased while paying off Axe, Chuck discovers. Following the trail, Chuck discovers that the cars are transporting many computer disks. He deduces that these drives contain bitcoin, which Mike intends to use to pay for Mike Money, Prince’s anti-income inequality initiative. Chuck sees another parallel between Mike Prince and Greg Stillson, the corrupt and powerful politician from Stephen King’s novel ‘The Dead Zone’ and its adaptations, while characterizing Mike Prince. Stillson aspires to be the President of the United States of America. Stillson, like Prince, has a ravenous desire for what he wants and will not stop until he gets it.

Scooter and Wags try to figure out what will happen if Rian sleeps with Prince when they discover it. Later, we learn that Mike anticipated his office’s reaction. Rian maintains that the interaction was fully voluntary. She eventually refuses to accept the money. This rejection, Taylor later tells her, has allowed her to preserve her freedom.

Billions Season 6 Finale Ending: Is There Cryptocurrency in the Drives Retrieved from Mike Prince’s Warehouses?

Chuck doesn’t have the power to execute a raid after being dismissed from public service, but the drives are too big of a mystery for him to ignore. He gets inside one of the warehouses where a drive is housed and successfully carries it out with the help of Karl Allerd. He consults an IT professional, who informs Chuck that they only have ten attempts to access the drive. The drive will be permanently shut off if it is not opened by the tenth try. That one is successfully opened by the IT professional, resulting in the theft of over a hundred million dollars in cryptocurrencies from Prince.

Chuck believes that because one of the drives has so much money on it, the others do as well. However, the manner in which he acquired the initial data was illegal. As a result, he may be sentenced to prison. Meanwhile, Prince is charged with tax evasion.

Prince keeps saying there’s nothing in those drives, but he’s lying, as proven near the end of the episode. They do, in fact, have $3.5 billion in cryptocurrency. Prince decides to put all of his money on the altar of his ambition when he faces possible jail time. He lets the IT expert make all ten efforts, and the money is eternally lost. Chuck is arrested for using a bogus warrant and obtaining evidence under false pretenses since he is unable to show Mike’s tax fraud.

Will Chuck Ever Get Released? What Is Dave Planning?

Mike is mistaken if he believes the tension between him and Chuck is ended. In the season’s last scene, Dave pays a visit to her former boss in prison and reveals that she obtained a court order validating his raid. Mike was seen leaving her office, and she knows he did actually lose $3.5 billion. For the first time since starting work for Chuck, she understands why he has been opposing Prince so vehemently. With cryptocurrencies, he came close to buying the presidential election. She has no idea what he will do if he is given the opportunity to become President.

Chuck will most likely remain in jail for the time being, despite the fact that he no longer has any legal obligations. He and Dave will almost certainly be preparing for Prince’s next step toward the White House. Although 2028 is still a long way off, presidential campaigns do not happen overnight. Chuck and Dave, on the other hand, will be ready if Prince decides to make that move.