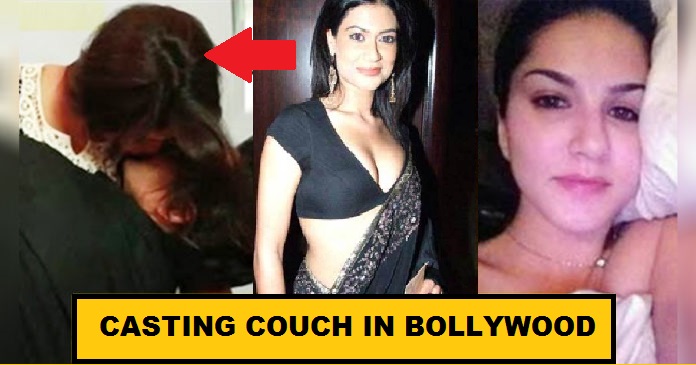 Casting couch is defined as demanding of sexual favours by an employer or person in a position of power and authority, from an apprentice employee, or subordinate to a superior in return for entry into an occupation, or for other career advancements within an organization. The term casting couch originated in the motion picture industry, with specific reference to couches in offices that could be used for sexual activity between casting directors or film producers and aspiring actors. It is not to be confused with the adult entertainment industry where such actions may be a prerequisite, although many pornographic films and pornographic websites play on the casting couch theme and allude to similarities one may find in casting couch scenarios in the film industry.

The term is now often used to refer to other industries besides entertainment, though careers which are highly desirable and traditionally difficult to break into, such as the movie, television and music industries, have been the subject of casting couch stories in popular culture. Such trading of favours is an abuse of power—sometimes even statutory rape—and can become a wider sex scandal if deemed newsworthy.

In 2014, Indian actor Shashi Kapoor said that the casting couch existed in India in the 1960s for newcomer leading men by established leading heroines. Therefore, he was grateful to star Nanda for not subjecting him to the casting couch when she agreed to star with him when he was an unknown actor. Here are such seven actresses who had to sleep with the producers to get roles in movies.

Bollywood’s Bajirao has been one of the bold actors to speak up about the dark side of the industry. In an interview the actor had conceded that, “Casting couch is a very real thing. I have experienced it first-hand,” “When I said ‘no’ (to his demands), he cried like a jilted lover. Later, I got to know that he does it to everyone.”

This actress was also a victim when she began her career. Apart from this, she accused of Subhashish Kapoor of couching. Whether it was a sexual abuse or not was a mystery, but there was a video which revealed that the duo were speaking. The actress revealed that he was asking her for a sexual pleasure and she was in no mood to entertain it. At the end of the day, both of them landed up in a controversy and it took quite some time to get silenced.

Even the famous director like Rajkumar Santoshi was accused of couching. When the shooting of the film China Gate was on the process, he offered sex to the actress over a matter of compromise. She did not give in to the pressure, but there are rumours that she did compromise a bit. After all, these stories do not have a perfect proof except they are caught on camera. Scandals are common everywhere, and the elite class is not free from it. So, people come to know about these stories which resurface from time to time.

The scandal was disclosed on the sets of Bigg Boss in 2011. This happened in Shanghai when director ‘Dibakar Banerjee’ was caught couching actress ‘Payal Rohatgi’. This incident received a great deal of publicity.

The actress who is known to be very bold and open with her words also had a few thoughts on the casting couch.

“Fortunately, I never had to go through the casting couch. Honestly, I feel somebody has to be really dumb to think that they’d get a role for sleeping around. And I have never been so dumb — not even at the age of 17 when I started my career. People should use their common sense. It’s stupid if you actually believe someone who tells you that he or she is giving you a role only if you please him or her.” “If the casting couch route was so easy, then all the women from the red light area would have been superstars today.”

Popular actress Tisca Chopra who has worked in many Bollywood movies and has also been on the jury of MAMI film festival shared her opinion on the casting couch. “It’s a question of supply and demand. The supply of actors is far greater than their demand and so the directors and producers demand something extra for giving chances to aspirants, I have never heard of anybody raping anyone.”

In fact, she herself has been a victim but she “devised a cunning plan and managed to escape from the situation. ”You call their bluff and say I am better than this, ‘I can do this on my own merit’,” she says.
We have to say, that’s quite an interesting way of putting it.

‘Hate Story 2’ actress, Surveen Chawla recently revealed that she was a victim of casting couch. The actress experience it in the South Indian film industry.

Before establishing himself as an actor, Ayushmann Khurrana indeed was a well-known anchor of the small screen. It was during his struggling days some of the casting directors asked him to deliver sexual favors which he simply refused. Mr. Khurana also stated to media that casting couch is a reality of the tinsel town.

In 2009, Indian actress Suchitra Krishnamoorthi reported an incident in her blog where she narrowly escaped sexual advances from a producer while casting for a film role.

In 2005, India TV’s India’s Most Wanted, an investigative TV show, caught Indian Idol host Aman Verma and longtime Bollywood actor Shakti Kapoor in a “sting” operation and accused them of abusing their positions to force women to have sex with them. They even produced video evidence of Kapoor making advances to a planted girl, in which Kapoor tells the girl that superstars Aishwarya Rai, Rani Mukerji and Preity Zinta slept with people such as Subhash Ghai, Yash Chopra and Yash Johar to get where they were. Verma, Kapoor and most of the Bollywood industry have defended themselves, calling India TV’s claims unfounded and sensational and claim that the video footage of Kapoor is misleading.

Many such incidents have come forward, even with some popular names in question. Not many people have been able to prove it. Proof or not, something is deeply wrong with this practice of Casting new talents based on their willingness to sleep with their superiors.