We are all aware that the biography of the inventor of the polka parody takes some artistic licence in Weird: The Al Yankovic Story. But how much of what occurs in this comedy starring Daniel Radcliffe is based on reality? How popular is Weird Al? How did his parents feel about his love of writing parody songs? And perhaps most importantly: Did he hook up with Madonna?

Is my want to know strange? Without a doubt.

Check out the frequently asked questions and responses for Weird: The Al Yankovic Story. We dug deep into Yankovic’s Behind The Music episode and interviews with him to discover the truth.

Were Weird Al’s parents supportive of his music? 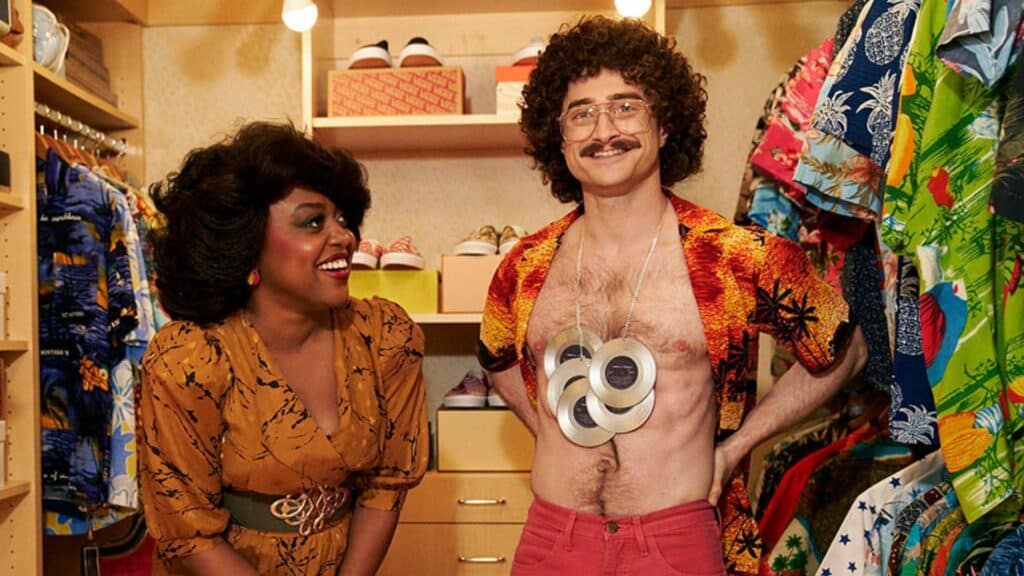 In the movie Weird, Yankovic’s mother is seen bemoaning his interest in Hawaiian shirts, while his father adamantly disapproves of his ambitions to compose stupid lyrics for “music that already exist.” Mary and Nick Yankovic supported their only kid in real life, sharing childhood home movies and talking about how much fun it was to raise him with Behind the Music producers.

Despite the fact that how it is depicted on movie is far funnier than how it actually occurred, it was a door-to-door accordion salesman who turned his life for the better. The salesperson (played by Thomas Lennon) in the film claims that the instrument will get him all the females before getting beaten up by Al’s enraged father. However, Al’s mother actually chose the accordion over a guitar because she believed it would make him sound like a “one-man band” in real life.

My parents, being the visionaries that they were, determined that I should be incredibly popular in high school if I took accordion lessons, Yankovic quipped in a different interview. In the scandalous polka party scene from Weird, such idealised situation hilariously comes to pass.

Yankovic did not, however, keep his love of playing with the polka-making machine a secret from his father. He began playing at the age of six and was very talented. Three years later, he began penning his own humorous songs.

Did Weird Al have an addiction problem?

Nope. The real Yankovic is so spotless that he was baffled as to why Behind the Music was even interested in his narrative, especially considering that in Weird he goes on a drug trip and consumes booze to dangerous excess.

He claimed during a live interview: “Never have I slept with someone from a band. I’ve never injured a musician. I’ve never gone on a three-day heroin binge and stayed in my boat. I’ve never experienced weight issues. I’ve never had so many women in my bed that I lost track. Except for in music videos, I’ve never lip-synced to any of my songs. I never had a drinking problem. I’ve never been the marijuana smoking poster child, and I’ve never wed my cousin’s thirteen-year-old. What do you need from me then?”

Yankovic leads a tidy existence in real life, much like he does in his humour. The narrator of Behind the Music said, “He’s a staunch vegetarian who doesn’t smoke and hardly ever drinks.” His acquaintances who were interviewed state that he has never used drugs, even under duress. The episode’s closest thing to dirt came from the late, brilliant comedian and fellow accordionist Judy Tenuta, who quipped that she had helped him come down from a “tiramisu high.” His sweet tooth is the only known vice he has.

Did Dr. Demento come up with the name Weird Al? 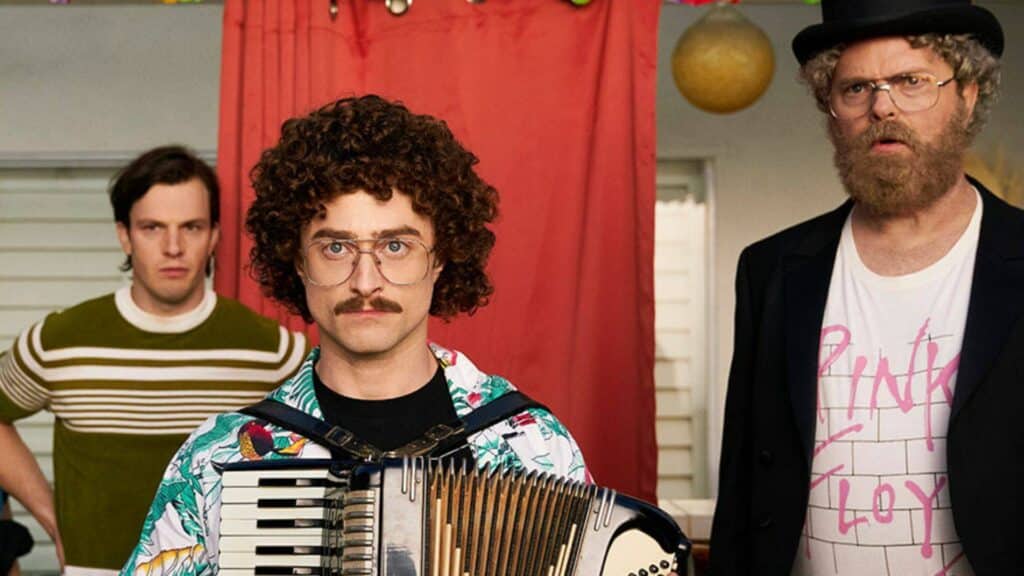 No, a crazy mentor did not give him that nickname. Dr. Demento, however, had an impact on the nascent comedic musician. When he was in his teens, Yankovic started tuning in to Dr. Demento’s novelty song-focused radio show.

A recording of his own song, “Belvedere Cruisin,” about riding around in his parents’ car, was sent when he was 16 years old. This was his debut radio appearance in 1976. On Behind the Music, Yankovic reflected, “I simply went crazy. “I simply screamed and raced about. I found it hard to believe.”

That passion probably served as the inspiration for the Weird scene where Al and his buddies erupt in jubilation in their apartment when “My Bologna” starts playing. It’s fairly accurate that the friends in the movie record the song in a public lavatory. It was the restroom at the collegiate radio station where Al worked in reality. Additionally, he picked up the moniker “Weird Al” in college. Joel Miller, a friend and bandmate, claims that this moniker originated during their freshman year as a result of the “crazy look” Yankovic gave several of his classmates.

Yankovic excelled well at California Polytechnic State University in San Luis Obispo despite his perhaps distasteful name, earning a bachelor’s degree in design there. However, chaos and music were calling.

Even in his early performances, Yankovic discovered that crowds in cafés and radio listeners embraced his brand of humour. The success of “My Bologna” on Dr. Demento’s programme inspired Yankovic to pursue his love of ridiculous show business. The song “Another One Rides the Bus” was his follow-up. Al was accompanied by longtime bandmate Jon Bermuda Schwartz, who provided percussion on the accordion’s case, just like in the pool scene from the film.

One of the craziest assertions made in Weird: The Al Yankovic Story is that “Eat It” is an original song and Michael Jackson’s “Beat It” is a parody of it.

“Eat It” launched Yankovic to the next level of popularity in both the movie and the genuine story. Overnight, record crowds attended his gigs. Outside of the domain of novelty jams, he gained notoriety. He noted in Behind the Music that it was only after this that people started to recognise him.

Has Weird Al scored more #1 songs than The Beatles?

No. That record is still held by The Beatles. However, his album Mandatory Fun debuted at the top of the Billboard chart in 2014. The musician was referred to as “a multi-Grammy Award winner who’s sold more humorous records than anyone on the planet” by Behind The Music in 1999.

Weird Al Yankovic will have 16 Grammy nominations, 5 wins, 10 gold records, and 6 platinum albums in the US by the year 2022.

Did Weird Al and Madonna date? 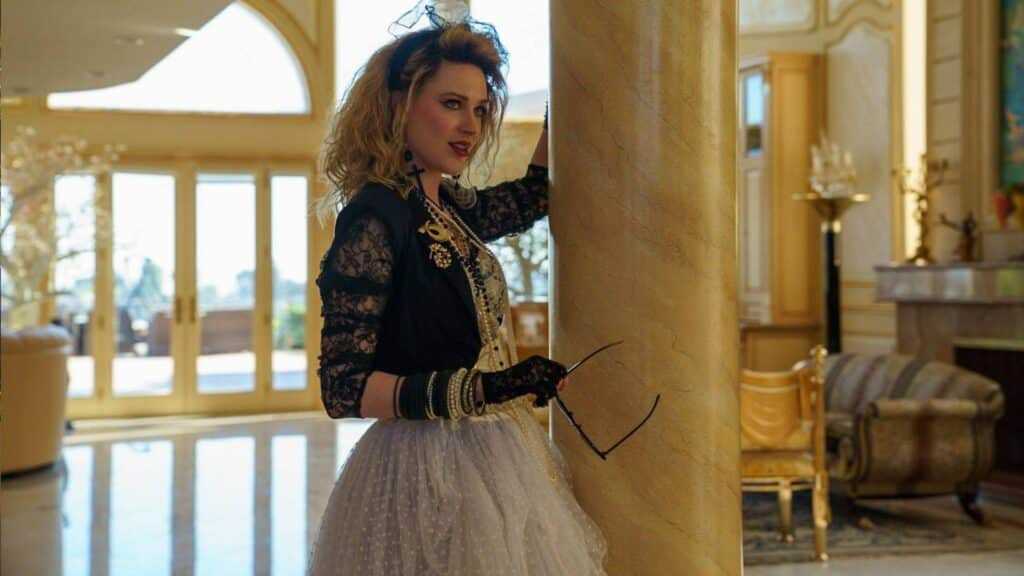 The singers of “Like a Surgeon” and “Like a Virgin” are not known to be romantically involved in real life, despite the fact that they go hot and heavy in the movie Weird.

In response to the public’s interest sparked by Weird’s teaser, Yankovic explained to Jimmy Fallon in an appearance on The Tonight Show, “By the way, our relationship is platonic. She and I only truly interacted once, in 1985. I spoke with her backstage for maybe 45 seconds. That concludes the scope of the connection.”

However, Yankovic did acknowledge Madonna as the source of inspiration for that spoof in Behind the Music.

“She allegedly said, “Gee, I wonder when Weird Al’s going to sing “Like A Surgeon,” while walking down the street in New York, while speaking to a friend of hers, according to legend,” he told VH1.

‘ When I heard about it again, I remarked, “That’s not a bad idea.”” The ode to recently graduated physicians was thus established.

In Behind the Music, Yankovic’s buddies chuckle about other presumably steamy celebrity hookups and point out that he has never been promiscuous or particularly fond of making his private life known. The couple welcomed their daughter Nina in 2003, but a few years after the programme aired, Yankovic wed marketing executive Suzanne Krajewski.

Was the “Yankovic bump” a real thing? 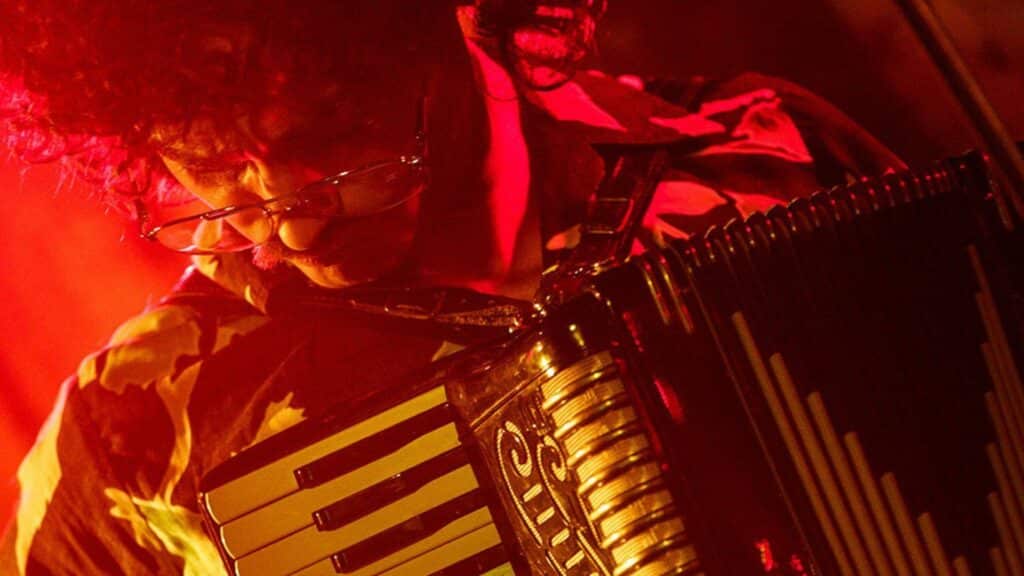 In the movie Weird, Madonna woos Weird Al into making a parody of one of her songs so she can receive the “Yankovic bump,” or an increase in album sales as a result of his humorous interpretation. Yankovic stated during a Yahoo! interview, “One of the things that is based in truth is the Yankovic bump. because some musicians have told me that when my parody was released, their sales increased.”

Need a good example? According to rumours, Yankovic’s interpretation of “Smells Like Teen Spirit” in 1992 increased Nirvana’s sales.

“We received a heartfelt thank-you letter from Nirvana’s company, he continued. “They indicated that after the release of “Smells Like Nirvana,” we sold another million copies of Nevermind. I don’t have all the information in front of me, you know. However, it has sort of — it has undoubtedly occurred more than once.”

Was Weird Al assassinated on stage in 1985?

Not at all! He also didn’t kill Pablo Escobar, a drug baron from Colombia who passed away in 1993 and wasn’t a proven follower of Weird Al.

It’s true that many of the clichés parodied in Weird: The Al Yankovic Narrative are taken from musical biopics, and consequently, if not from Yankovic’s biography, then from someone else’s genuine story. But this climactic joke appears to be a reference to the made-up drama Velvet Goldmine. This glitzy 1998 classic features glam rock legends who remarkably resemble Iggy Pop, Lou Reed, and David Bowie. The Todd Haynes-directed masterpiece features a crucial scene where a rock star is fatally shot on stage in front of a cheering crowd while at the height of fame and vice.

This striking vision seems to have mesmerised Yankovic and his Weird co-writer Eric Appel, who used it for their own bombastically humorous aims, akin to their Carrie nod.

What does Madonna think about Weird: The Al Yankovic Story?

At the world premiere of the movie in 2022 at the Toronto International Film Festival, Appel and Yankovic acknowledged she hadn’t yet watched it.

We will be keeping an eye on the Material Girl’s social media for her opinions now that the Weird Al movie is available on Roku. She’s bound to enjoy Evan Rachel Wood’s charming reimagining of her 1980s era, at the very least, don’t you think?