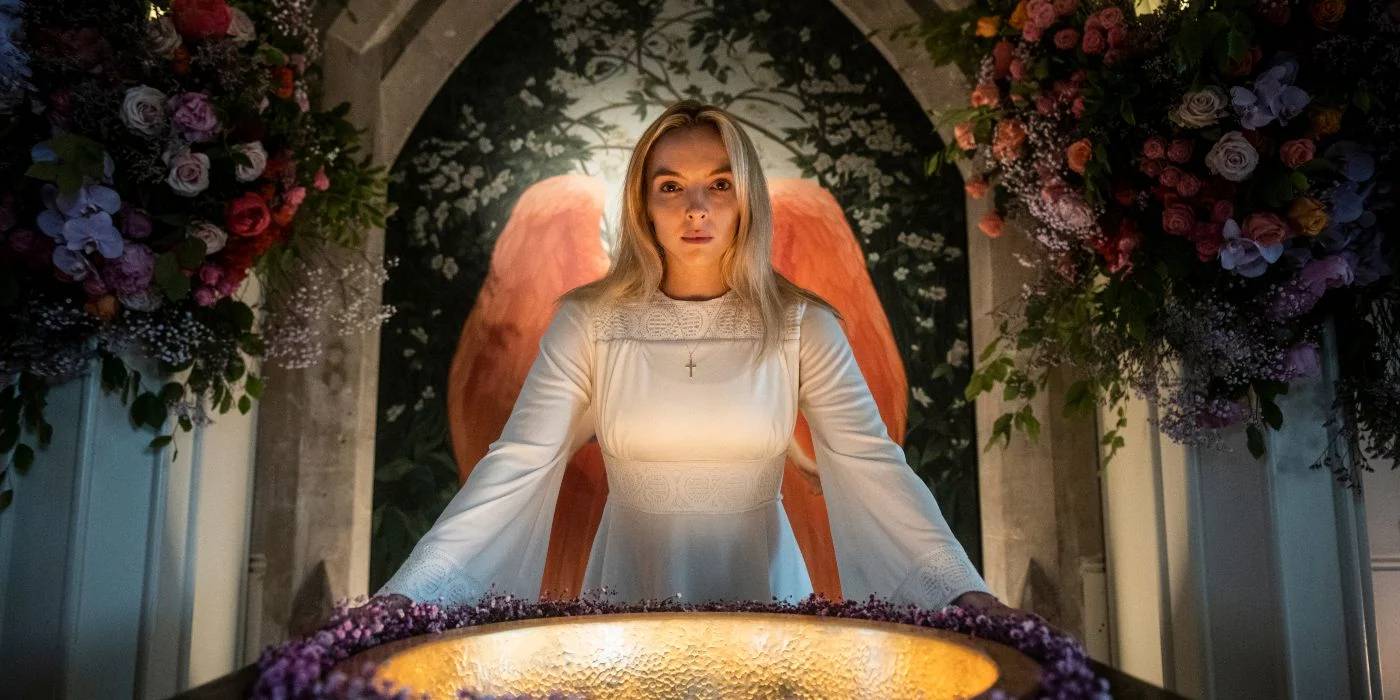 Eve has taken the concept of “taking your work home with you” to an unfathomable new level during the last three years. Her developing obsession with Villanelle has not only damaged her marriage and nearly killed her now-ex-husband, but it has also ruined her professional life. Killing Eve redefined the spy thriller genre from the start, infusing it with romance. The devastating implications of Villanelle and Eve’s separate lines of work have prompted them to rethink what their purpose is on a daily basis. Was it fate that brought them together, and can they truly live happily ever after? After watching these enemies-turned-soulmates grow up, mature, and come to terms with their past misdeeds throughout the course of the series, it’s evident that they at least deserve one.

It’s been over two years since we last saw Villanelle and Eve on London Bridge. They had just witnessed a tense and brutal exchange between Carolyn (Fiona Shaw), Paul (Steve Pemberton), and Konstantin (Steve Pemberton) (Kim Bodnia). They were well aware that Carolyn’s kid Kenny did not jump to his death and that it had to be staged. Paul, who had been hired to keep Carolyn in check at work, was actually assisting the Twelve (the under-the-radar group responsible for Villanelle). Konstantin (who could be Kenny’s father?) was concerned that Kenny’s research into unmasking the Twelve would land him in trouble, so he tried to talk him out of it and pushed him to explore other, safer pursuits. Kenny, on the other hand, was wary of Konstantin’s genuine motives and backed away from him during their secret rooftop conversation. He backed away a little too much, though, and died as a result. Carolyn ended the evening of confession by shooting Paul in the head.

Eve and Villanelle were busy processing those revelations, as well as everything else that had led them to that precise moment under the stars. They both admitted that as long as they’re together, there will be conflict. They can’t picture a future without the other, though. Villanelle and Eve emotionally and reluctantly parted ways after some tender reflections, with the aim of never seeing each other again. Kahlil Gibran, a Lebanese novelist, once said, “If you love somebody, let them go, for if they return, they were always yours. If they don’t, they never were.” 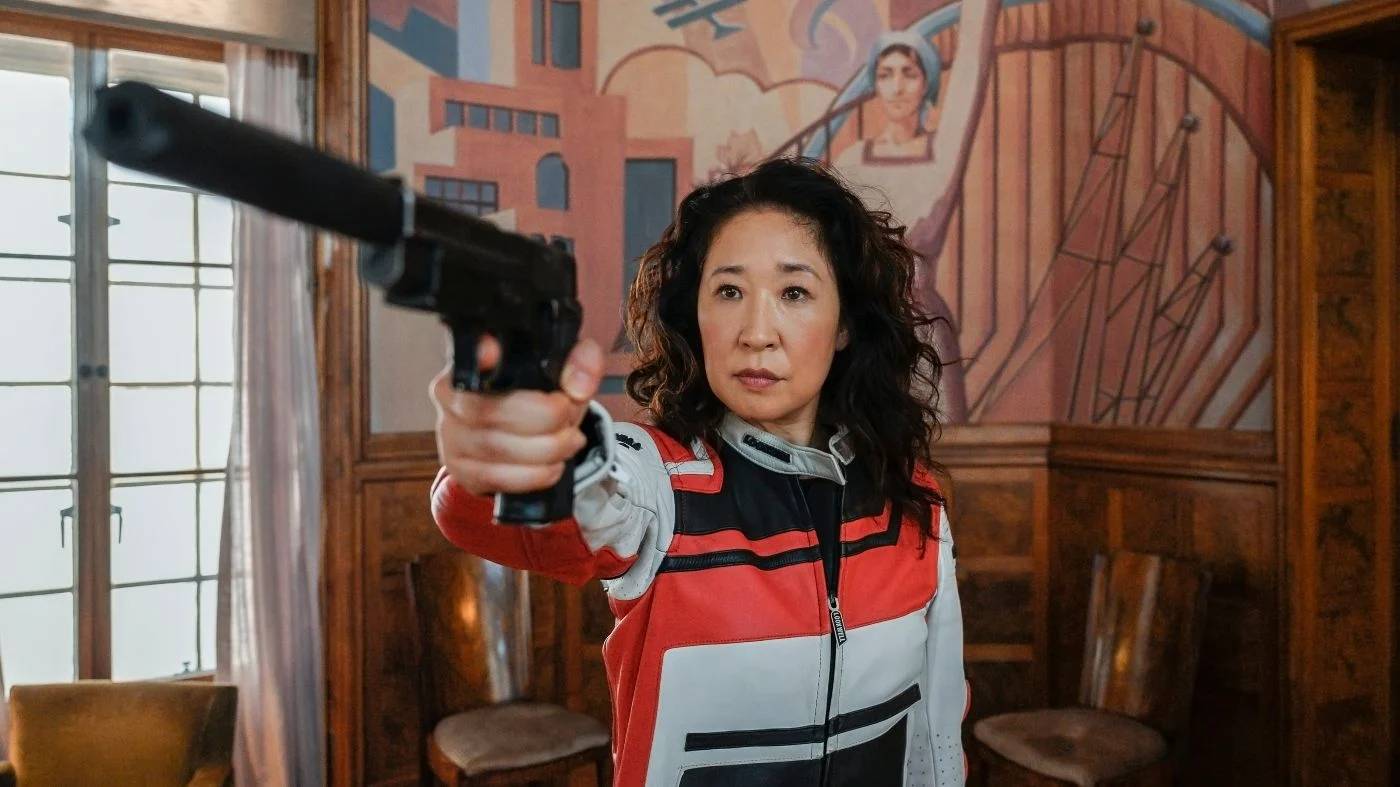 The Killing Eve Season 4 premiere never slowed down. We knew we’d be in for a wild and unexpected journey from the moment the location title card of “Russia” appeared on the screen (is there anything more pleasant than that sound?). A biker zips down a substandard highway, helmet and all, radiating resolve. A poster of a smiling Konstantin who is… running for office? hangs on one of the decrepit walls of an abandoned building. Maybe even a re-election? The unnamed motorcyclist approaches a building, takes out their gun, and instantly assaults and defeats a security guard. Your first instinct could be to assume it was Villanelle under the helmet, but any seasoned and dedicated spectator knows this guy didn’t have Villanelle’s gait or swagger.

Konstantin is dressed up and receiving a head massage, which is the most we’ve ever seen him. When the mystery guy holds him at gunpoint, his pampering session comes to an abrupt stop. What’s wonderful about Konstantin’s reaction is that he doesn’t have one. He’s been held at gunpoint before, after all (ahem, Carolyn). It’s just a nuisance at this point. The biker removes their helmet, exposing Eve to be the one wielding the weapon. For his role in Kenny’s death, she shoots Konstantin in the hand and demands that he tell her where she may find Hélène. (Do you really believe it’s that simple, Eve?) Konstantin admits he has no idea where Eve is, but advises Eve to locate and monitor a potential assassin instead. Hélène isn’t far behind Eve if she finds a new recruit. The only issue, according to Konstantin, is that the previous one, Rhian, was forced to her death. (Typical Villanelle maneuver.) Eve reluctantly accepts this information and sets out on her new task. But Konstantin asks her the million-dollar question: why doesn’t she just ask Villanelle if she genuinely wants to find Hélène?

What’s more, where is that troublemaker? Singing is probably the last thing you’d expect her to do. In a church, actually. In front of an audience. Villanelle’s lyrics pretty much sum up why she’s where she is before we even had a chance to close our now-wide open mouths: “You converted me into a believer.” Now I’m moving up. Yes, I’m no longer in the dark. My light continues to shine.” She’s repeating it to herself more than anyone else, almost as if she’s giving herself a pep talk about her identity dilemma. Though Eve and Villanelle believe they have discovered their new calling in life, the truth is that they have never been more lost than they are right now. 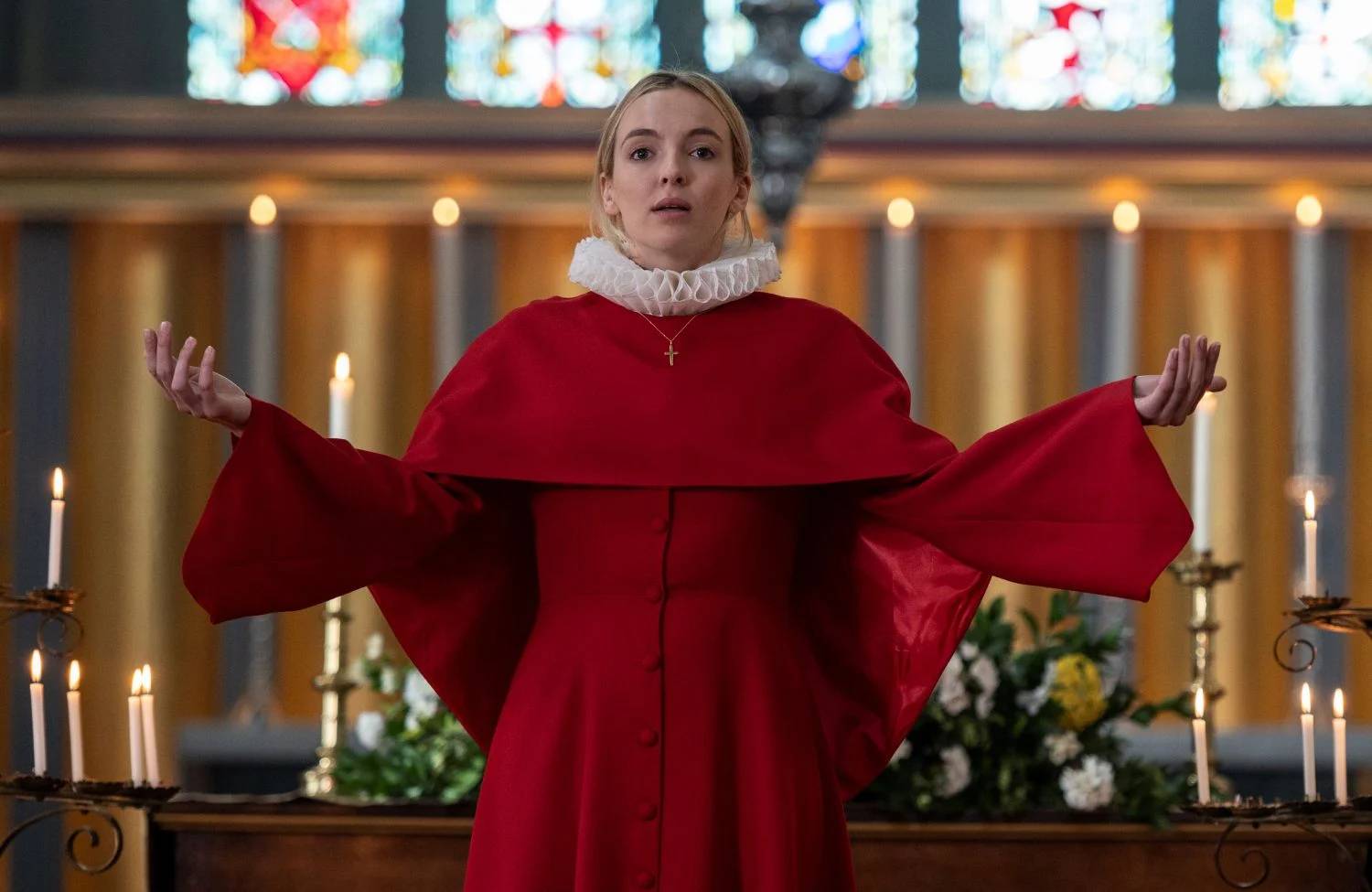 Eve has been residing in a hotel while Villanelle has been repenting for her misdeeds. The Twelve and everyone she’s met in the last few years are documented on the wall of her closet: Raymond, Dasha, Fat Panda, Konstantin, and, of course, Villanelle. Then we meet Yusuf (Robert Gilbert), who has been assisting her on her epic vengeance expedition. We quickly learn that they have a friendship-with-benefits arrangement, yet if Eve is dragged back into Villanelle’s gravitational pull, Yusuf is likely to be dropped like a hot potato. (We’re all aware of how her marriage ended.) When Eve receives an invitation to Villanelle’s (now known as Nelle Petrova) baptism, her cheerful demeanor begins to fade. Eve tears it up without hesitation.

We’re then dropped off in Mallorca, Spain, where we’re reunited with Carolyn, who’s now working as a less-than-enthused cultural attaché between Spain and England. She pines for the thrills and challenges she had when working for MI6. She’s now trying to remain awake while listening to her itinerary, which includes judging a sand sculpture competition and imparting British culture to local kids. She does, however, obtain some confidential information from a former pupil named Milos, and learns about a recent and heinous crime. Hugo, an old friend and now antagonist, interrupts Carolyn’s meeting. Remember how he was shot on the job in Season 2 and Eve decided to leave him for dead so she could save Villanelle? (Those were the days, eh?) After being elevated to the suddenly vacant seat on the Russia desk, he’s back and better than ever. (I’m curious as to who held the position.) Carolyn is warned not to interfere with his efforts or he will have her arrested for Paul’s murder. (He can prove it with images.)

Villanelle is going all-in on her new persona. She wears a “What Would Jesus Do?” t-shirt and prepares fish and loaves for the people she lives with (a vicar named Phil and his adult daughter May). She’s perfectly pleased to live with them indefinitely, but Phil hopes she finds a place of her own shortly. She prays for a fresh start and tries to form a bond with their cat, Lucifer. Villanelle’s deadly instincts take over as she “accidentally” flings Lucifer into the wall after being bitten by the cat. Villanelle looks horrified at what she just did as a lifeless Lucifer floats in the bathtub. 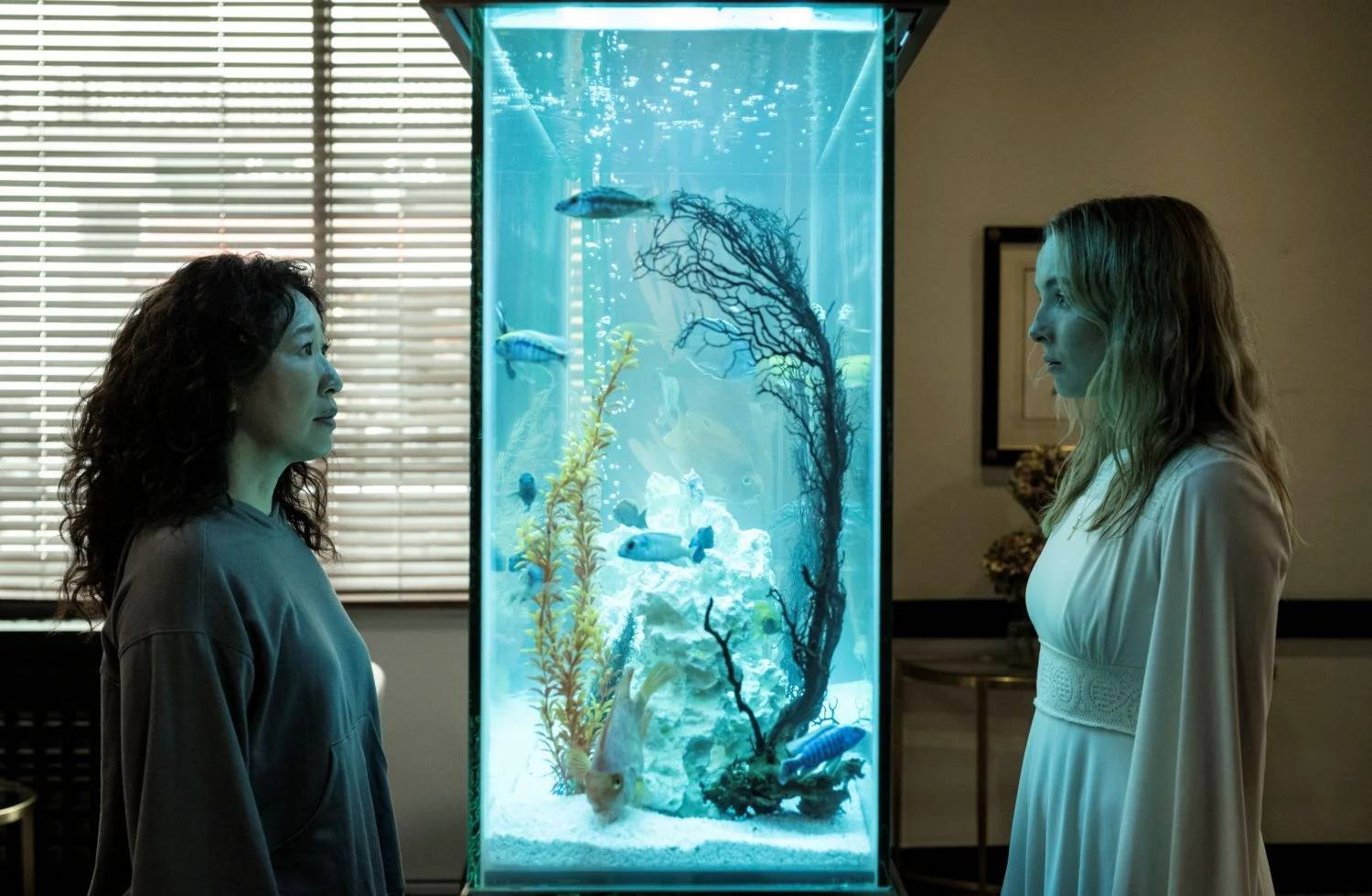 Carolyn interrupts Eve’s jog to request that she look into a series of tortures and murders that have been occurring among the Twelve. They’ll be able to take down the Twelve if they can identify those folks, right? Villanelle practices her baptism in the pews, trying to find the greatest place for her guests. Her apprehensive, enthusiastic spirit is reminiscent of a child anticipating her parents’ attendance at her recital. Villanelle’s guest, however, will not be present.

Eve dresses up as Rhian’s old teacher and strolls over to the funeral home where she was laid to rest. Pam, a meek undertaker, is directed to her, but she doesn’t know much about Rhian or Hélène (so she says). Eve, on the other hand, is persuaded that this Pam person is Hélène’s newest recruit. Eve walks into her hotel lobby and stares aimlessly into a fish tank. She then encounters a newly baptized Villanelle, who calmly forgives her for not attending her “rebirth.” Eve’s interaction with Villanelle is startlingly cold and dismissive, especially given that the last time they met, she told her she couldn’t imagine a future without her (ah, the bridge scene). Villanelle is calm and accepting, but Eve doesn’t want anything to do with her. But, once again, can we really believe that? Eve is well aware that she does not have the best track record. She claims to have changed and begun a new life, yet she is still consumed by the Twelve. How long will she maintain her “too cool for you” persona? Was that slap really necessary, Eve? Perhaps she realized that doing so would only increase Villanelle’s desire for her. Their brief exchange perfectly captures the underlying tension. “If you had truly changed, you wouldn’t have come here,” Eve says, to which Villanelle responds, “If you had truly changed, you wouldn’t have let me.” 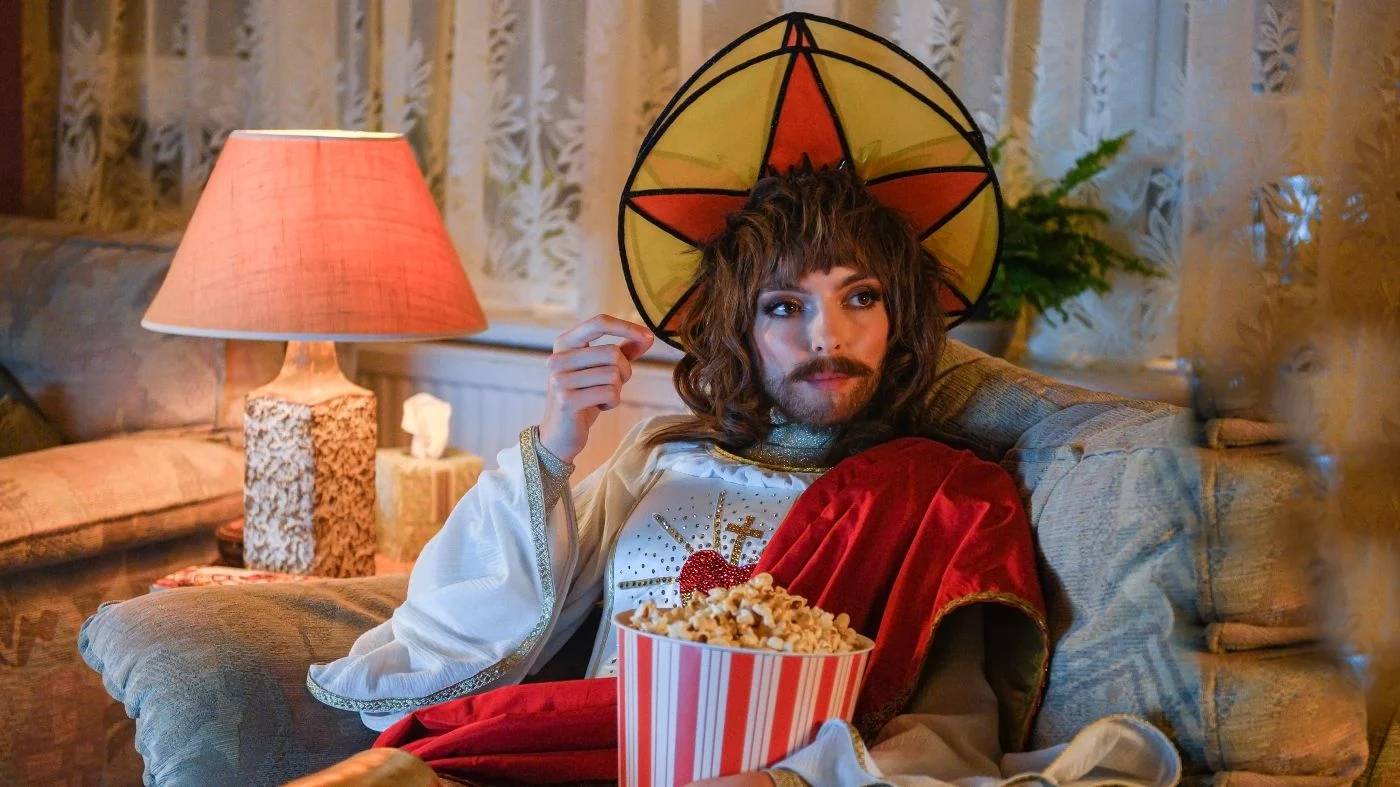 Pam pursues Eve, but she catches up with her and knocks her up in an alley. When Eve witnesses Pam get into a car with Hélène, she hobbles on and finds the evidence that backs up her suspicions. While this is exactly what Villanelle wants others to think, hearing it out loud doesn’t sit well with her. May is nearly drowned in the baptismal font, but she is yanked out just in time. Was Jesus a mediator?

I actually meant it when I said unexpected things happened in this episode. Villanelle gets the surprise of her life just before bedtime. Is that…Jesus Christ, sitting in the living room, wearing gold high-heeled boots, full facial hair, and eating on popcorn? He also has Villanelle’s appearance. Villanelle says she’s eager to be saved, tears in her eyes and a grin on her face.