No matter if you’ve been a fan for a long time or are just discovering the show now, “Naruto” has a character for you. Hinata Hyga, a bashful kunoichi of the Hyga Clan who grows up to marry her lifelong love, Naruto Uzumaki, is one character who has captured fans’ attention from her debut. Hinata was an ordinary girl who wanted to push herself outside of her comfort zone and prove her value to the world, which set her apart from the big cast of fearless fighters. Fans also identified with Hinata’s crush on Naruto, the class clown. Hinata admired Naruto for never giving up when the going got tough and always standing out, although many feared and avoided him because of the nine-tailed demon fox that was locked inside of him. In many ways, he was the person Hinata wished she could be.

Hinata developed her confidence through the course of “Naruto” and “Naruto: Shippden,” and eventually snapped Naruto out of his denial just when he needed it. Hinata achieved the fairytale wedding of her dreams and gave birth to two children, Boruto and Himawari Uzumaki, as a result of her tenacity and hard work. But Hinata Hyga is more than just the ninja girl down the hall.

Her Byakugan can see 20 kilometers away 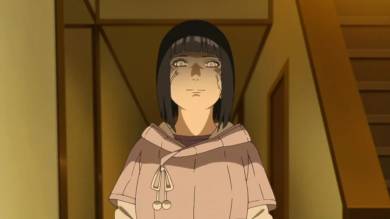 Hinata Hyga, a member of the Hyga Clan, possesses the vast abilities of the Byakugan. With the exception of a small blind spot at the back of the neck above the first thoracic vertebra, the Byakugan gives its users an almost 360-degree range of vision around themselves. All Hyga Clan users have access to the Byakugan’s potential, but it is up to each person to wield it to its fullest. Neji Hyga’s Byakugan range was 50 metres when she was younger. His range had extended to at least 800 metres by “Naruto: Shippden” time. In contrast, Hinata’s Byakugan could travel up to 20 kilometres, as was shown during the conflict with Toneri in “The Last: Naruto the Movie.” Hinata can also recognise genjutsu practitioners and spot the tiniest hint of chakra presence using her Byakugan. In the anime, Hinata had infrared vision, which she could even use to enhance the appearance of small objects.

Her original introduction happened much later 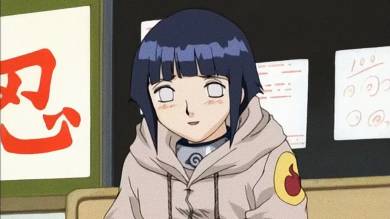 Hinata Hyga has always been a part of the “Naruto” franchise for anime viewers. Hinata could be seen discreetly supporting her crush, Naruto Uzumaki, in the first television episode of the original “Naruto” anime series that aired in the early 2000s, as he prepared to use a clone jutsu but failed to successfully execute the move. Hinata isn’t present in the manga’s first chapter, though. This is due to the fact that she didn’t formally enter the series until Chapter 34, which serves as the start of the Chnin Exams story arc.

Why the alteration? It’s difficult to know for sure. But having Hinata visible in the first episode’s background seems reasonable given that she has always been a student at the Academy. The fact that Hinata already has feelings for Naruto early on in the narrative is a wonderful tease for manga fans. Hinata’s appearance in the first episode of “Naruto” gives the world more depth and life. Additionally, it is more satisfying to see potential key characters already included in the ensemble than than having them suddenly appear when necessary.

Many believe she’s more of a heroine than Sakura 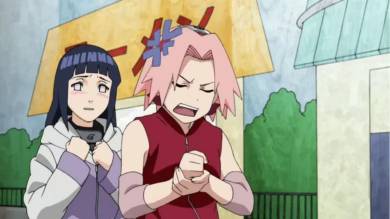 Many people do not view Sakura Haruno as the primary heroine of the “Naruto” series, despite the fact that she was a member of the main cast and one of the three members of Team 7. Masashi Kishimoto, the creator of the series, claimed in an interview at Jump Festa 2010 that his coworkers thought Hinata Hyga was more of a heroine than Sakura. The fan base has also expressed this, as Hinata has ranked higher than Sakura in a couple Shonen Jump character polls. In an interview with Viz Media in October 2015, even Kishimoto said that Hinata is his favourite female character because of her benevolence. The anime has even made note to the strong preference for Hinata over Sakura, with Sakura accusing Hinata of seeking to displace her as the series’ main heroine in the omake for Episode 165 of “Naruto: Shippden,” much to Hinata’s consternation. Funny Naruto intervenes to clarify that Hinata’s inclusion in the new end-credits sequence, which features the outro song “Bicycle,” is due to support from the animation crew.

She developed her own jutsu at the age of 16 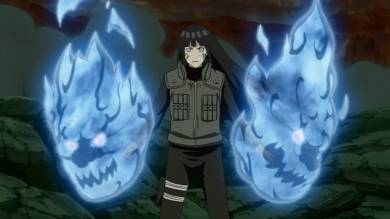 In “Naruto” and “Naruto: Shippden,” Hinata Hyga didn’t receive nearly as much attention as the other characters did, making it difficult for her to showcase her incredible ninja abilities. Even while Hinata was kindhearted, she wasn’t a pushover. Her creation of the Gentle Step Twin Lion Fists jutsu at the tender age of 16 was actually her finest achievement. Hinata created the move with the aid of her cousin Neji Hyga, changing the shape of the chakra emitted from both hands into enormous lion-shaped shrouds for maximum range and deadly power. The anime claims that Hinata created this move after learning about Naruto Uzumaki’s Wind Release: Rasenshuriken from Ino Yamanaka. The Gentle Step Twin Lion Fists is a very challenging skill that needs careful chakra management. Hinata is the only person who has ever been canonically depicted using the move, despite the fact that it is thought to be unique to the Hyga Clan. Her sister Hanabi Hyga, who employs the tactic in “Naruto” video games, is not included in this.

She is the Legendary Queen of Gluttony 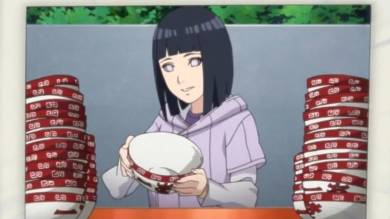 Who would have imagined that Hinata Hyga, who is so lovely and modest, would have such a monsterous appetite? But in the omake that followed “Naruto: Shippden” Episode 95, Hinata triumphed over every challenger in Kakashi Hatake’s all-you-can-eat ramen competition. She even defeated Naruto Uzumaki, who breathes air like he does when he eats ramen—her future husband. Despite the fact that this occurred in a parody anime clip, Hinata’s ramen win is still regarded as canon and was brought up once more in “Boruto: Naruto Next Generations.” Boruto Uzumaki is astonished to discover that his mother was crowned the “Legendary Queen of Gluttony” after consuming 46 bowls of ramen like it was nothing in “Boruto” episode 18, “A Day in the Life of the Uzumaki Family.” It makes sense why Naruto and Hinata make such a good team. Let’s hope Boruto can meet someone special who has a hearty appetite like his mother.

She only failed one subject 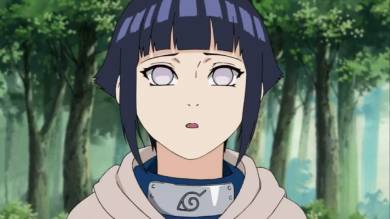 Nobody watches “Naruto” to get a detailed look at the characters’ academic development. But when it comes to Hinata Hyga, admirers ponder how effectively this reserved genin handled her responsibilities at the Academy. Was she, like Sakura Haruno, a straight-A student? Or perhaps a failure like Naruto Uzumaki? Hinata was an above-average student, according to the Hy no Sho, also known as “Naruto Secret: Scroll of Soldiers Official Fanbook.” She received As for teamwork, classroom attitude, and taijutsu, and Bs for ninjutsu and genjutsu. Hinata did poorly in only one subject, positivism, where she naturally received a failing grade. According to “Naruto: The Official Character Data Book,” Hinata has only completed 33 official missions for ninja operations, earning 10 D-rank, 14 C-rank, 8 B-rank, 1 A-rank, and 0 S-rank. The missions Hinata completed in the TV series that were exclusive to the anime are not included in this.

She wasn’t originally a ninja 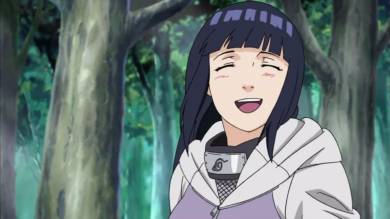 The youthful Hinata Hyga stood out among the many strong characters in “Naruto” like a sore thumb. She lacked the self-confidence that radiated from her classmates and fellow pupils since she was timid, frail, and lacking. Hinata’s fragility made it difficult to imagine how she could ever train to become a ninja. Well, “Naruto: The Official Character Data Book” claims that Hinata Hyga wasn’t intended to be a ninja, at least not in the original plan for the series. The kunoichi were shown in the early concept art for Hinata Hyga, which was shared by the series’ author Masashi Kishimoto, dressed in a frock. If Hinata was initially intended to be a typical girl, that could help to explain why her early portrayal focused so much on her timid nature. It should be noted that Hinata was always intended to be Naruto Uzumaki’s love interest, and the initial drawing of her wearing a dress may reflect that. 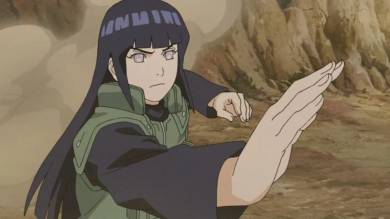 It’s simple to mistake Hinata Hyga for an indifferent warrior because of her compassionate, friendly, and softhearted demeanour. Despite her timidity, Hinata yearned to establish her value in the eyes of everyone, particularly her family. In light of this, Hinata reportedly wished for a rematch with her cousin Neji Hyga in the character databooks. As “Naruto” fans are aware, Hinata lost her match with Neji during the Chnin Exams storyline. Hinata wanted to battle Neji again, perhaps to demonstrate her improvement as a fighter, despite the fact that Naruto vanquished Neji in her honour. Neji gave his life for Naruto and Hinata in episode 364 of “Naruto: Shippden,” hence a rematch is sadly impossible.

Since Hiashi originally gave up on Hinata becoming the Hyga Clan’s future leader when she was a child in favour of concentrating on her sister, Hanabi Hyga, it is likely that Hinata’s desire to fight her father, Hiashi Hyga, stems from the same motivation as her desire to fight Neji. We now know that Hiashi and Hinata’s relationship has improved. This is because Neji’s narrow outlook on life was altered by Naruto before his death, which caused Hiashi to reexamine his own philosophy and interpersonal interactions.

She was always meant to be with Naruto 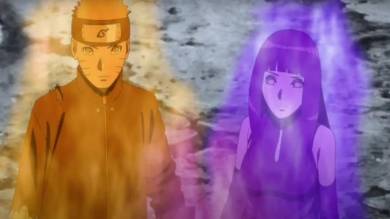 Hinata Hyga’s long-standing crush on Naruto Uzumaki is one of her defining characteristics. Before the manga’s conclusion, many readers pondered if Hinata would be able to win Naruto’s affection or if he would choose Sakura Haruno instead. It was always intended for Hinata and Naruto to be together, claims the creator Masashi Kishimoto. According to Kishimoto, Hinata and Naruto were destined to be together because Hinata recognised Naruto’s value before even Iruka Umino did. A “messy love triangle,” as Kishimoto called it in the 2017 Jump Festa interview, was created even though Naruto initially developed a crush on Sakura during the early plots. With regard to “The Last: Naruto the Movie,” which concludes with the two lovers finally getting married and having two children, Kishimoto, who has acknowledged feeling awkward when writing about romance, commended the anime staff of Studio Pierrot for elaborating on Naruto and Hinata’s love story. A few of the staff animators were likewise overjoyed that Naruto and Hinata had finally gotten together and that it could be animated.

There’s a deeper meaning to her children’s names 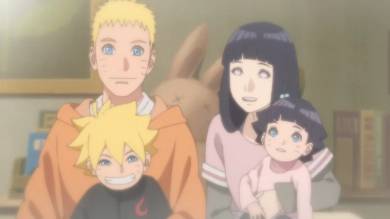 Boruto and Himawari Uzumaki are the names of Hinata Hyga’s kids, and they have deeper meanings connected to the Hyga Clan. Neji Hyga, Hinata’s cousin, gave his life in “Naruto: Shipp’den” to save her and Naruto, and Boruto was given his name in his honour. Masashi Kishimoto claimed in an interview with Movie Walker that the name Boruto was intended as a tribute to the late character Neji since “Boruto” () is the Japanese pronunciation of the English word “bolt,” whereas Neji’s name has the meaning “screw” (). Himawari’s name () translates to “sunflower” in Japanese. However, the first two kanji can also be read as “Hinata” if they are inverted (), spelling “Hyga.” Further research reveals that “Hinata” and “Hyga” both refer to a “place in the sun.” Helianthus plants, generally referred to as sunflowers, lean toward the sun during the day to receive enough light to bloom. As you can see, Himawari’s name means more than just “beautiful flower,” as you may have guessed.