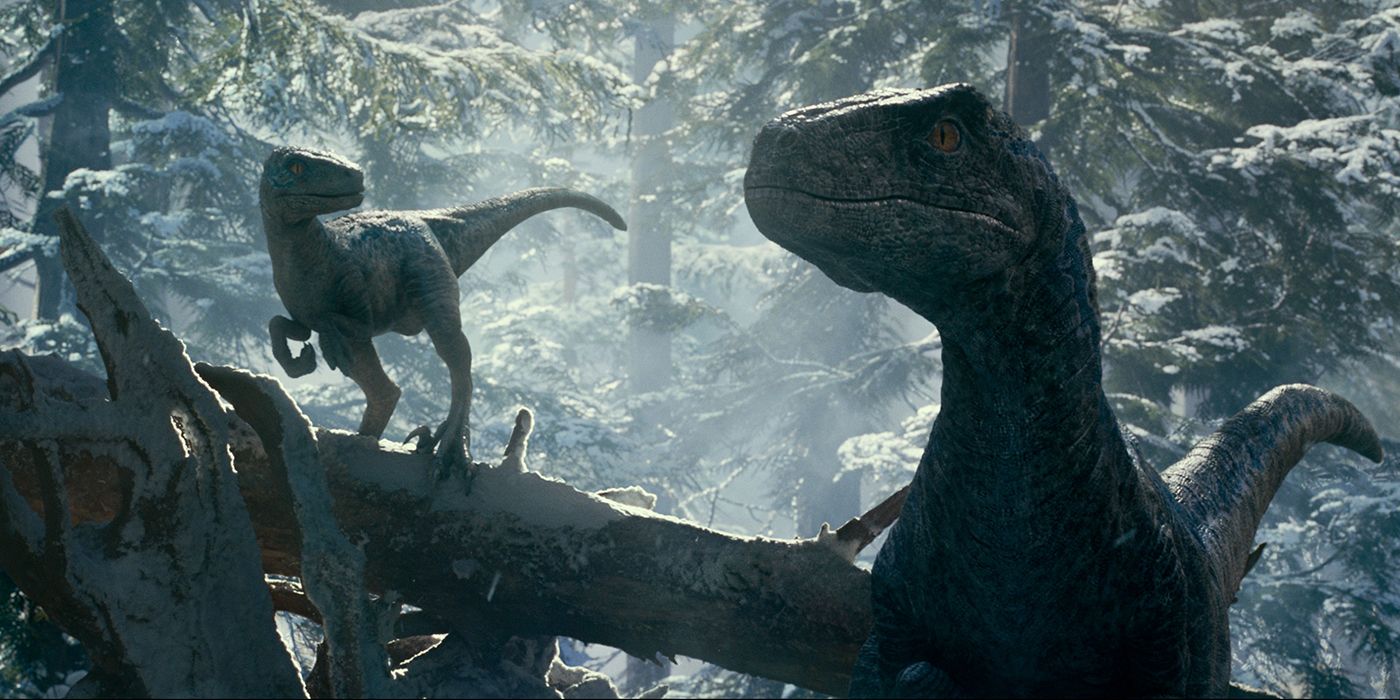 How many mosquitoes that feed on dinosaurs did InGen manage to acquire? With dinosaurs roaming free and a villainous genetics business using Moses’ tactics against Egypt, Jurassic World: Dominion ought to have had plenty to deal with. Nevertheless, it added a few additional species to the series’ list. No more than any of the Jurassic films, their appearances in the movie won’t help you on a scientific test, but as characters in a story (or the film’s independently released prologue), they all contribute. Here is a brief description of the new saurian characters in the series, along with what palaeontologists believe to be their current interpretations (dinosaurs exclusively, sorry Dimetrodon and Quetzalcoatlus): 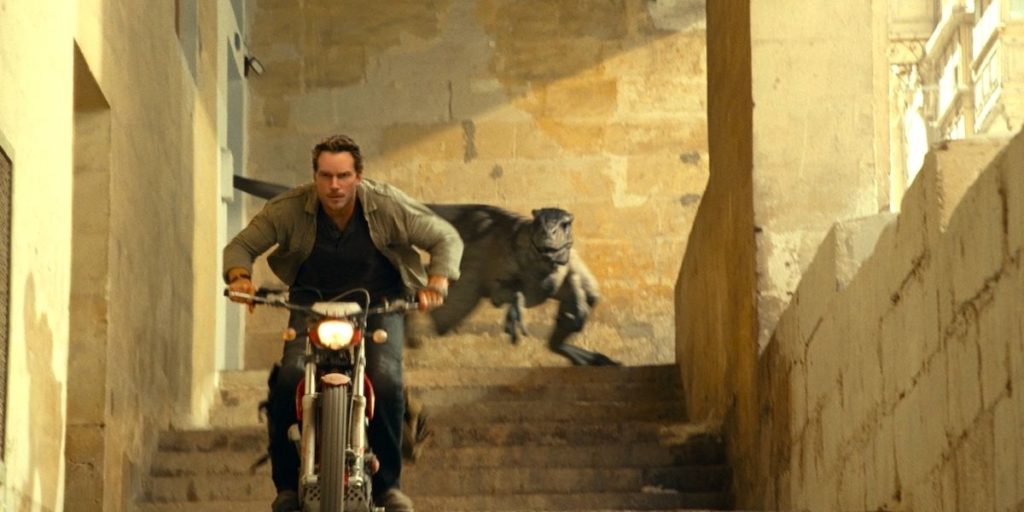 After serving as the film’s main antagonist, the Velociraptor became well-known. Other dromeosaurids are joining in with Dominion. The illegal trade in dinosaurs seen in Fallen Kingdom has not stopped, and when Chris Pratt’s Owen Grady and Bryce Dallas Howard’s Claire Dearing arrive in Malta in search of their adopted daughter Maisie (Isabella Sermon), they come into contact with some dino smugglers. They are being pursued by a pack of Atrociraptors as compensation for their troubles. These venomous bloodhounds, each bred with a colour that corresponds to its name, chase after our heroes and wreck havoc in the city. They and all the other dinosaurs that escape, that is.

Around the same time as Tyrannosaurus rex inhabited the area, the actual Atrociraptor lived in what is now Alberta, Canada. Similar to its distant cousin Velociraptor, the size of the Atrociraptor was greatly inflated for the film industry; if you ever came across one, you’d be dealing with something approximately knee height. Additionally, it would have been covered in feathers. Although there are no known fossils of Atrociraptor with feather impressions and the genus is not well characterised, it is a reasonably safe assumption that all dromaeosaurs had full coats. However, I’d be more willing to wager that they were available in high-end hues. Additionally, the evidence for pack hunting in dromaeosaurs in general is scant, and neither Atrociraptor nor Velociraptor-specific data exists. Not that it lessens the pleasure of seeing a pack of sickle-clawed reptiles charging at you in a well-made movie. 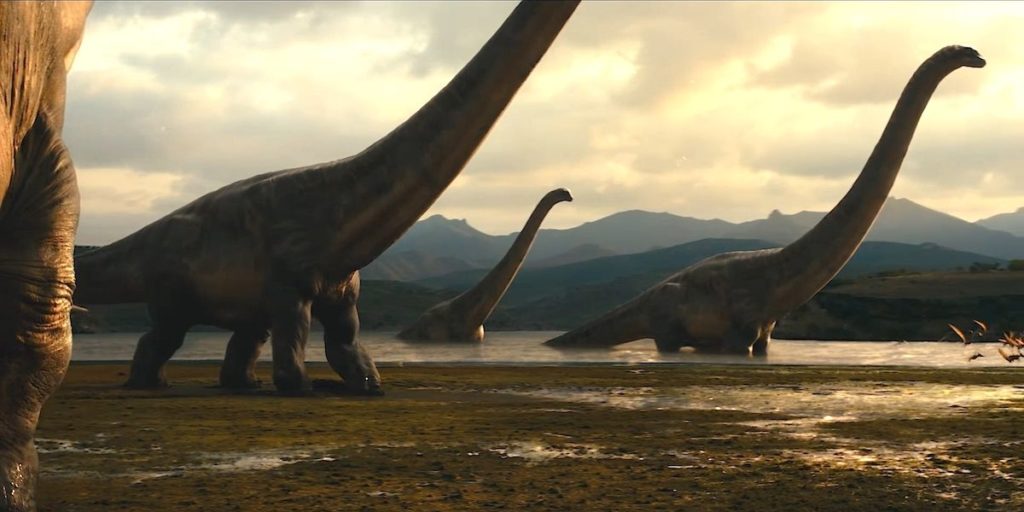 Dreadnoughtus has shown as an Easter egg in each of the Jurassic World movies, but the Cretaceous sauropod made its public debut in the Dominion prologue. A group of Dreadnoughtus were seen plodding through the muck as the prologue began. While looking into Biosyn’s evil activities, Alan Grant (Sam Neill) and Ellie Sattler (Laura Dern) catch a glimpse of the species, and at the end of the movie, a pair of them relax in a lake. Although they only have a cameo, they are nevertheless really impressive to look at.

Of course, any creature that was two stories tall and 85 feet long would undoubtedly make you gasp for air. Although Dreadnoughtus wasn’t the largest dinosaur ever, it was a contender, and because of its very intact bones (unusual for a sauropod), measurements of its size and weight are a little more reliable than those of some of its larger relatives. It would have been alive during the Late Cretaceous period and would have roamed what is now Argentina. 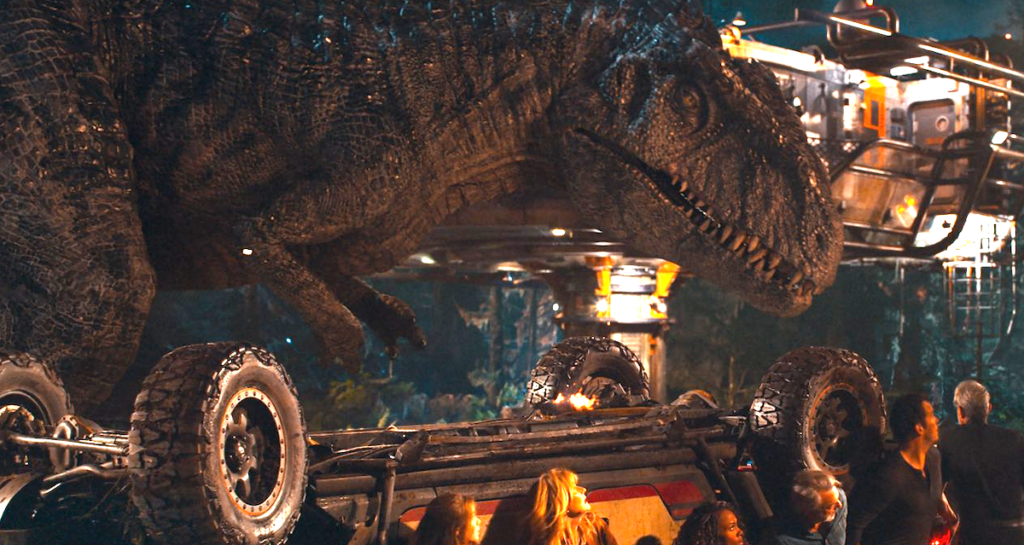 You may anticipate that Giganotosaurus—rather than scientists and locust plagues—would serve as the major antagonist given that director Colin Trevorrow referred to it as “the Joker.” As it is, the Southern Huge Lizard is a kind of giant guard dog that Biosyn developed, maintained close to its refuge in Italy, and controlled by a chip in its brain. It doesn’t really join in on the action until the compound starts to burn. Until a T. rex and a Therizinosaurus oppose it, that appears to be the greatest moment for a Giganotosaurus to hunt down human prey. Giganotosaurus successfully defeated the t. rex on its own earlier in the movie, but it falters when faced with two adversaries at once. I have to admit that I don’t sense the Joker here.

In the Dominion prologue, a Giganotosaurus faced off against a T. rex and won, a confrontation that was inconceivable during the Mesozoic era. Tens of thousands of miles south of T. rex’s range and millions of years earlier, the Giganotosaurus lived in what is now Argentina. I wouldn’t have bet on Giganotosaurus even if they were able to fight. As ridiculous as the “who would win in a fight” debate may sound, the T. rex was likely more agile, had superior vision and smell, and had the strongest biting force of any known terrestrial mammal. Though theoretically larger than T. rex and well-adapted to be the top predator of its era and environment, it’s difficult to see the giant sauropod dominating a fight without the aid of a screenwriter. 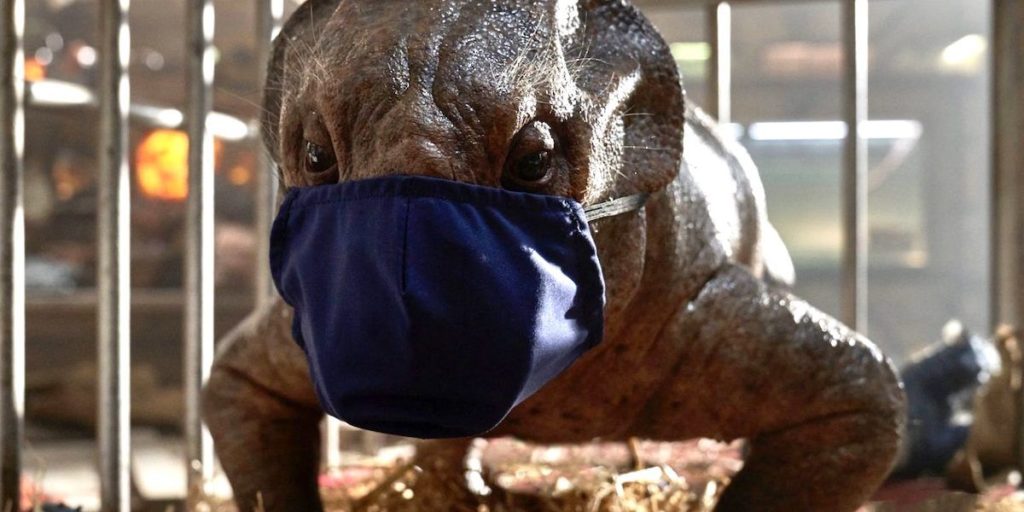 Microceratus makes an appearance with Dominion and is mentioned in Jurassic World: Fallen Kingdom, though it does not significantly advance the plot. When it walked the planet during the Cretaceous period, namely Asia, this little fellow barely protruded above our ankles. It belonged to the ceratopsian group, which included Triceratops and other dinosaurs with beaks, frills, and occasionally horns. While Microceratus lacked the arsenal of its later relative, it could stand on two legs. 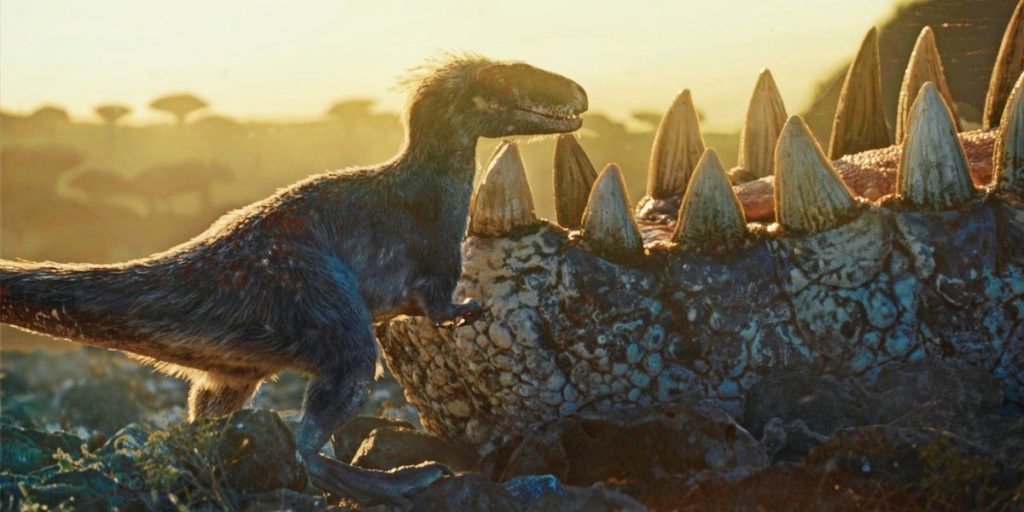 Another member of the tyrannosauroid group, Moros intrepidus, gave the Giganotosaurus a dental cleaning before it did the same for T. rex in the Dominion prologue. The Moros probably avoided becoming supper because of behaviour like this, which is similar to the alleged symbiosis between modern plover birds and crocodiles, although its genetically modified descendant only received a walk-on in the main feature.

A few million years before T. rex appeared, a true Moros would have been approximately shoulder height and discovered in and around modern-day Utah. The publication that named Moros and investigated its bones was only released in 2019, making it the most recent documented species to have made it into the Jurassic series. It is the oldest known Cretaceous tyrannosauroid to have inhabited in North America. 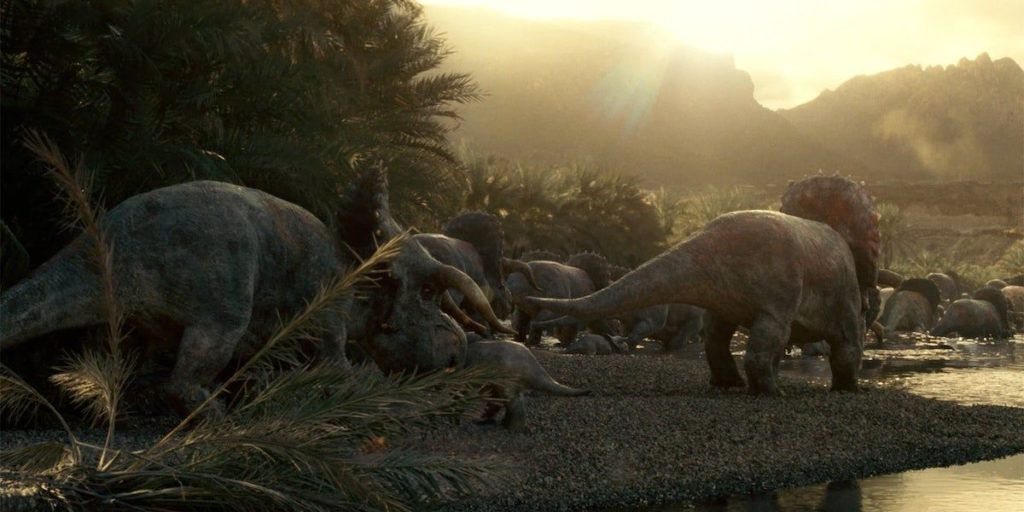 The “Battle at Big Rock” short that came before Dominion featured Nasutoceratops prominently. When a herd of Nasutoceratops, Sinoceratops, and Triceratops accidentally aid Claire and members of her Dinosaur Protection Group in escaping from poachers, they start things off. That adorable infant that Ellie and Alan were gushing over in publicity shots is also a Nasutoceratops.

You can’t deny that the name Nasutoceratops, which means “large-nosed horn face,” is a fitting one. It had the longest pair of long, curving horns of any centrosaur, and a very huge beak. It would not have herded with the two ceratopsian dinosaurs that it does in Dominion; Sinoceratops lived at the same time but in a different location, and Triceratops lived in the appropriate location but at a different time. 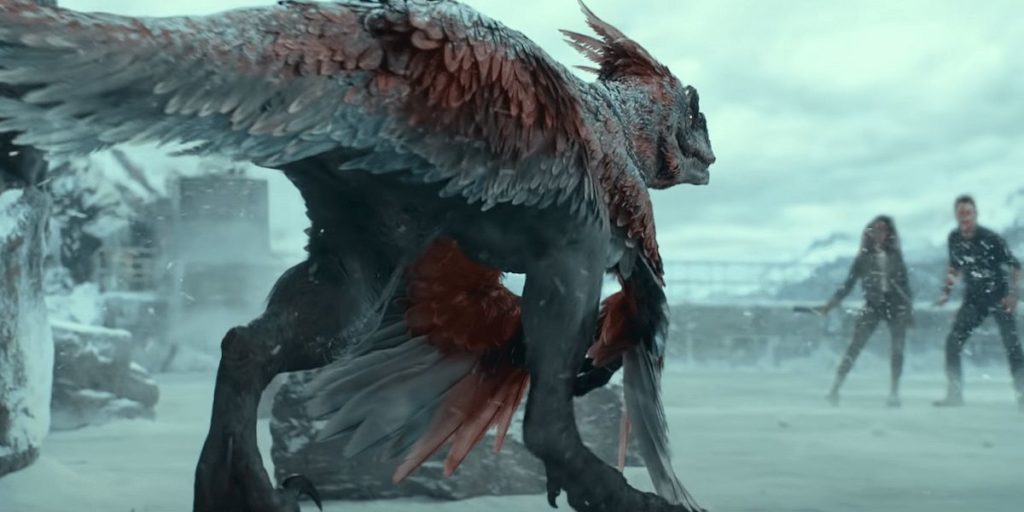 Dino-nerds who desire feathered raptors, rejoice: Pyroraptor, a third dromaeosaur, was introduced by Dominon, who also gave it a full set of wings. It appears to cause difficulties for Owen and Kayla Watts (DeWanda Wise) as they attempt to meet Claire. The fact that this hawk can swim quickly added to the two people’s confusion if the feathers weren’t enough. Despite all of its distinctive characteristics, the Pyroraptor turns out to be less lethal than its cousin, the Velociraptor, did in earlier movies.

Although there is no concrete proof that raptors swim in this manner, it is neither impossible nor a poor idea for a monster movie. However, a single Pyroraptor wouldn’t have been as frightening as it appeared. The genuine thing stood at roughly knee height; this raptor was scaled up to fit in the movies. During the Cretaceous era, you might have seen them strutting around in France and Spain.

The polar opposite of a T. rex is what? Therizinosaurus might be a good choice if you simply considered arm size. This 30-foot-long creature, one of the last of the genus that bears its name, roamed over Asia during the Cretaceous epoch while having enormous arms that held enormous claws. Therizinosaurs were among the few non-avian, herbivorous theropod dinosaurs, and it is thought that they used their arms as rakes to draw prey into their beaks.

Dominion portrays Therizinosaurus as being more evil than his diet would lead one to believe. The blind specimen of Biosyn doesn’t like to have its area invaded. During the action-packed climax, the Giganotosaurus makes the mistake of coming into contact with it, almost missing out on chomping Claire. Therizinosaurus manages to outlast the carnivore, but T. rex is required to finish it out. I don’t think it would be possible for two separate dinosaur species to coordinate a strategy to impale the adversary into the therizinosaur’s claws, but that’s what the movies are for.

What Are The Names Of All Dinosaurs In Jurassic World: Dominion?