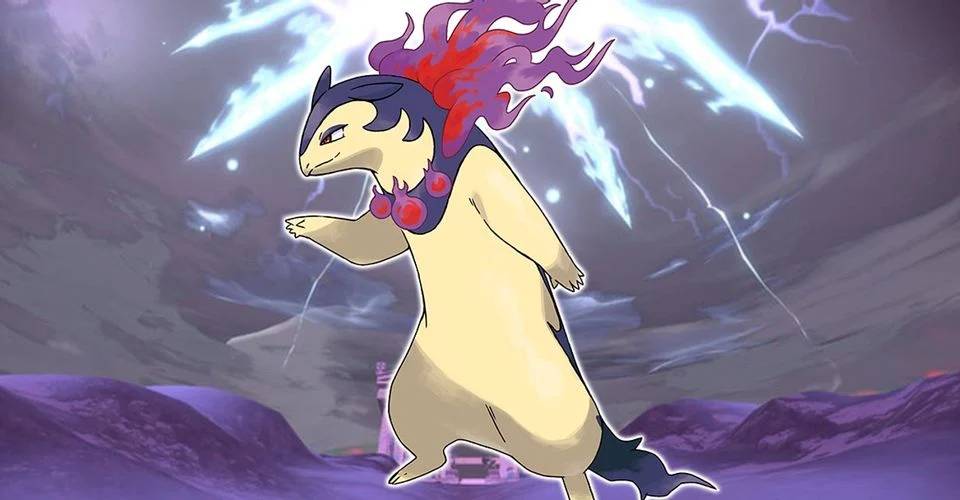 Many regional variations can be found in the Hisui area of Pokémon Legends: Arceus, including Hisuian Typhlosion. While early reveals of Legends: Arceus’ starters – Oshawott, Cynaquil, and Rowlet – sparked speculation that their final evolutions would take on new forms, this information was only verified shortly before the game’s release. Since then, the Hisuian variants of Typhlosion, Samurott, and Decidueye have received a wide spectrum of reactions, from adulation to derision. While there isn’t much in-game explanation for why these Hisuian regional varieties exist, there is an intriguing lore explanation for why Hisuian Typhlosion differs from its Johto version.

Fans reacted negatively to the initial disclosure of Hisuian Typhlosion after leaks revealed the final starter evolutions just days before the game’s release. Fans criticised the Pokémon Legends: Arceus leaks because Hisuian Typhlosion appeared to be overly grumpy or generic. However, after the pinkish-purple flames of the version were shown, many fans began to appreciate its look.

Thankfully, despite fears that the designs were a little too crazy and unneeded, many of the Hisuian forms present in Pokémon Legends: Arceus seem fine. Even still, early leaks of Hisuian designs alarmed fans before of the game’s debut. After nearly a month of exploring the Hisui area and getting used to the new Pokémon designs, Hisuian Typhlosion has proven to be a popular choice, with many trainers opting for Cyndaquil as their starter. Even if you didn’t choose Cyndaquil, you can still find it and its evolutions in Legends: Arceus’ Space-Time Distortions, including Hisuian Typhlosion. In addition, once players beat the game, Laventon will give them the two starters they didn’t pick at the start.

Legends: Arceus’ Pokédex Has A Lore Explanation For Hisuian Typhlosion 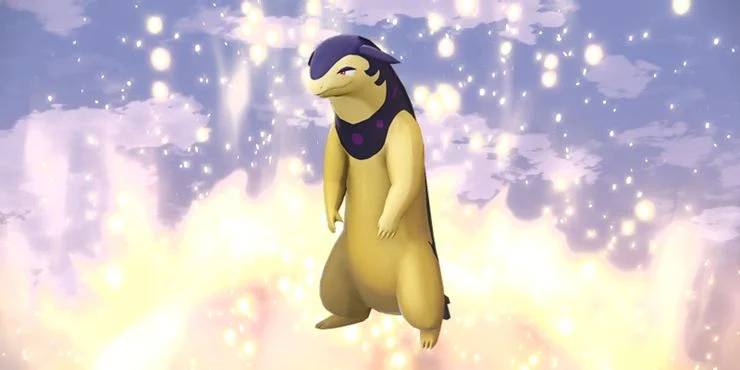 In Pokemon Legends: Arceus, Cyndaquil’s final evolution is Hisuian Typholsion. Legends: Arceus’ and other Pokémon games’ shared lore can be perplexing at times, ostensibly because Arceus retcons or changes so much of what players thought they knew about the Pokémon universe and history. Hisui varieties haven’t been seen in games set in the current day (not even as fossil Pokémon), therefore they’re thought to be extinct. It’s also unknown why some Pokémon, such as the starters in Legends: Arceus, have Hisuian evolutionary forms here but not elsewhere.
Thankfully, the Pokédex in Legends: Arceus explains why these Pokémon have Hisuian regional versions as final forms. While Hisuian Decidueye and Hisuian Samurott have intriguing entries in the Pokédex, their observations don’t reveal much. According to Hisuian Decidueye’s article, “Decidueye is protected from Hisui’s extreme cold by the air held in the rachises of its feathers. This is conclusive evidence that the environment can influence evolution.” Decidueye is said to have evolved this way as a result of the cold weather in areas like Pokémon Legends: Arceus’ Alabaster Icelands. However, it doesn’t explain why Rowlet and Dartrix have the identical appearance.

Even less is revealed in Hisuian Samurott’s Pokédex entry: “This unusual form of Samurott is a product of the Pokémon’s evolution in the Hisui area, and it has a hard heart and a deft blade. Its raging attacks slam against adversaries like never-ending smashing waves.” There’s no explanation for why a new Hisuian form exists other than the fact that it’s a result of Hisui’s evolution. While Professor Laventon claims that he imported these starters from other lands (which explains why their initial forms aren’t different), this doesn’t explain why the Hisui region hasn’t affected second evolutions like Dartrix, Dewott, and Quilava.

The truth about all three Hisuian final beginning evolutions in Pokémon Legends: Arceus, on the other hand, may be found in Hisuian Typhlosion’s Pokédex entry. This entry is written as follows: “Its flames are said to purify lost, deserted souls and guide them to the afterlife. I feel the energy of the sacred mountain that towers over Hisui has inspired its shape.” This appears to demonstrate that the Hisuian forms are a direct result of Mount Coronet’s energy. 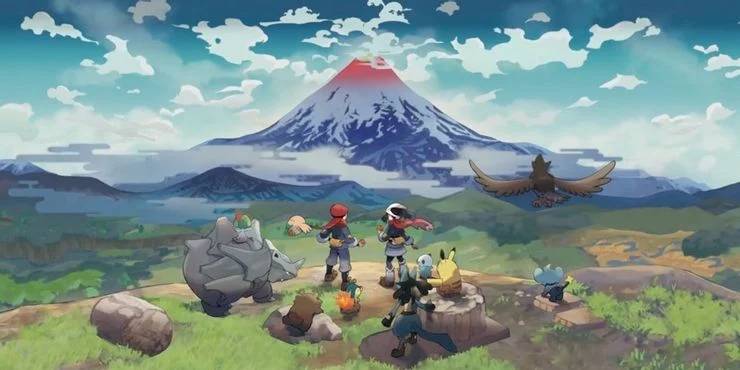 In Pokémon Legends: Arceus, Lucas, Dawn, and their Pokémon take a peek at Mt. Coronet.
It’s worth mentioning that Professor Laventon wrote the Pokédex entries in Legends: Arceus. As a result, these entries are his observations, and they may or may not be Pokémon canon. Even yet, there’s a strong chance Laventon’s observations are somewhat correct. And the hypothesis that Mount Coronet is responsible for Hisuian Typhlosion’s regional form makes a lot of sense.

Mount Coronet was a mythical place in Pokémon Diamond and Pearl that was deeply ingrained in the game’s backstory and history. The mountain was claimed to be the source of the entire Sinnoh region, and its Spear Pillar was where Arceus was said to have created Pokémon like Dialga and Palkia. Magneton’s evolution in Magnezone is likewise explained by the energy surrounding it. It’s no wonder, then, that Mount Coronet and the Coronet Highlands in Pokémon Legends: Arceus have unknown evolutionary powers as well.

The biggest unsolved question is why the Hisuian versions of Samurott, Decidueye, and Typhlosion don’t exist in modern times. Mount Coronet continues to loom large above Sinnoh. The energy surrounding the mountain during Legends: Arceus, in which the protagonist is dumped into the past, is a likely explanation for these new Hisuian forms. It’s possible that Dewott, Quilava, and Dartrix will evolve as usual once this conflict is ended. It would probably explain why there are no Hisuian forms following Legends: Arceus. These Hisuian forms were no longer feasible when Arceus’ energy dissipated from Mount Coronet.

This proposal, however, does not explain what happened to the existing Hisui forms. These Pokémon seems to have evolved in this manner long before the protagonist arrived, yet Mount Coronet could still be to blame. What happened to them is unknown, however it’s conceivable they died of extinction or evolution (because Decidueye’s Pokédex article highlights its significance). The Pokédex entries in Pokémon Legends: Arceus are nonetheless intriguing, as are the strange ties between Hisuian Typhlosion’s evolution and Mount Coronet. Pokémon legend has always been a touch confusing, but the Pokédex records in Pokémon Legends: Arceus are still interesting.