As the internet continues to make more information available to the general public, small-budget films have begun to get increased attention. Nawazuddin Siddiqui and Pankaj Tripathi’s remarkable performances are now being appreciated. Before these men surprised Bollywood, there was a Bengali actor named Rahul Bose who was making waves in the industry.

Though the actor has faded from public awareness in recent years, given how influential he was in the early years of his Bollywood career, we’d love to see him back in the theater.

These are some of the best Rahul Bose movies, proving that he is one of Hindi cinema’s most underappreciated actors:

In a film about the struggles of two sisters, one of whom suffers from schizophrenia, Rahul made an impression. In this National Award-winning film, Bose was not the main character. His portrayal was distinguished by the sense of pity he instilled in the audience.

In that other National Award-winning Bengali film, he was featured with his spot-on portrayal of a cop pursuing criminality while battling his feelings.

It’s never simple to make a character who is more engaged in the virtual world than the real one come to life. His portrayal of a man who fell in love with a woman he met on the internet affected us. Even though they used to meet on a daily basis, they had no idea what they looked like. With a devastating finale that devastated the spectators’ hearts and changed their perspectives on love.

In this Bengali film about relationship problems, Bose delivered yet another memorable performance.

Bose was fantastic in a mediocre picture. The film received some critical acclaim largely due to his performance. A young Indian man is torn between his prospective goals and his commitment to his ancestry. This is one of the best film performances by any performer in Indian cinema history.

In this cult classic from the 1990s, Bose delivers one of his best performances. Another performer who could have taken his place is tough to imagine.
It takes place in modern-day Mumbai and follows the adventures of three young people (or Bombay). Despite the fact that the lads are all of Indian heritage, they all live in the United States. In this classic East meets West tale, the Bombay lads must fight for what they want in a country where their customs are alien.

Rahul Bose gave audiences someone to identify with in a film about the life of a sex worker.
Chameli is a film that is unquestionably one of the most underrated popular star-driven pictures in recent memory. The brilliance of a simple plot about a girl who makes her living through prostitution and a guy who gets stuck with her for the night is weaved into a gorgeous tale. The acting is excellent, and the characters stay with you long after you’ve seen the movie.

In this film, Bose improved even more as a virtually unknown performer who had to measure up to the expectations of a masterpiece dealing with a subject so unfamiliar to Indian audiences.
This film inspired a new generation of Bollywood films and is still considered a classic in Indian cinema.

August is a key film for the current generation of cool youngsters, often known as Gen Z, because it portrays government and Indian Gen X in an amusing and scathing manner.

Despite the fact that he only had a little role in the film, he performed an excellent job. Lady Gaga, who is known for her elaborate wigs and haircuts, would be embarrassed by her new look.

The plot revolves around a small group of rich Mumbaikars who meet at a hair salon. Mumbai is seen in all of its grandeur in this film. Rahul stood out in the midst of multiple plotlines and piqued our interest.

The National Award-winning picture was about a lot of things, but one of them was making us care about a completely abstract individual who is still suffering with his father’s problems.
The multi-award-winning film tells the plot in a non-linear fashion, with two timelines running concurrently. Sameera Reddy is Rahul Bose’s wife, with whom he had an extramarital affair. Sameera fantasizes about fleeing her oppressive domestic life, while Rahul seeks to contact his long-lost father (Mithun Chakraborty). You should see this movie if you haven’t already.

In a Bollywood business that shies away from delicate themes like rioting, Rahul Bose offered a one-of-a-kind portrayal.
The story follows Konkona Sen Sharma (as Meenakshi Iyer) and Rahul Bose (as Raja Chowdhury, a Bengali Muslim photojournalist who focuses on wildlife) on a harrowing bus ride set against the backdrop of India’s ethnic turmoil. Mr. and Mrs. Iyer is a masterpiece that should not be missed, and it appears that it may be watched again and again since it beautifully depicts human feelings in curfews.

Rom-Coms have always been a lot of fun to watch and enjoy. Because of the past visual appeal of audiences from other films in the genre, no matter how ordinary a picture in that genre appears, it’s very difficult to pull off.

Bose has once again proved how outstanding performance can add to the enjoyment of an enjoyable movie. Almost every ‘great’ actor loses his or her magnetism when transitioning to blockbuster films. In this hit picture, Rahul Bose performed a great job, blending his outstanding acting abilities with a far larger general appeal of an entertainer. 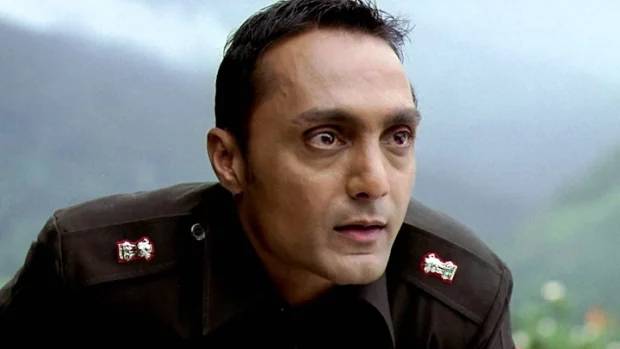 Rahul Bose plays an army officer with swagger and class in this flick. Shaurya, a remake of the Hollywood classic A Few Good Men, succeeds in keeping the core of the original while adding an Indian flavor. Even when the odds appeared to be stacked against him, Rahul Bose was able to make us sympathize with his situation. This cult masterpiece is a must-see for any cinephile.

The video concentrates on water issues in Mumbai slums and pedophilia, but it also looks at covert sensuality in modern India and how ethics is tested when sex and poverty collide.

The plot revolves around a young Bengali schoolteacher who works with pupils from rural areas. Rahul portrays the character. Despite never seeing her, he marries his Japanese pen friend over writings and remains dedicated to her throughout his life. This film is a classic about forbidden love for someone you’ve never met.