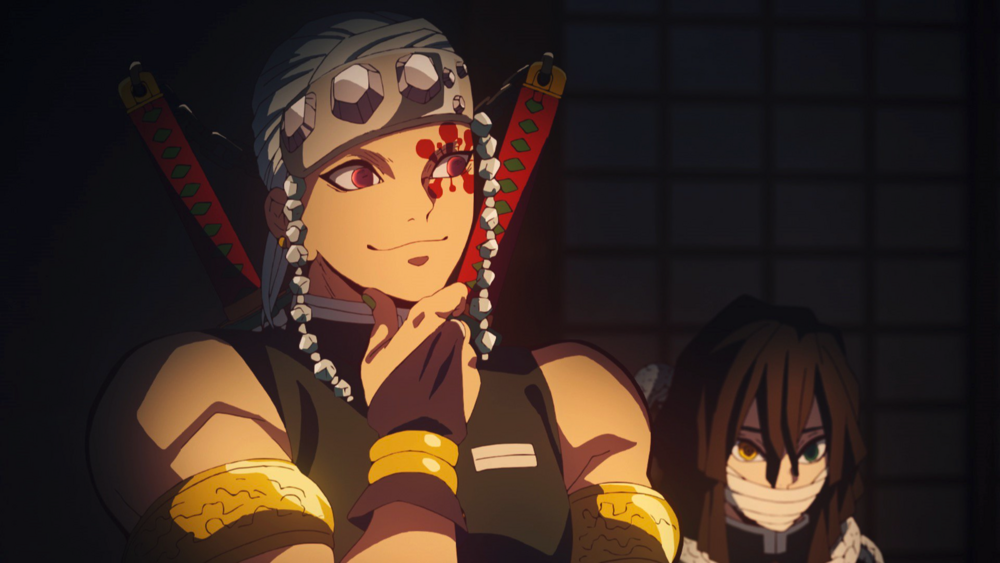 One of the most powerful characters in the Demon Slayer series is the Hashira. They have fascinating backstories, unique personalities, and amazing symbolism to go along with them. Tengen Uzui, one of the Hashira who served as the Sound Hashira during the primary plot of Demon Slayer, will be the subject of this page. We will tell you and explain everything you need to know about Tengen Uzui in this article.

The Sound Hashira in Demon Slayer: Kimetsu no Yaiba is Tengen Uzui. One of the most potent Hashira in the series, he plays a significant role in the Entertainment District Arc. He is renowned for having three marriages and a highly outgoing attitude. He took part in a number of crucial clashes with demons throughout the series.

Tengen Uzui will be the only character discussed in the next sections of this essay as we provide you with all the information you require. We’ll give you some background on him, his life, and how he fits into the overall narrative. We will also respond to a number of pertinent queries about Tengen.

Who is the Sound Hashira in Demon Slayer?

The Demon Slayer Corps’ nine most potent swordsmen are known as the Hashira. They are therefore the most elite and well-organized warriors, and everyone of them is crucial to their campaign against Muzan Kibutsuji. There are currently nine Hashira, each of which stands for a distinctive Breathing Style that they have adapted to and developed. As for the Sound Hashira, Tengen Uzui is the sole currently recognised Sound Hashira and the creator of the Sound Breathing Style.

Who is Tengen Uzui?

Tengen Uzui was born in a clan of shinobi, most likely during the Meiji era (ninja). Tengen had eight siblings, all of whom were shinobi, but by the time he became 15 years old, seven of them had already passed away. Because of the family’s downfall and his father’s concern, Uzuya forced the kids to train hard. Tengen and his younger brother are the only survivors.

He said that his sibling thought like him and was a carbon replica of his father. Due to Kagai Ubuyashiki’s direct influence, Tengen turned away from the life of a shinobi and, together with Suma, Makio, and Hinatsuru, who would later become his brides, became a demon hunter. Later, he evolved into the Pillar of Sound. 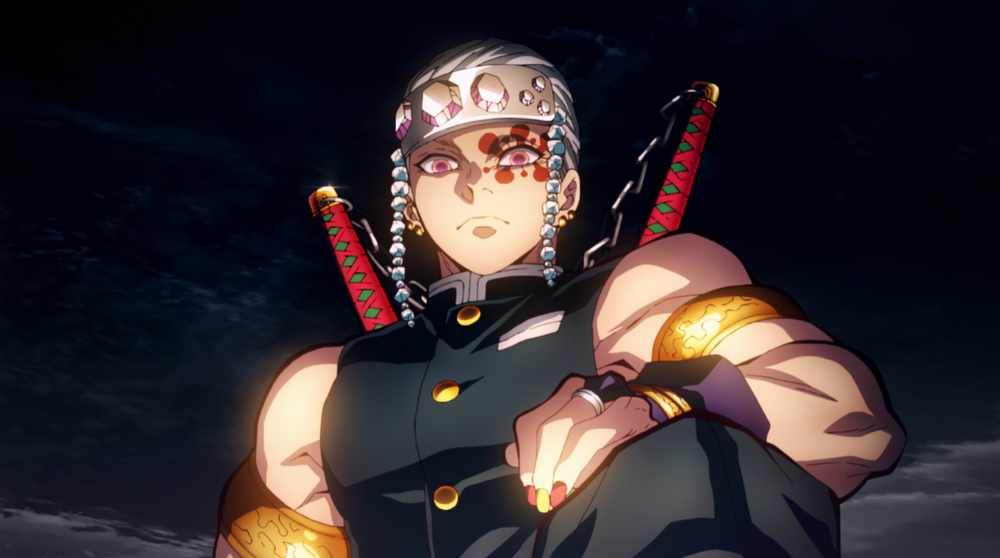 Uzui Tengen departed the ranks of the demon hunters following the arc in the red light district. He yet participated in “pillar training” as one of the coaches despite this. Later, he and the former pillar of flame Shinjuro Rengoku shielded Kiriya, the new leader of the Ubuyashiki clan, and his sisters Kuina and Kanata from Muzan Kibutsuji.

Tengen occasionally appears in front of us as a rude figure. He is self-assured and aware of all his strengths. Despite this, he has a kind heart and takes accountability for his deeds. He displays a steadfast dedication to the demon hunters’ code while defending the populace during the war with Upper Moon Six, even if it made him less effective in combat. Tengen has three spouses, all of whom he loves with love and affection and who he really values. Tengen is a “women’ man,” as he put it himself. likes everything flashy, including murders and explosions. often critical of oneself.

Why does Tengen Uzui have three wives?

You might be asking why Tengen Uzui had three wives in the first place if you’ve read the manga or watched the most current anime episodes. The truth is that we don’t actually know the answer. The manga depicted him as having three wives, and it is even implied that they all wed Tengen at the same time (perhaps when he reached 15), although the specifics were never made known.

Tengen’s simple response—that it was because he was flamboyant—does not provide any additional information. Although it hasn’t been officially proven, there is a belief based on lines from the manga that it is an Uzui family custom (to marry three women when the male turns 15 years old).

Tengen Uzui is not dead, despite what the Entertainment District Arc’s producers intended you to think. He made it through the altercation with Gyutaro and eventually retired, living to see the very conclusion of the narrative. Thus, he is one of the individuals who survived Muzan and witnessed the dissolution of the Demon Slayer Corps as well as the vanishing of demons (particularly the Hashira).

Why did Tengen Uzui retire?

Tengen was unable to talk after the struggle against Gyutaro since Gyutaro’s poison had permeated his entire body. Nezuko Kamado intervened as he was about to die from the poison and used her Blood Power to burn it from his body, rescuing him. When Obanai came on the scene, he informed him that he was formally leaving the Demon Slayer Corps and reassured him that Tanjiro, the student he despises so much, has become powerful enough to fill the vacuum left by his departure. Tengen is then escorted by his wives as he goes away to start his retirement as the Kakushi hurry to clean up the scene. Even though he appeared in later chapters, it was only in a very little role.

How does Sound Breathing work in Demon Slayer?

Tengen Uzui’s signature breath pattern is called Sound Breathing. This breath employs a combat tactic known as “scoring,” which entails reading its opponents’ actions and breaking them down into sound by scrutinising the rhythm of their movements. As a result, by striking in a way that interrupts the beat of a song, he is able to use their openings to much greater effect. Additionally, he employs tiny yet potent Demon Bombs created with unique gunpowder, capable of briefly subduing an Upper Moon.

There are five different varieties of Sound Breathing, and the manga has revealed three of them:

First Form: Roar Uzui raises his twin swords above his head and slashes them down violently while at the same time detonating bombs to cause an explosion that sounds like roaring thunder.
Constant Resounding Slashes are the fourth form.
Uzui uses a combination of attack and defence in this move by holding his swords to the side and spinning them quickly alongside his bombs.
Performing with strings in fifth form
Uzui twists the chain connecting the two of his swords while holding the one with the inverted hilt. He accompanies this by dropping a lot of explosives for them to explode. This method was successful in taking down an Upper Moon.

How strong is Tengen Uzui?

Tengen is a Hashira of the Demon Slayer Corps and an extremely powerful and able combatant. He has performed amazing physical feats of strength and quickness. He is the quickest runner among all Hashira and the second-strengthest Hashira of the current generation. He was able to match the expertise of Daki and Gyutaro, two powerful demons who had previously engaged and slain several Hashira.

Daki was no upper-tier demon to Tengen, who was likewise able to decapitate her with ease and without her noticing. Despite being poisoned with a poison that would normally quickly kill a person, he managed to repel the combined attacks of Gyutaro and Daki and even managed to defend bystanders in the process.

Tengen also used explosives with remarkable skill and accuracy, causing the least amount of damage to those around him and the most amount of damage to his adversaries. Tengen’s shinobi training has given him better tactical skills and keener senses, particularly his sense of hearing, which greatly aided him during the combat.

Tengen is one of the most formidable and accomplished swordsmen in the entire organisation, serving as the Hashira of the Demon Slayer Corps. Tengen opts to use a dual-sword fighting technique with his Nichirin Cleavers, which is uncommon among Demon Slayers. Tengen displays his exceptional and one-of-a-kind swordsmanship abilities in the battle with Gyutaro.

Despite the superior having more than a century of combat expertise, he is able to adapt to his “mantis-like” fighting technique and outlast the superior for a considerable amount of time. Tengen is considerably more lethal due to the excellent synergy between his anti-demon bombs and his sword handling abilities.

Additionally, he demonstrated how to swing his Nichirin Cleavers with just one arm. Tengen was shown how to spin his blades on the chain in addition to the usual slashes and swings. He can immediately attack in response while blocking blows thanks to the whirling action of the blades.

Without a doubt! Tengen Uzui is one of the toughest Hashira in the series and one of the strongest characters in the entire franchise. In fact, even after Tanjiro was able to defeat Muzan, we think Tengen is one of the few Hashira that he hasn’t yet surpassed. Tenegen possesses high physical strength and superb swordsmanship skills. Additionally potent enough to kill an Upper Moon is his breathing style.

What type of sword does Tengen Uzui use?

Tengen has a flashy collection of weapons to match his flamboyant attitude. He employs two enormous amber Nichirin blades that strikingly resemble nunchakus as his primary weapons. Both blade has a notch in the sharp edges, and they are each connected at the hilt by a metal chain. 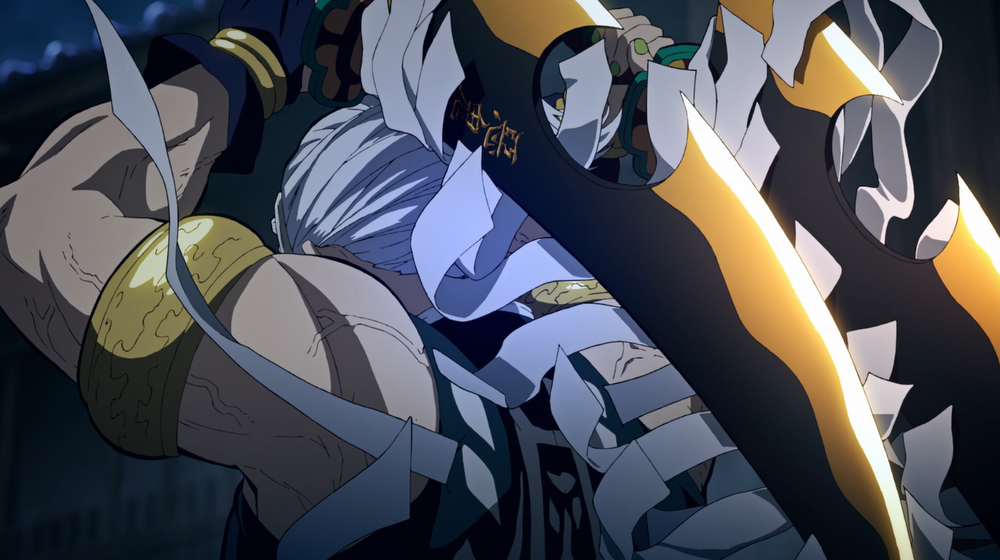 It is stated that until Tengen’s battle with Upper Rank 6, no one had ever survived a blow from one of his swords, which possessed immense explosive strength. His hilt is spherical, golden in hue, has four little indentations, and has a maroon ring in the centre with a green border. His blades have the inscription “Destroyer of Demons.” Tengen does not use a sheath and instead carries his massive sword wrapped in linen on his back.

Tengen Uzui is the pen name of Katsuyuki Konishi. On April 21, 1973, in Wakayama, Wakayama Prefecture, Katsuyuki Konishi was born. Seiy, a voice actor from Japan, is him. He performs with Tomokazu Seki’s performing group Herohero Q Company and is a member of the agency Ken Productions. His most well-known roles include Kamina from Tengen and Kyshir Mibu from Samurai Deeper Kyo. Toppa Gurren-Lagann, Amidamaru from Shaman King, Haji from Blood+ and Ren Tsuruga from Skip Beat!.