The authors are either time travellers or Nostradamus’ kin. In its 33rd season, which will premiere in 2022, the animated comedy The Simpsons never fails to thrill audiences with ominous prophecies that come true years later.

There are many characters in the Simpsons family, but Dan Castellaneta’s Homer, Julie Kavner’s Marge, Yeardley Smith’s Lisa, Nancy Cartwright’s Bart, and Maggie’s voices are the prominent ones. The Simpsons family interacts with other Springfield residents in each episode, including guest stars who have appeared in previous seasons of The Simpsons. However, what fascinates viewers is how The Simpsons writers foresaw some events at least five years in advance. Is the world simply acting out The Simpsons’ plot, or does it actually foretell current events? 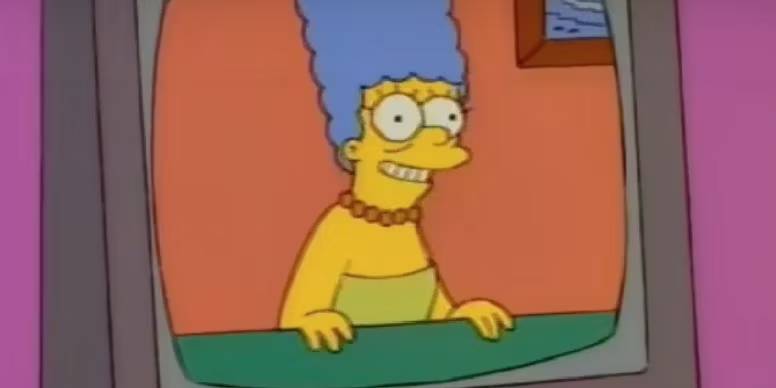 In the 1995 television episode “Lisa’s Wedding,” Lisa saw a fortune-teller who foretold her future for the year 2010. Lisa planned to wed her college sweetheart in the future. She called her mother to tell her about the good news. The phone Lisa used had a rotary dial and a screen that displayed Marge’s face in real time.

Despite being created in 2003, Skype was largely utilised as a calling service on computers. The “FaceTime” programme, which Apple claimed it had created for Apple customers in 2010, allowed users to see the person they were speaking to while on the phone by using the phone’s camera.

Lady Gaga and The Superbowl 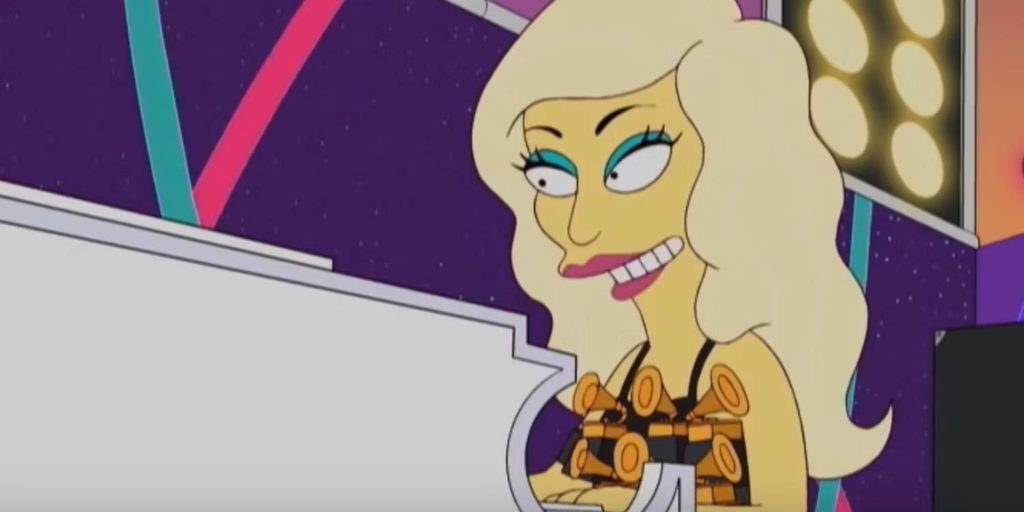 A musical artist’s performance was predicted in one of The Simpsons’ Super Bowl episodes. Lady Gaga visits Springfield in the 2012 episode “Lisa Goes Gaga” (season 23, episode 22), when she performs her songs while hovering over an audience and even plays the piano at one point.

In 2017, Lady Gaga performed her greatest songs, including “Poker Face” and “Bad Romance,” at the Super Bowl LI Halftime Show. Gaga performed at the halftime act while being hoisted above the crowd. She also performed “Million Reasons” on the piano later in the performance. 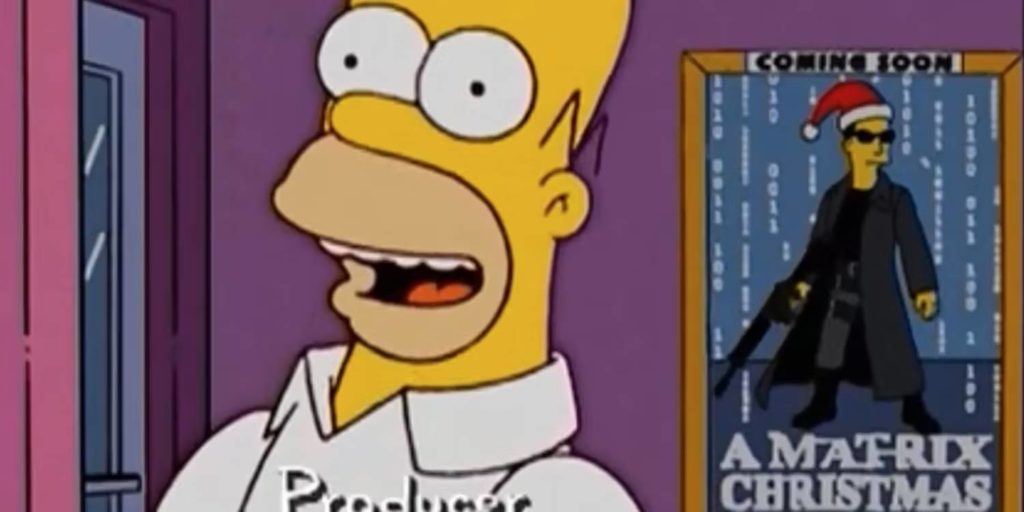 Image from 20th Century Fox of Dan Castellaneta’s Homer Simpson holding the movie poster while inside a theatre
In the 2004 episode “The Ziff Who Came To Dinner,” which was part of season 15, episode 14, this Simpson forecast was simple to miss. A Matrix Christmas is advertised on a movie poster that appears behind Homer Simpson at the start of the episode. The picture showed Neo, who is portrayed by Keanu Reeves, wearing a holiday hat.

While The Matrix Reloaded and The Matrix Revolutions were released in 2003, The Matrix was first released in 1999. The following The Matrix franchise dystopia movie wouldn’t be out until 2021. On December 22, 2021, The Matrix Resurrections was made available in the US. Although Neo was prominently displayed on the poster, he was, regrettably, not donning a Christmas hat. 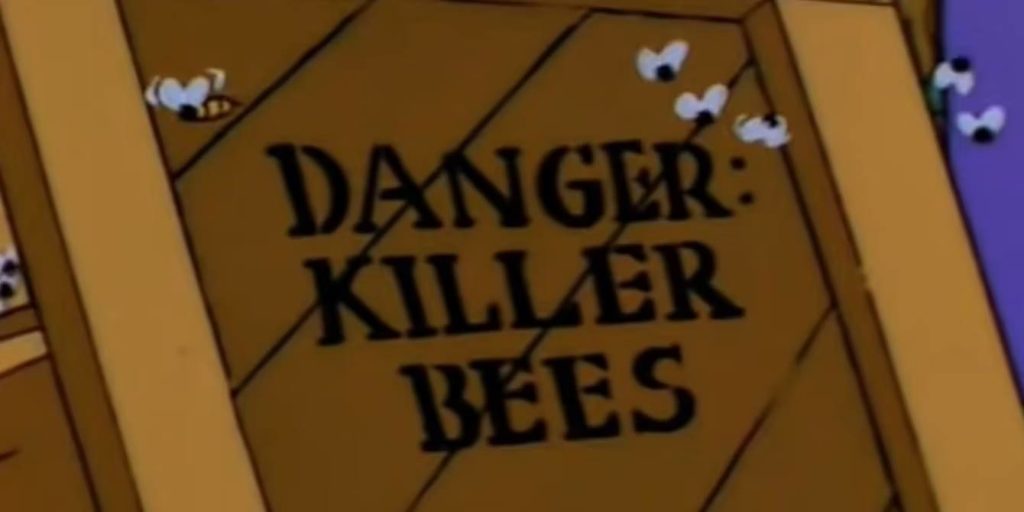 The Simpsons hinted at a second epidemic in the same episode where they prophesied a pandemic. A multitude of people demanded a placebo to alleviate their condition during the episode “Marge in Chains.” The throng overturned the truck after someone in the crowd pointed at one that could contain the placebos, unleashing a swarm of “killing bees.” 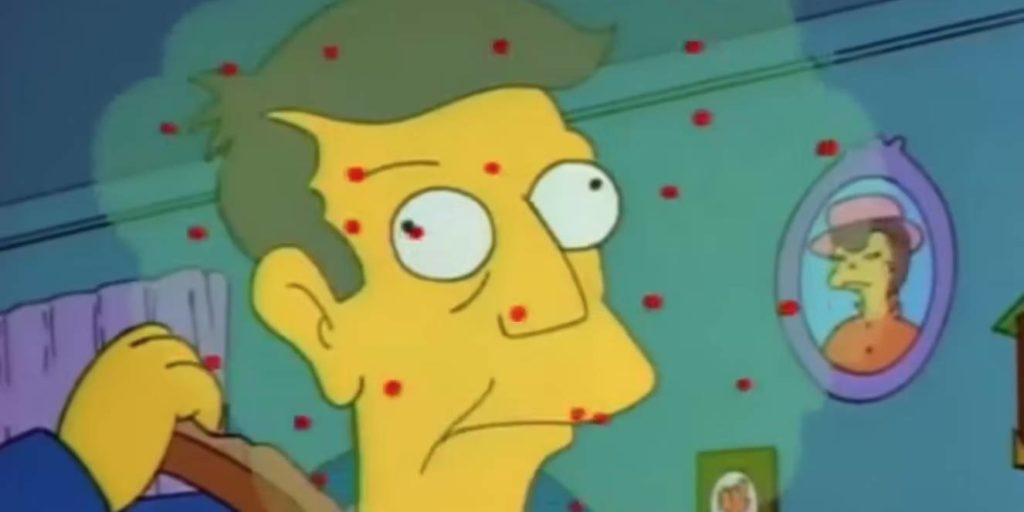 The Simpsons’ “Marge in Chains” from season 4, episode 21, made its debut in 1993. The main character of the episode was Marge (voiced by Kavner), who was sentenced to prison after being accused of theft. After a cargo of goods arrived in Springfield, the Osaka Flu spread across the remainder of the city.

A pandemic akin to the COVID-19 pandemic was brought on by the Osaka Flu. Before arriving in the United States, the Osaka Flu was first discovered in another nation. Additionally, the episode’s doctor advised bed rest for the patients because there wasn’t a cure for the condition right now, just as researchers were still experimenting with a COVID-19 viral vaccine.

Tom Hanks Endorses the US 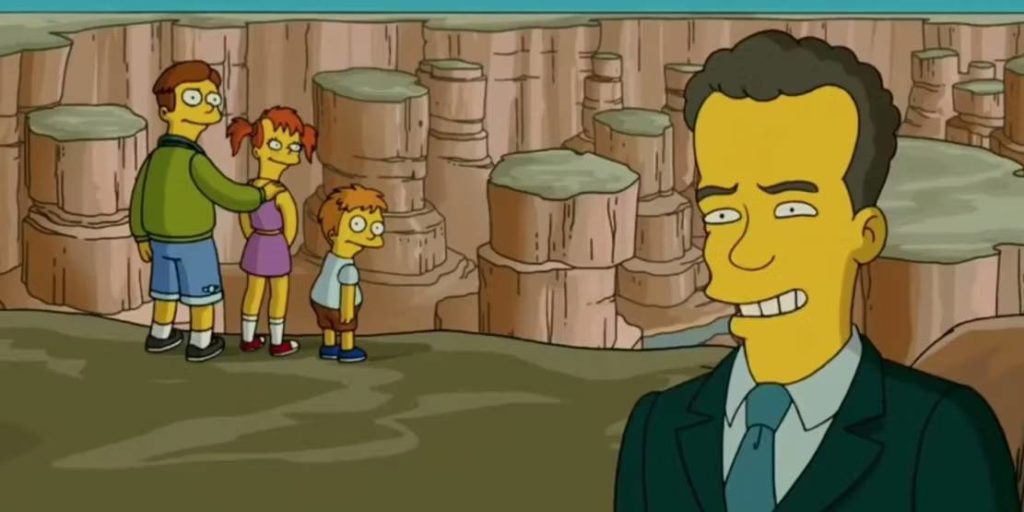 Tom Hanks had a brief cameo appearance in The Simpsons Movie (2007) during a commercial sequence that the Simpsons were viewing. A father took his two kids to view the Grand Canyon during the commercial, but the parent’s daughter was dissatisfied and asked for a new Grand Canyon. The US government “lost its credibility, so it’s borrowing some of mine,” says Hanks as he then enters the scene.

Hanks made an appearance in the commercial in 2022, one year after President Joe Biden took office, to express the American people’s tenacity in the face of the COVID19 Pandemic’s economic troubles. The video highlighted the accomplishments of Biden’s administration thus far while focusing on the American theme of rebuilding its economy. 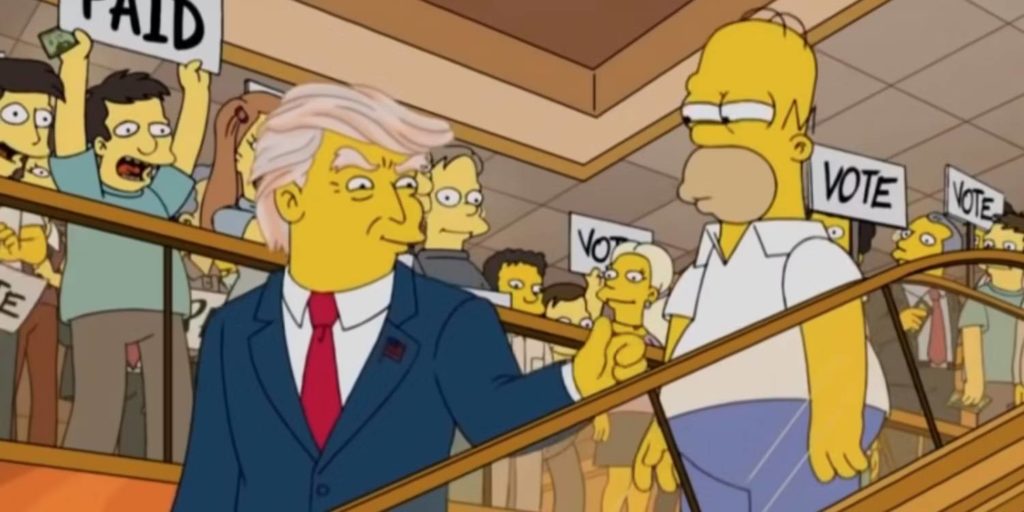 Donald Trump with Homer Simpson from “The Simpsons” (voiced by Dan Castellaneta) Image courtesy of 20th Century Fox
In the season 11 episode 17 titled “Bart to the Future,” which debuted in 2000, Bart Simpson predicted the future for himself and his sister. After Donald Trump’s presidency, the United States was given the responsibility of restoring the economy, according to Lisa Simpson, the country’s leader.

In addition to Trump being elected president in 2016, one television scene appeared to be practically an exact duplicate of actual life. A large group of people observed Donald Trump descending an escalator in the same episode. In actuality, a gathering of supporters watched as President Trump and First Lady Melania Trump ascended the escalator. 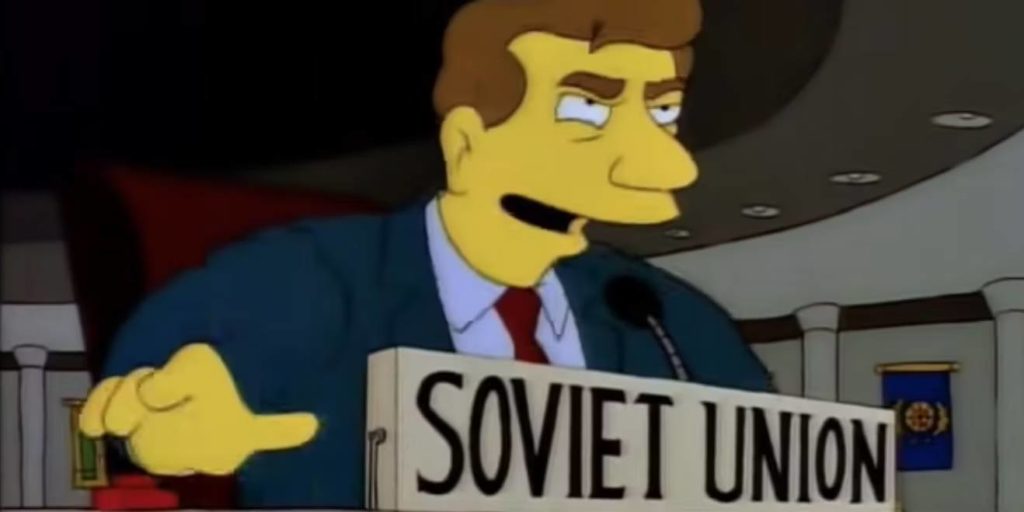 Season 9, episode 19 of the show, “The Simpson Tide,” debuted in 1998. In the episode, representatives from every nation convened at the UN meeting and discussed their own strategies. According to the Russian delegate, they wanted the other nations to believe that the Soviet Union was a thing of the past. The Soviet Union flag was then displayed, followed by images of soldiers forming up.

The most recent prediction to come true in 2022 is thought to be this terrible one. Crimea had been taken over by Russia in 2014. Russia invaded Ukraine in February 2022 and carried out airstrikes against Ukrainian residents. The Simpsons showrunner noted that this prediction differs from some of the show’s more “trivial” predictions because it is based on the persistent conflicts that have existed throughout history. 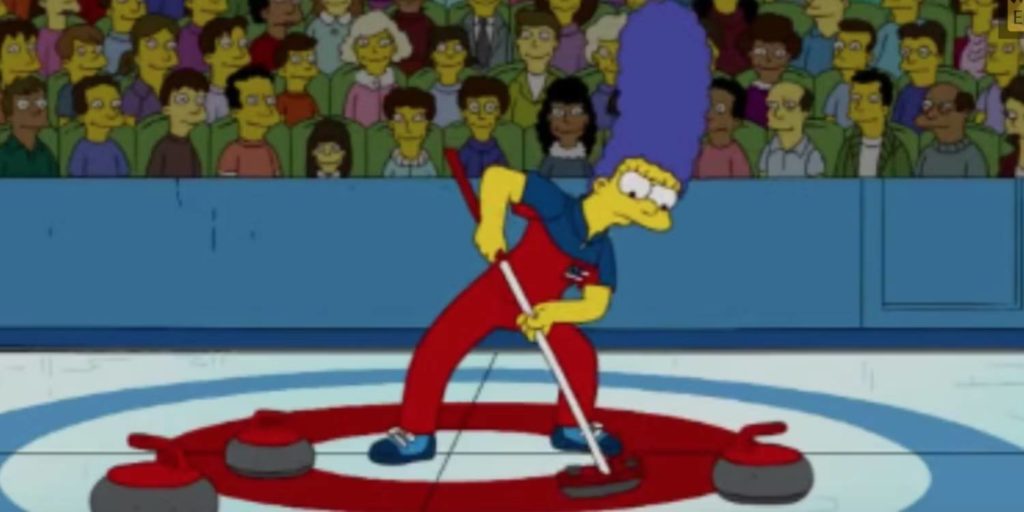 The Simpsons’ Marge Simpson, portrayed by Julie Kavner, participating in curling at the Olympics
When Homer and Marge arrived at the skating rink in the season 21 premiere of “Boy Meets Curl,” they discovered that curling practise had been banned. They gave curling a shot and eventually joined the American Mixed Doubles Curling Team for the Winter Olympics. The American team trounced Sweden and took home a gold medal during the episode.

Josh Shuster served as the team’s captain as they won their first curling gold medal in 2018. The American team defeated Sweden 10–7 in the 2018 Olympic competition. 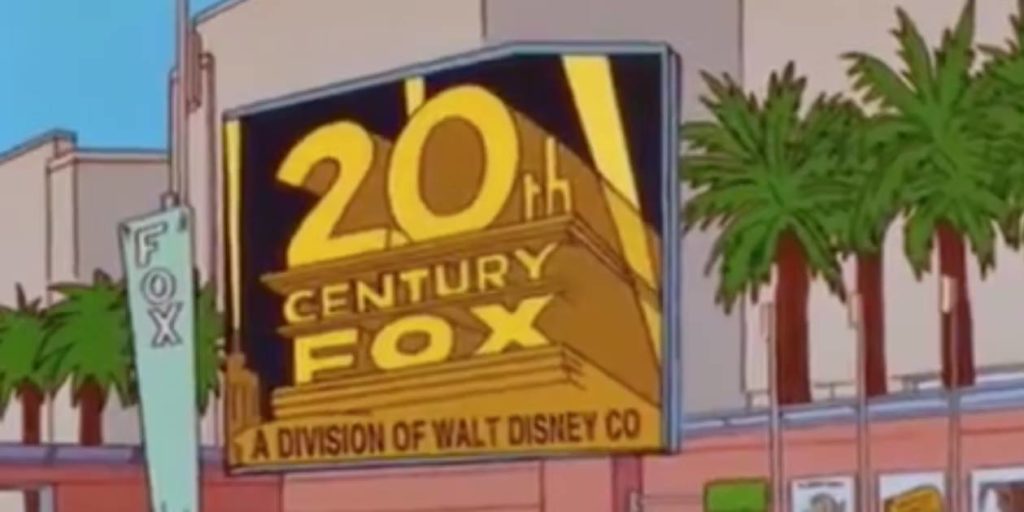 Homer met Alec Baldwin (voiced by Baldwin) and Kim Basinger (voiced by Basinger) in the 1998 episode “When You Wish Upon a Star” (season 10, episode 5) and agreed to work for them. Homer called 20th Century Fox officials and pitched an idea for a movie. The following scene in the programme revealed that Walt Disney now owns 20th Century Fox.

A $71 billion merger between Walt Disney and 21st Century Fox was announced in March 2019. Disney and Fox reached an agreement on the streaming rights for the movies that Disney will control in 2021. In other words, this established the agreement’s date as well as the movies that would be exclusively available on Hulu, Disney+, or HBO Max.