Whether you’ve seen The Sopranos a few times or are just getting into the legendary HBO series, you’ve almost certainly been hit by all the brands in your face from the first episode on. Isn’t Meadow Soprano (Jamie-Lynn Sigler) a big fan of Snapple?

Tony Soprano (James Gandolfini) and his preferences for soft drinks (Diet Coke), autos (various General Motors SUVs), and sunglasses are no exception (Armani). Tony sounds like he could work in a Nissan store after he obtains an Xterra for his son A.J. (Robert Iler).

TV critics and fans alike have pondered these apparent product placements over the years. On the May 25 episode of his Talking Sopranos podcast, Steve Schirripa, who played Bobby Baccala, brought it up.

“Obviously product placement,” Schirripa told co-host Michael Imperioli about episode 9 of season 1 (“Boca”). “It’s very obvious to me.” While many viewers might agree, it turns out it wasn’t so cut-and-dried for HBO and The Sopranos writers. 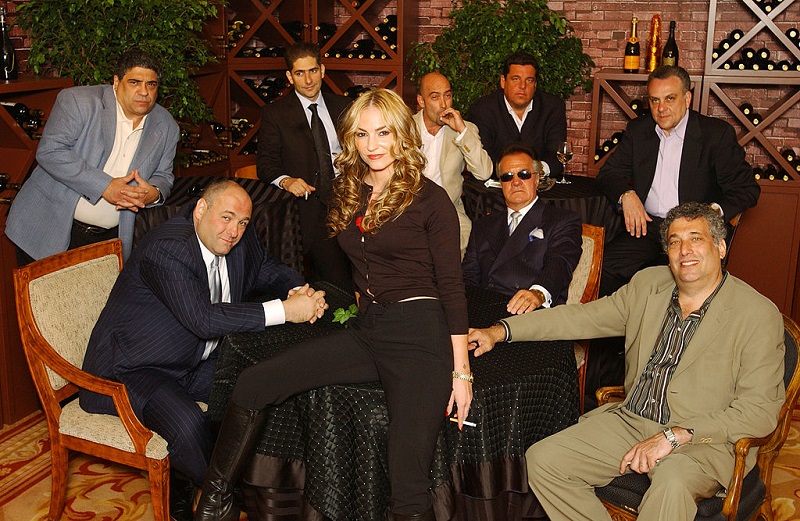 “The Sopranos” at The Golden Nugget on June 12, 2004 in Las Vegas, Nevada | Denise Truscello/WireImage

During the first run of The Sopranos, the product placement issue drew the attention of many bloggers. Jon Fine highlighted to some of the more overt examples in a 2004 AdAge article. Tony’s Xterra was near the top of the list.

Tony puts in some great promotional language after giving over the keys, mentioning “sensors in the seat belts” and “Nissan’s triple-safety concept.” The salesy patter was obnoxious — even distracting — to executives from rival entertainment firms on such a high-profile show.

HBO, on the other hand, is said to have never taken money from Nissan, Coca-Cola, or any other company to feature their products on the show. (One Sopranos producer told AdAge that if she tried that, she’d get fired.) That isn’t to suggest that HBO and Sopranos producers didn’t save money by showcasing products.

HBO and producers received loans or gifts of luxury things (Tony’s Cadillac Escalade, another character’s Maserati) even though they weren’t paid for the placements. There were also discussions, according to certain automaker executives, concerning how their vehicles might be used.

‘Sopranos’ characters talked about brands naturally in many cases

While some executives may consider Tony’s Xterra proposal to be over-the-top, others may claim that it came naturally to the character. Tony clearly has a way with words when he wants to persuade someone, and he made his point about safety and his son’s new SUV. Besides, he might learn a lot about such things by watching football commercials.

Tony also appreciates his high-tech home entertainment system (equipped with popcorn maker), as well as spending time at the Plaza Hotel (a location placement) and living the consumerist lifestyle he believes he has earned. He also tries to buy off his wife Carmela (Edie Falco) at every opportunity.

That could explain why Imperioli, who wrote four Sopranos episodes, was taken aback when Schirripa mentioned “obvious” product placement. “Really?” On Talking Sopranos, Imperioli responded. “Jim [Gandolfini] used to drink — I recall him drinking a can of Coke to wake up immediately before a scene.”

Schirripa stated that he could be mistaken, and that he would consume certain beverages on Blue Bloods even if there was no product placement. It was indeed a little complex on The Sopranos. In certain ways, both Imperioli and Schirripa were correct.