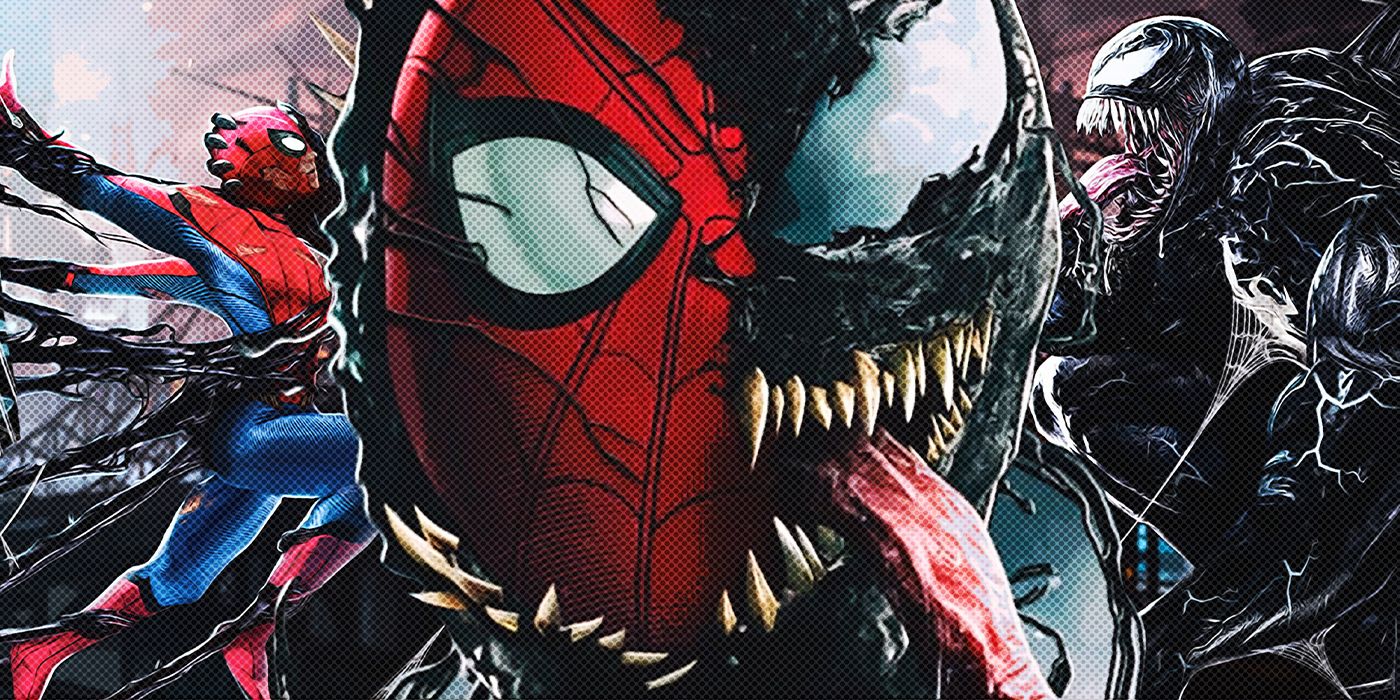 The Marvel Cinematic Universe is filling up faster and faster! The MCU has recently looked at the connections between the various comic book characters that are in Spider-orbit. Man’s With the return of Tobey Maguire and Andrew Garfield in their respective roles as everyone’s friendly neighbourhood Spider-Man, Spider-Man: No Way Home gave us a hearty dose of Spidey. There were also a tonne of antagonists from the Spider-Man universes of Tom Holland, Tobey Maguire, and Andrew Garfield, including Doc Ock (Alfred Molina), the Green Goblin (Willem Dafoe), Electro (Jamie Foxx), Sandman (Thomas Haden Church), and the Lizard (Rhys Ifans). Wow, there are a lot of names there.

Eddie Brock was formally introduced into the MCU in the Venom sequel Venom: Let There Be Carnage’s end-credit scene, which transported Tom Hardy’s Eddie Brock into Tom Holland’s Spider-Man realm. And in case you were still on the fence about whether or not Venom and Holland’s Spidey will ever cross paths, No Way Home’s post-credits scene showed a perplexed Eddie Brock catching up with a waitress on all of Spidey’s recent mischief. Even worse, he suggests that “maybe I should go to New York to speak to this, uh, Spider-Man.” Are your spider senses tingling as well? However, Tom Hardy’s portrayal of Venom was not the first time this evil symbiote appeared on television. In Spider-Man 3, Topher Grace also portrayed Eddie Brock, a Daily Bugle employee who rapidly turns into Peter Parker’s adversary. The extraterrestrial symbiote generally known as Venom selects Eddie as its new host after separating from Peter. The genesis narrative and relationship of Venom and Spider-Man are shown here in a way that closely resembles the comic book version. In relation to comics,

It’s time to untangle the webs and examine the turbulent past of Spider-Man and Venom’s friendship. 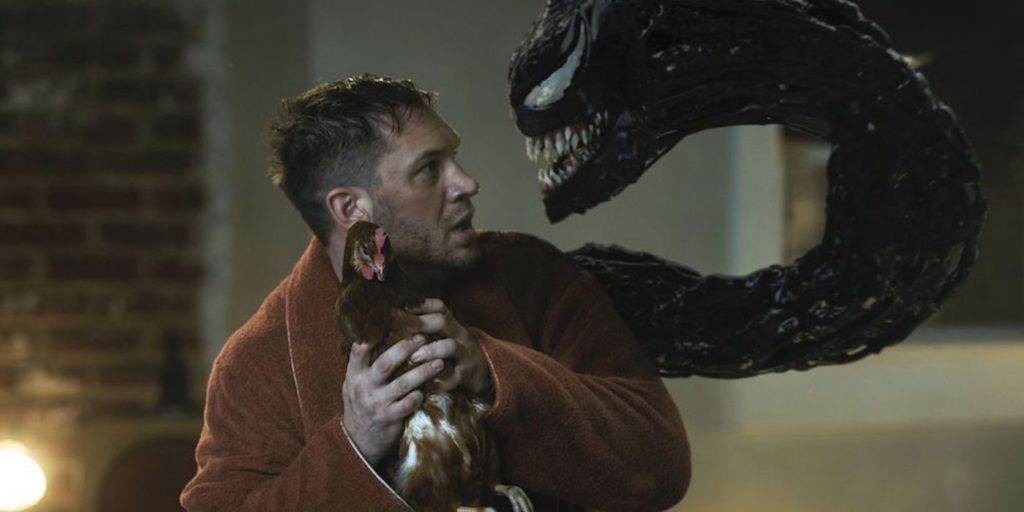 Let’s lay down some fundamentals first. In 1962’s Amazing Fantasy #15, Spider-Man made his debut. He was created by Stan Lee and Steve Ditko. It chronicles the origin tale of Peter Parker, a gifted scientist and self-described “wallflower” whose life is irrevocably changed after being bitten by a radioactive spider. He gains superhuman strength, acquires a “spidey sense” that warns him of impending hazards, can crawl all over surfaces like a spider, develops web shooter technology that allows him to fire webs and swing from surfaces, and gets superhuman strength. Additionally, he creates a very cool superhero suit for himself in addition to the web shooters. Peter uses his superhuman abilities to defend the city and the people he cares about, including Uncle Ben and Aunt May, his elderly guardians.

What exactly is this symbiote, then? In Secret Wars, a 12-issue limited event series, issue #8 introduces Spider-Man to it for the first time. (Mattel asked for the series to begin because it wanted to produce more toys.) It was this mega-crossover extravaganza that brought a long list of heroes together to battle Titania, Doctor Doom, Lizard, and Ultron on the far-off planet Battleworld, which was created by a mysterious being known as the Beyonder. These heroes included Spider-Man, Thor, She-Hulk, Cyclops, and Nightcrawler. By chance, this creature is also in charge of bringing together all of these heroes and villains in one place in order to determine who will win. Spider-Man discovers that there is a machine nearby that could construct a new suit for him using the power of his mind after one of the encounters leaves his armour fairly battered. A tiny, black ball that seems to have a will of its own emerges from the machine. To the surprise of Spider-Man, it grabs hold of him and begins to creep up his arm. 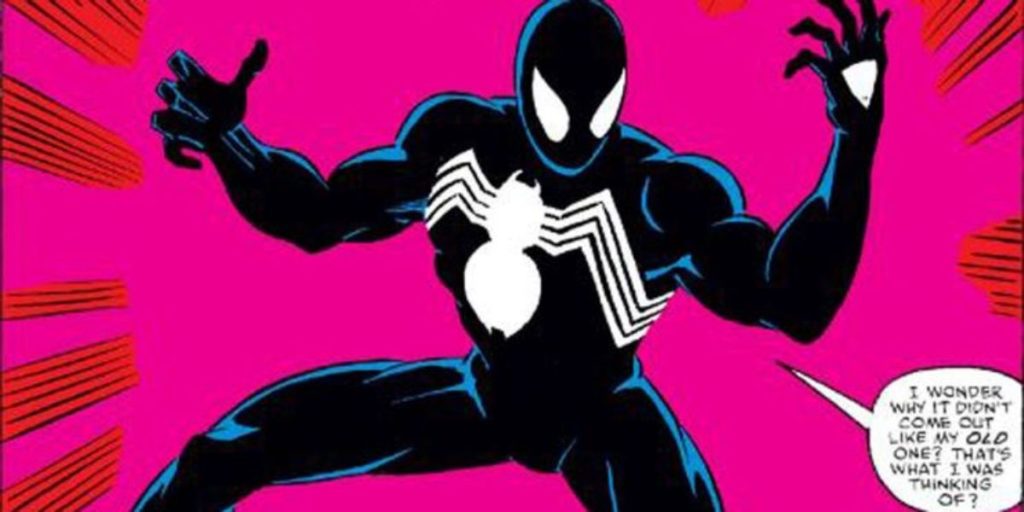 Peter was worried about the potential of this mysterious substance. He asked Reed Richards (Mister Fantastic) to carry out some studies because it was causing him to have nightmares, control him while he slept, and make him violent. We learn that the new black outfit is an extraterrestrial symbiote that is actively attempting to become one with Peter Parker in The Amazing Spider-Man #258 from November 1984. Peter is understandably shocked and tries to tear the outfit off of his body. The alien suit won’t leave, which is the only issue. The Fantastic Four understand that the symbiote is essentially allergic to loud noises, so they intentionally create a situation in which it is helpless. Reed retains the undesirable black substance for additional tests while Peter has disposed of it. Peter had no idea that this was just the start of a true nightmare.

In Web of Spider-Man #1, published a year later, the alien symbiote makes a comeback and reassociates with Spidey, who is emotionally fragile due to his breakup with the Black Cat and his tense relationship with Aunt May. He goes to Reed’s for assistance in his desperation to get rid of the costume once more. However, this annoying extraterrestrial actively prevents Peter from going there by reading his thoughts. Peter remembers the creature’s sensitivity to sound and makes his way to the church after hearing the bell of a nearby church ring. Peter is brought to the verge of death by the thunderous church bells, but it is worth it because the alien suit essentially dissolves off of him and escapes. Hey, how’s that Eddie man doing? 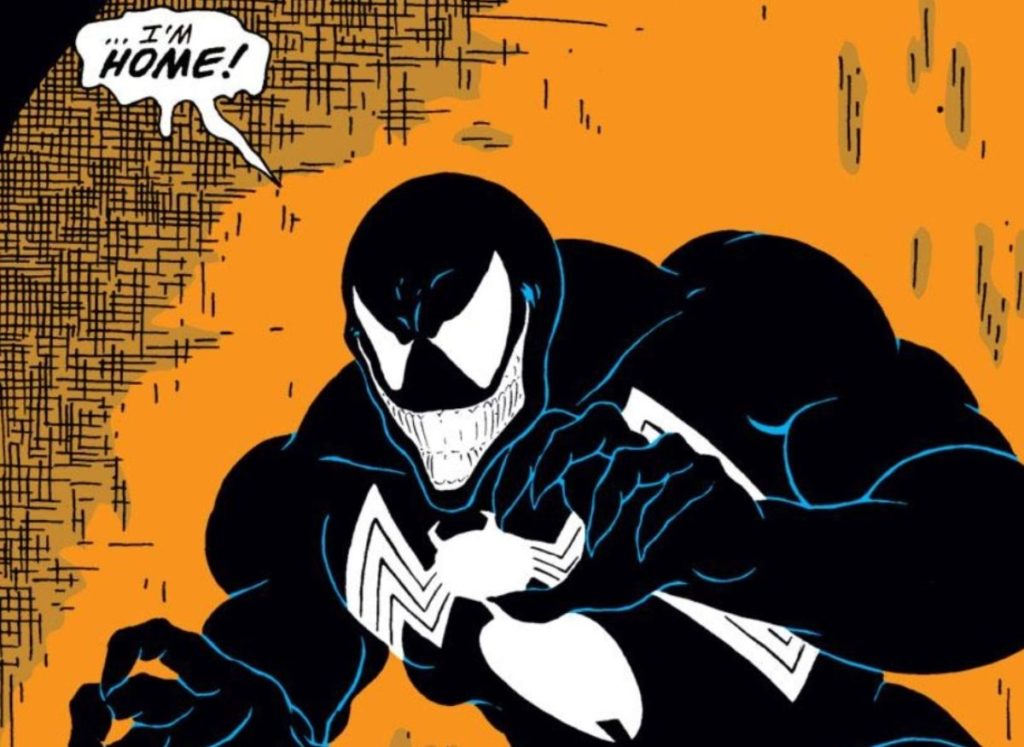 In Web of Spider-Man #18 from 1986, when his hand is shown pushing Peter onto railway tracks, Eddie technically makes his debut appearance (though he is saved). Peter questions why his Spider-senses did not warn him. It turns out that when the alien symbiote utilised him as a host, part of his powers were sapped. Eddie Brock is shown reading Spider-Man-related articles that he has taped to a wall at the end of The Amazing Spider-Man #298. The same symbiote that seized control of Peter (gasp!) invades his body, causing him to change into a beast-like creature. This massive entity hides out in Peter and Mary Jane’s flat in the ensuing issue, leaving Mary Jane gasping for air.

Finally, Venom makes his complete official debut in The Amazing Spider-Man #300. Due to Peter’s lack of Spidey sense, Eddie had been following him for a while and was able to attack him without any noticeable resistance. Eddie Brock’s face is exposed when the symbiote separates from his host. Eddie tells how Spider-Man destroyed his life and damaged his reputation as a writer. Eddie wrote a piece about Emil Gregg when he was still working at the Daily Globe that he claimed revealed Emil Gregg to be the real Sin-Eater. Emil learned that Stan Carter, the genuine Sin-Eater, had been apprehended by Spider-Man, much to his shame, and that Emil was a “compulsive confessor.” Due to his subpar reporting, Eddie was fired and treated extremely poorly by his colleagues. Eddie spent the most of his newly-found leisure time exercising and planning ways to exact revenge on Spider-Man. 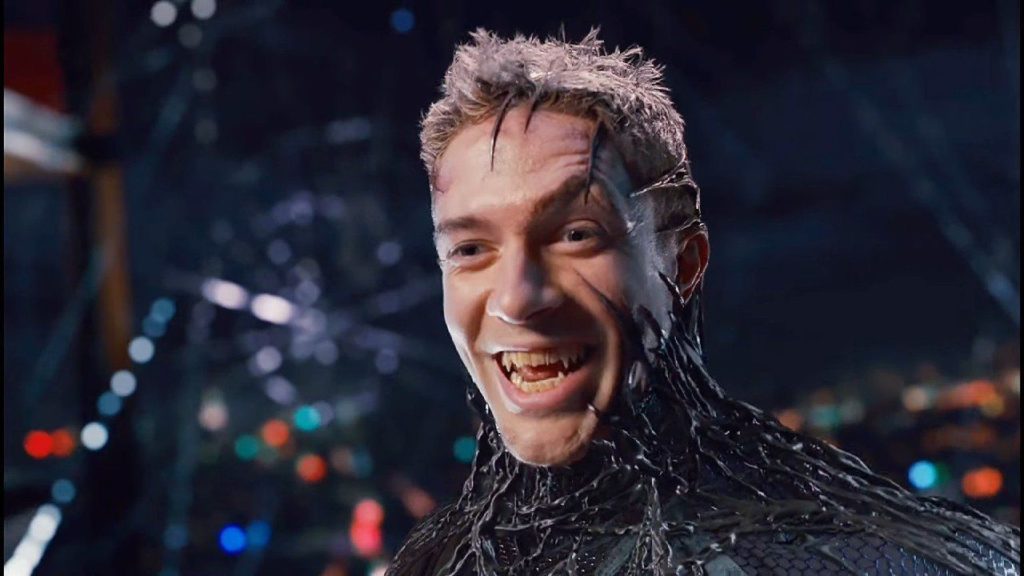 Eddie eventually became too lost to care and thought about ending his life. Eddie went to church (the same church that Peter used to free himself from the symbiote) and asked for forgiveness, consumed with remorse for ever considering such a course of action. Eddie’s wrath and desire for vengeance were sensed by the symbiote, which was still present in the church. Eddie accepted his role as the creature’s host and as a result developed powerful spider-like abilities and gathered personal information about Spider-Man and his life as Peter. Eddie and the symbiote were combined into a slimy, toothy being they like to refer to as Venom. Eddie and the alien substance become so close that they can communicate.

Venom evolved became one of Spider-toughest Man’s and most ruthless adversaries of all time, frequently putting him in danger of dying. As he struggles with his principles and sometimes fights with Spider-Man for the greater good, Venom has evolved into a kind of anti-hero. Over the years, the alien symbiote has taken a variety of characters hostage for varied amounts of time, including Mac Gargan (formerly known as the antagonist Scorpion), Peter’s high school bully Flash Thompson, Red Hulk, Ms. Marvel, and Rocket Raccoon.

What kind of anarchy will Venom introduce to the MCU?

Ty Lee In Avatar: Interesting Things You Should Already Know About Ty Lee