Hollywood’s recent realization of the importance of comedy with strong female leads is a blessing. Even as violent internet trolls sit at their computers, ready to pounce at a moment’s notice, the comedy subgenre has continually offered moviegoers amazing movies like “Bridesmaids” and “Booksmart.” Do you need us to remind you of the huge outrage to the “Ghostbusters” reboot in 2016?

Thankfully, “Girls Trip” from 2017 didn’t get much attention from those movie “fans” on the route to grossing over $100 million at the box office. The story follows Ryan Pierce (Regina Hall), who is planning a reunion trip with her three college friends. Sasha (Queen Latifah), Lisa (Jada Pinkett Smith), and Dina make up the quartet. Their wild journey begins in New Orleans where the girls’ exploits drive them to attend the Essence Music Festival. “Girls Trip” hits all the funny notes, including brilliant comic bits and a touching, satisfying conclusion. It’s understandable why the film has a 92% rating on Rotten Tomatoes. The one unexpected aspect of its theatrical run is that a sequel wasn’t instantly approved by Universal Pictures.

Fans of “Girls Trip” can cheer, though, since author Tracy Oliver announced that a sequel would be released and that every “Flossy Posse” member will return to reprise their parts.

The girls are back for Girls Trip 2 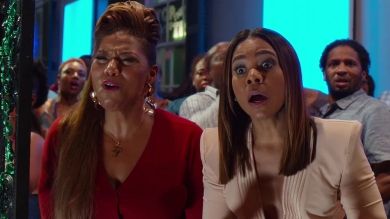 The 2023 Sundance Film Festival is already well under way, and Variety is bringing big news from the event. The “Girls Trip” author Tracy Oliver met down with the publication to promote “Harlem” Season 2, but she had other sequels on her mind as well. In the interview, Oliver publicly reaffirmed that “Girls Trip 2” is taking place.

Oliver kept on providing updates as well, dropping hints about the next sequel’s plot. She stated, “We’re looking to place it in Ghana,” adding that “Girls Trip” producer Will Packer “may kill me” for making such a big announcement. One of the “Harlem” stars, Shoniqua Shandai, exclaimed, “Afrochella!” when she realized what the African setting for “Girls Trip 2” meant. The Flossy Posse is actually traveling to Ghana to take part in the country’s wildly popular African music event, Oliver later confirmed. Since no sequel would be complete without the original cast members, she also announced that Regina Hall, Queen Latifah, Jada Pinkett Smith, and Tiffany Haddish would all be returning.

When asked about the release date for “Girls Trip 2,” Oliver responded that she is currently working on the script but that Universal is undoubtedly anticipating seeing it soon. Oliver jokingly said, “I need to quit drinking and write more.” She also said she’s still “chewing on” the “Clueless” remake she’s been working on, so if that materializes Oliver is going to have a busy schedule.