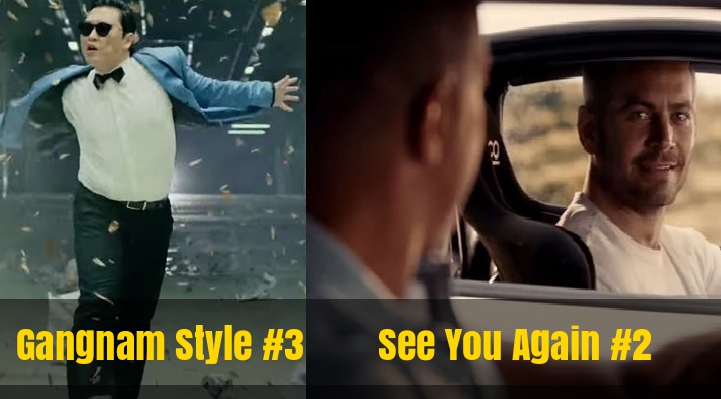 Lists come and go but this one is something we all are interested in, it’s music after all. Recently, a song very dear to all of us has become the most viewed video on YouTube and we couldn’t be happier. But, before you guess the name, let’s see which are other four songs in the list.

Mark Ronson’s collaboration with Bruno Marks works so much that back in 2014 and 2015 this one was one of the most popular song on YouTube. It stars Mars, Ronson and the Hooligans walking around a city, wearing brightly colored suits and chains and people seem to love it.

Justin Bieber has ruled the YouTube chart list even before youtube became an addiction. His track Baby has topped the list for years before Gangnam style came along. And now, his song Sorry is rising the charts. Can it become No.1 in near future, only his fans can decide.

Park Jae-sang, known professionally as Psy, was already a huge hit in South Korea, but with Gangnam Style, he turned into an international sensation. The marketing tactics used the promoters worked so well that only Gangnam style became No.1 within only a few months.

The Track dedicated to Paul Walker after his demise has emotionally drained millions of viewers. The Fate of the Furious featured this song along with emotional footage from the whole series. Along with the most viewed video on Youtube, the song is also the most Liked Video on YouTube (from the above-mentioned list.)

Currently, everyone’s favorite and second Non-English song in the list. Despacito is a must-play in every club. With the speed people are watching this video, it is highly likely that in a few months it might top the chart and become the most viewed video on Youtube.

So what are you waiting for, go ahead and give it another listen?

We’ll be following up on these videos every week to see if anything changes and keep you updated. See you Again!!