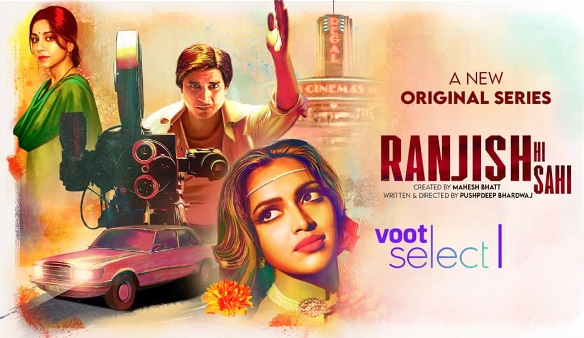 Ranjish Hi Sahi is an Indian web series that will debut on Voot Select on January 13th, 2022. In addition, the emotional-drama-thriller is directed by Mahesh Bhatt. Pushpdeep Bhardwaj is also the creator and director of the ott online series. It also has Tahir Raj Bhasin, Amrita Puri, and Amala Paul in major roles. Surprisingly, the trailer for Ranjish Hi Sahi claims that the show is based on true events. As a result, it appears to depict a romance between Mahesh Bhatt and veteran actress Parveen Babi. Finally, it is available in both Hindi and English.

The story is set in 1970s Bollywood and follows Shankar, a young and struggling director (Tahir). He is married and has children with Anju (Amrita). Anju tells him that he would be able to focus on his business while she manages the house. As a result, he pursues his passion of making a film based on a unique story. Soon after, he was on the lookout for the cast of his film. He meets Amna, a lovely woman (Amala). He not only signs her for the project, but he also has an affair with the superstar. He quickly becomes entangled in a web of forbidden love, complicated connections, and terrible drama. Watch the series to find out how he will be able to mend his shattered family ties!

Ranjish Mahesh Bhatt’s web series, Hi Sahi, is full of drama and emotions. The story is engaging, and the performances are superb. Tahir deserves praise for his perfect performance as Shankar. Aside from him, Amrita and Amala do their best to make the show entertaining to watch. The series’ climax deserves a standing ovation. When it comes to direction and writing, both are excellent, but there is still room for development. Some locales or sequences failed to capture the spirit of the 1970s. Overall, it’s a good program worth watching if you like Tahir and Mahesh Bhatt.