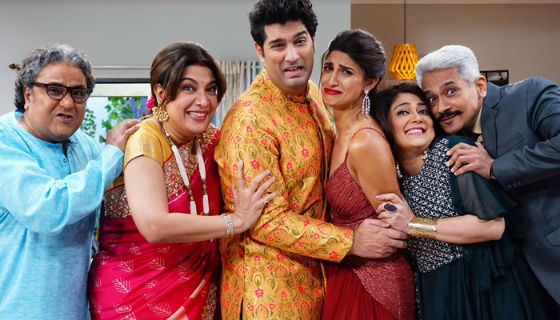 Sandwiched Forever is a web series in Hindi that premiered on SonyLIV on December 25, 2020. The show, directed by popular Rohan Sippy, also provides as a welcome diversion from the flood of criminal thrillers that have flooded digital series platforms. The show’s writer is Devand Kakkad, and the unique music while sound is created by Pankaj Awasti. Furthermore, it is available in both Hindi and English.

Sameer (Kunal Roy Kapur) and Naina (Aahana Kumra), a young couple, are overjoyed to be married. They also wished to live a self-sufficient life. Their thoughts were thrown into the air, however, when both sides of their parents decided to keep a watch on them and moved in next door. Naina is a badminton player, while Sameer is a freelance game developer. The daily hysterical circumstances as a result of everyone living closer to each other adds flavor to the show, along with the typical harsh comments from respective in-laws. The young couple’s battle is both amusing and tragic at moments.

It is a Christmas present for binge-watchers, having premiered on December 25. It features a wonderful blend of comedy, drama, and suspense. Furthermore, the show’s well-known cast lends a touch of glitz to each episode of the Hindi web series. It’s a lighthearted comedy that you may watch with your closest friends. However, because to the numerous sexual implications, it is unlikely to be with relatives. On the other hand, it falls short of the success of comic stars such as Sarabhai Vs Sarabhai and Dekh Bhai Dekh. As a result, it’s a good one-time watch show.