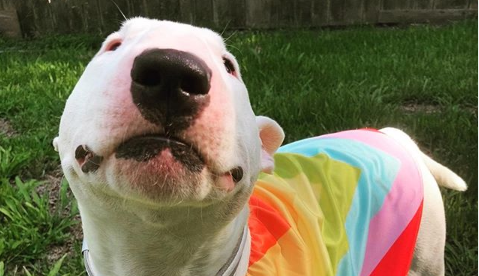 Explained : Truth Behind Walter The Dog’s Death | How Did Walter Dog Die?

You won’t be unfamiliar with the image of Walter the Dog even if the name is. The front camera or gazing meme, which features a closeup of the bull terrier’s face, is well-known. When the dog’s owner uploaded a photo with the comment “When u open the front-facing camera on mistake,” the picture quickly went viral. In order to refresh your memory, look at the picture.

when u open the front-facing camera on accident pic.twitter.com/xeUesJOAej

Since then, Walter’s visage may have served as inspiration for other memes. However, Walter has been the target of a death rumour, like most internet celebrities, which has worried online users. Let’s start by making sure Walter is still alive and well. How did the death rumours begin, then?

When a website named CelebritiesDeaths.com published an article with images of a terrier with several gunshot wounds, rumours about Walter’s passing began to spread. Many people failed to realise that Walter’s name had been misspelt as the piece gained popularity. While posting this information on Twitter and Instagram, some internet users posted condolences. Many others also remarked on how horrifying Walter’s death was.

In the end, Walter’s ostensible owner Victoria Leigh denounced these claims and put out the online fire that had sparked. Nelson is Walter’s true name, and despite not being a verified account, his Instagram page has a sizable follower base. Leigh clarified that Walter and Nelson are not the dogs seen in the images that have been circulating. Billy the dog died in a Philadelphia robbery in February 2020.

Victoria has posted a clear statement refuting the myth with the caption, “Hello, internet users. I’m not sure where this picture came from, but I’m delighted to say that Nelson is still alive. The injured dog in the vet images is named Billy. Despite being shot while defending his owner during an armed robbery, he has since fully recovered (see second slide). Billy doesn’t merit being used as a sadistic hoax. Billy is deserving of praise for his courage and excellence. Nelson’s social media sites, here and on Twitter (@.PupperNelson), will provide updates if anything (God forbid!) ever happens to him. Any other information you see online is merely a hearsay.

She also published a much funnier follow-up post that featured a picture of Walter holding a sign that said, “The dog is alive.” Netizens will undoubtedly feel relieved to hear that the dog who served as the inspiration for the popular meme is doing well. To allay any concerns, as you can see, the sign in front of Walter is outdated.

In conclusion, a rise in death hoaxes and other false information has been attributed to the practise of disseminating news on the internet without checking the source. Sadly, Walter the Dog was the target of one of these rumours. But because Walter has now been assimilated into the meme culture, he is still alive and will keep existing in our memory. [Image on the Cover Courtesy of puppernelson/Instagram]

10+ Best Vin Diesel Movies Not Including The Fast & Furious Franchise