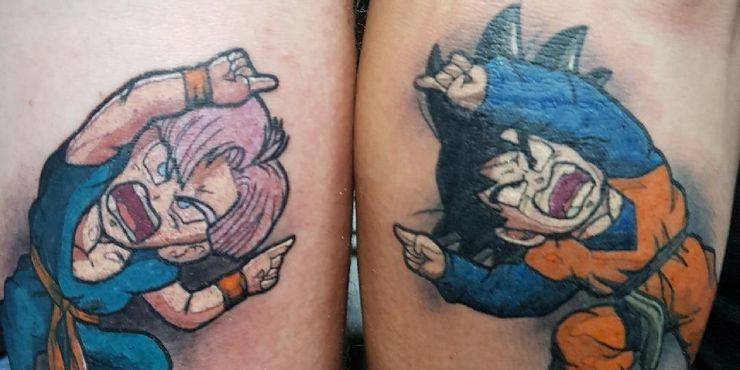 It’s no wonder that Dragon Ball is popular. Since 1984, the show has been on and off, and it has come a long way. What started off as a narrative about gathering magical wishing orbs evolved into a series about fighting godlike foes. The plot mostly follows Goku’s exploits as he trains to become the strongest person in the universe and beyond, but there are a number of famous characters in the series, including Trunks, Vegeta, and Piccolo.

When it comes to fighting action, the show is all-around amazing, and there’s just so much awesome factor in it that it’s no surprise that fans would be eager to tattoo their arms with legendary Dragon Ball scenes. Due to the fact that tattoos are a statement of dedication due to their somewhat permanent nature, these folks have to be serious fans to get them. 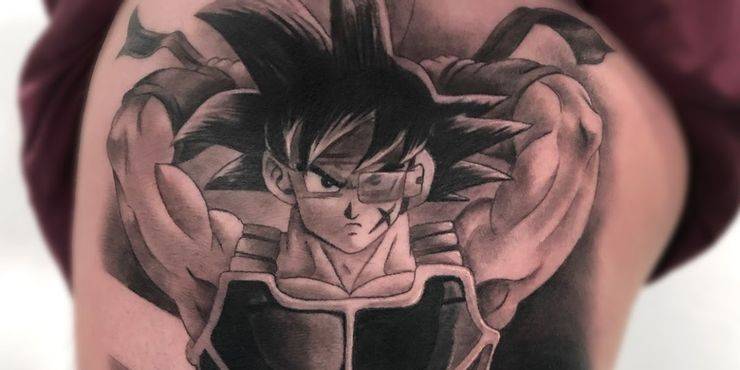 While Bardock was not featured prominently in the Dragon Ball series, he plays an important role in the plot. He is Goku’s father and a Saiyan. Frieza sent his troops to wipe out Bardock’s unit when he felt the Saiyans were becoming too powerful. After discovering his squad members had been slain, Bardock launched a one-man revolt against Frieza.

Unfortunately for Bardock, Frieza’s might was too much for him to handle, and he died as well as the devastation of Planet Vegeta. Regardless, he is renowned for his willingness to stand up to Frieza. Bardock begins his revolt against Frieza while wearing the bandage of a fallen friend around his head in this tattoo.

Pilaf existed long before Cell, Frieza, or even Vegeta. Pilaf, the original Dragon Ball villain, was a stumpy goblin-like creature that sought the Dragon Balls in order to fulfill his dream of becoming master of the world. Pilaf was never one to take himself seriously. He was essentially just a puny, bossy runt with a Napoleon complex, and he was more of a comedic relief for Goku and his buddies than a real threat.

This tattoo encapsulates Pilaf perfectly. It’s a more realistic depiction of the creature, complete with his trademark attire, which resembles a cross between a clown and a European nobleman. He’s holding one of the seven Dragon Balls, so he’s probably feeling a bit of a power rush right now. 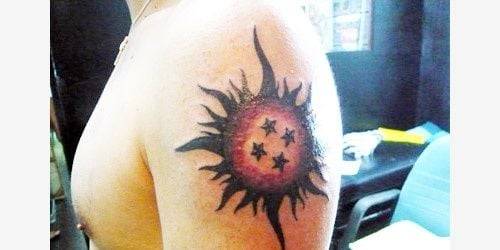 While the Dragon Balls are powerful when viewed as a whole, there isn’t much that distinguishes any of them apart from their star count. The four-star Dragon Ball, on the other hand, has to be the most iconic. While it is identical to the others, this Dragon Ball holds special meaning for Goku because it was given to him by his grandfather. As seen in the opening episode of Dragon Ball Z, Goku makes an effort to gather this Dragon Ball grandfather’s Dragonball for sentimental reasons, and even offers it to his son, Gohan.

This fan obviously knows his Dragon Balls because he chose the four star over the other six. 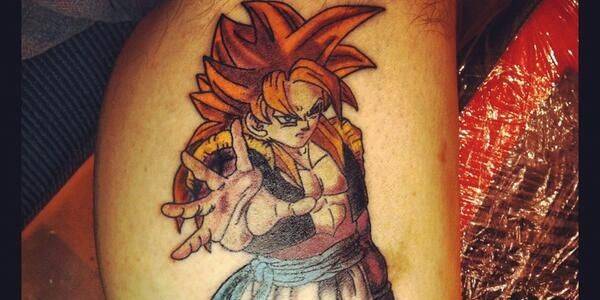 GT was a bad series, as everyone in the Dragon Ball fandom knows. It was poorly written, had a clumsy plot, and crammed in boring characters while ignoring fan favorites. It’s so awful that it’s no longer considered canon. That being said, Super Saiyan 4 was actually rather enjoyable, especially when Goku and Vegeta fused to form a Super Saiyan 4 version of Gogeta. This version of Gogeta was by far the most powerful character in GT, and his arrogance essentially prevented him from killing Syn Shenron.

He may be arrogant, but he has every right to be, and while GT may no longer be important to Dragon Ball, getting a Gogeta tattoo is still very great.

In the original Dragon Ball, Nimbus was one of Goku’s most devoted buddies. It’s basically a yellow cloud that only the pure of heart could fly through. Nimbus could travel at high speeds, but after Dragon Ball Z made flying a standard practice for the Z Fighters, it became obsolete and was rarely seen.

Even yet, it was one of the best portions of Dragon Ball because seeing Goku ride a little cloud was visually beautiful. Obviously, this person agrees because they have a great tattoo of Goku having a good time while riding Nimbus.

Fusion is a nice concept in general. Combining two characters’ personalities and appearances is such a great notion, and while Gogeta is cool, Gotenks holds a particular place in our hearts. Gotenks has a cool design and some really cool attacks. His battle with Super Buu was epic and hilarious, and it got even better when Gotenks became Super Saiyan 3.

This tattoo is ingenious and innovative, as it depicts the union of the two sides of Gotenks, Trunks and Goten. Each is on their own arm, and when they collide, Fusion happens! 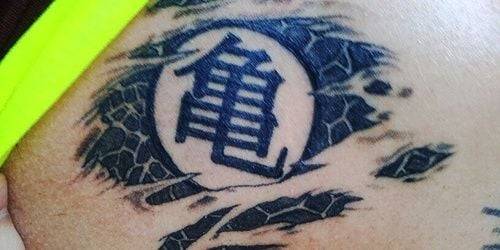 Despite the fact that Goku has well beyond Master Roshi’s teachings, he still wears the kame sign on his attire. Because Roshi’s martial art is Turtle School, the word kame means turtle. Aside from Goku, numerous characters, notably Krillin, Yamcha, and occasionally Gohan, wear this emblem on their clothing. Goku appears to be a fan of the emblem, as he has worn it on his attire for almost as long as the show has been on the air.

As a tattoo, the kame kanji works wonderfully. It’s a straightforward design that doesn’t rely on a lot of detail or sophistication. 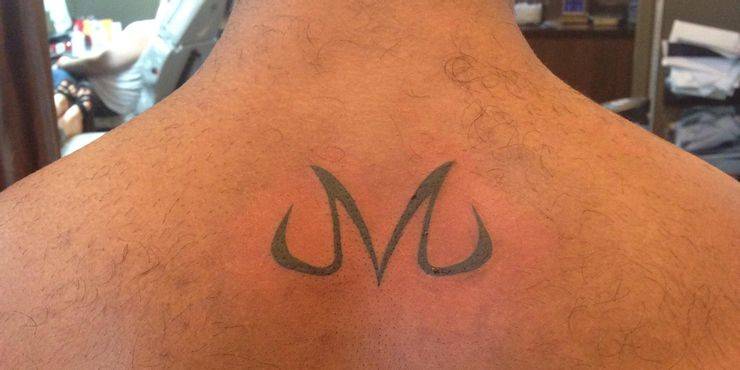 Babidi’s followers are marked with the Majin sign, which he uses to make them evil. The mark is worn by a number of Babidi’s followers, but it is most prominently worn by Vegeta, who willingly allowed Babidi to turn him evil in order to eventually destroy Goku. The Majin sign has the ability to make individuals who are exposed to it stronger, but this comes at the penalty of being wicked.

Clearly, this individual is unconcerned about evil, as he chose to have the Majin Symbol tattooed on his back. 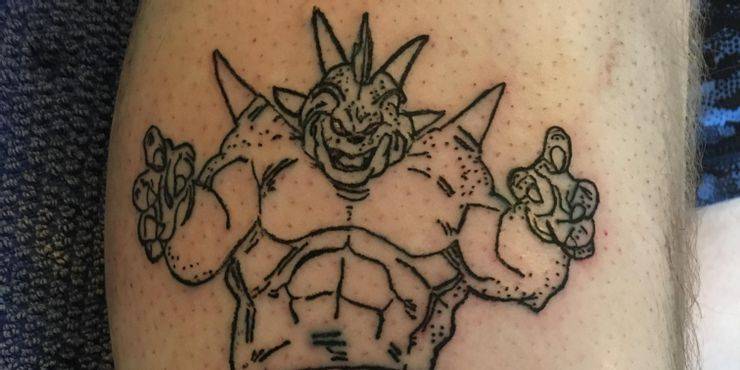 While Shenron is the dragon who grants wishes on Earth, Porunga is the dragon who grants wishes on Namek. Because it is simpler for the Z Fighters to acquire the Earth’s Dragon Balls than Nameks, he is rarely employed in the series. He’s has a cool look to him, since he’s made to look like a cross between a djinn and a dragon. He even sports Namekian antennas, which is quite amusing. He may also grant three wishes rather than Shenron’s two. Porunga has been summoned and is ready to grant some desires in this tattoo.

The Hair Of Goku And Chi-Chi 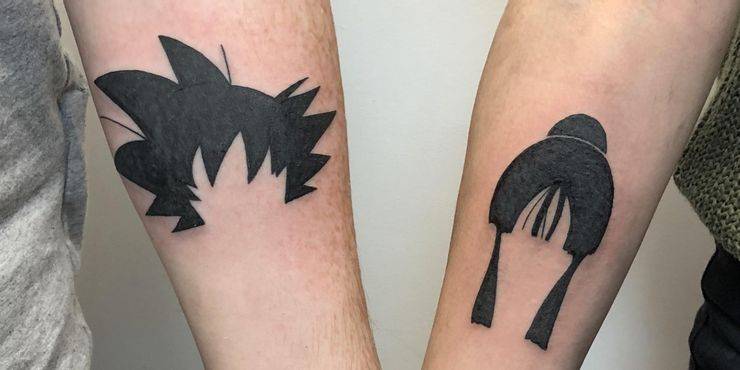 Goku and Chi-Chi aren’t the most romantic couple in the world. Goku often dismisses her to train, and Chi-Chi shouts at him everytime he appears. Having said that, they appear to genuinely love each other. They’ve been romantically involved since childhood, and they’ve raised two children together since then. Their family may appear dysfunctional to the outside observer, but everyone appears to be happy, thus the dynamic may be working for them.

In any case, this tattoo is charming. It’s a couple’s tattoo that features both Goku and Chi-trademark Chi’s haircuts. In comparison to some of the other tattoos on this list, it also stands out.

15 Shows To Watch If You Like BoJack Horseman | Dark Humour, Intelligent And Adult Shows