The Weasley family immediately won over the hearts of Harry Potter fans. There was something immediately endearing about this redheaded family of pure-bloods, whether it was their generosity and sincere love for one another or the initial glimpse into the world of wizards and witches on the big screen.

The twins Fred (James Phelps) and George (Oliver Phelps), who are hilarious, won many fans over just as soon as the rest of the family. They never failed to make you smile when they were on-screen in any of the movies they appeared in. These boys were usually up to no good, whether it was pulling pranks at home or school or running their joke shop.

Finishing Hogwarts With a Bang! 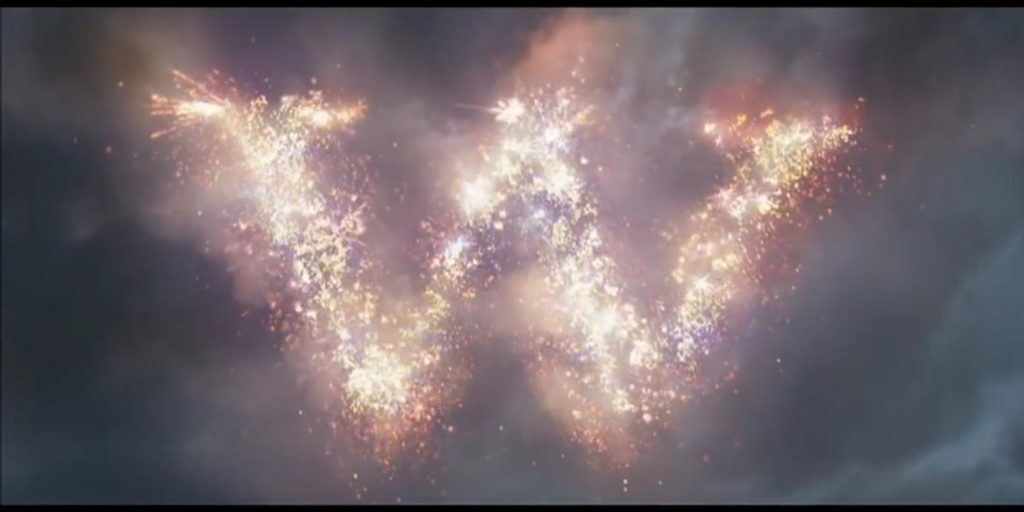 Who doesn’t hate Imelda Staunton’s portrayal of Dolores Umbridge to the core? The wizarding world introduced the teacher in Harry Potter and the Order of the Phoenix with some pretty dubious teaching strategies. She’s one Hogwarts instructor who made fans want they could use the Cruiciatus curse on her, from literally cutting into the hands of the pupils to very almost using the curse on Harry.

Fred and George quickly devised a strategy for the children in her care after solace-giving for a lad in tears in the best way they knew how. Using a traditional Weasley Twins joke. They performed a spectacular fireworks show to interrupt the OWL tests. The twins’ and the entire room’s contagious happiness was enough to make you smile, but Umbridge’s expression of displeasure as her wall of regulations came tumbling down was a tremendous bonus. This was an extremely proud moment to be a Weasley, and it ended with a fire-cracking “W” in the sky. 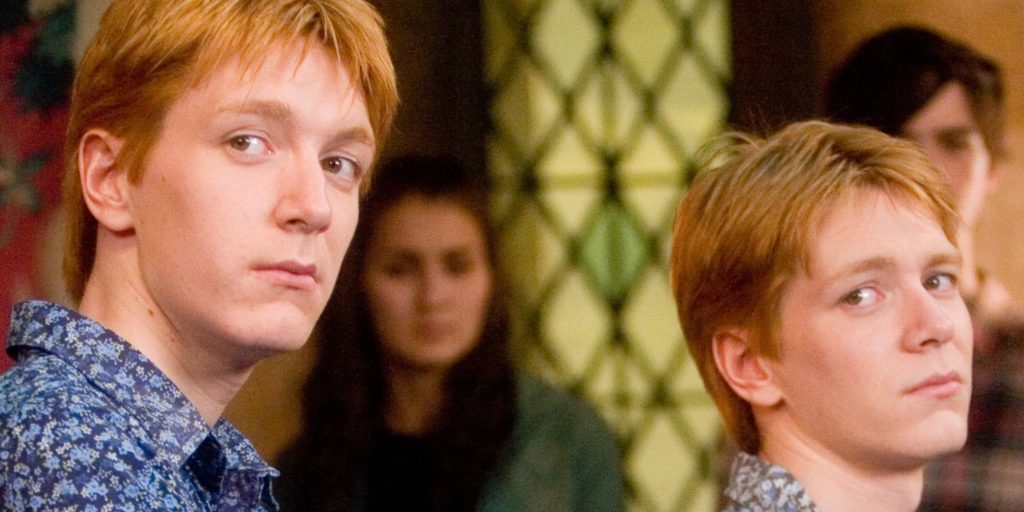 Even ten years later, it hurts to think about George without his trusted partner by his side. Fans were devastated by Fred’s passing. Whether you were aware of it beforehand or not, his passing is unquestionably among the most startling to occur in the Harry Potter series. Even though the sequence in the movie was only in it for a little over a minute, it was long enough for fans to be devastated by the loss.

The fact that this is the final Weasley twin moment makes it extremely harder to watch without crying. It will never be easy to witness as George clings to Ron after sobbing and hugging his father. The sheer image of these boys, who were always laughing, left grieving over the loss of the other will always have the capacity to crush your heart into a million pieces at the notion of this tragic final Fred and George moment. 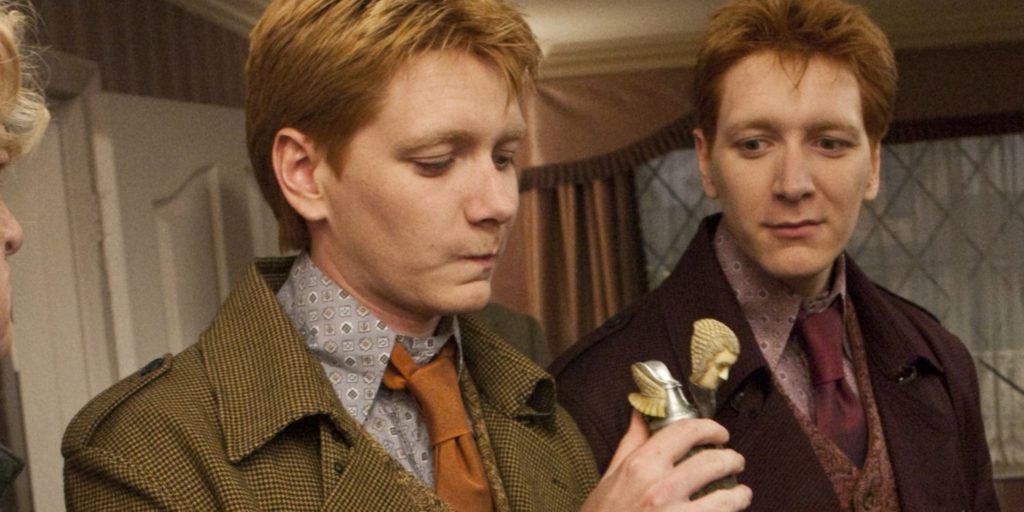 You could say that The Deathly Hallows Part 1 is the quiet before the storm. Within the first five minutes of the seventh Harry Potter movie, the audience was thrust right into the action, setting the stage for the characters’ many touching moments.

The Death Eaters attacked everyone as they sought to transport Harry to The Burrows during the Battle of the Seven Potters. “You good, Georgie?” George was severely bleeding when he and Lupin (David Thewlis) arrived at the Weasley residence. When Fred and Arthur (Mark Williams) returned to the house, Fred asked Arthur (Mark Williams) where his brother was, and when he didn’t hear reply, he hurried inside. Fred’s sincere anxiety and concern at seeing his brother bleeding and weak on the couch, even though the sequence ended with a lighter jest from George, will always make you tear up.

Giving the Marauder’s Map to Harry 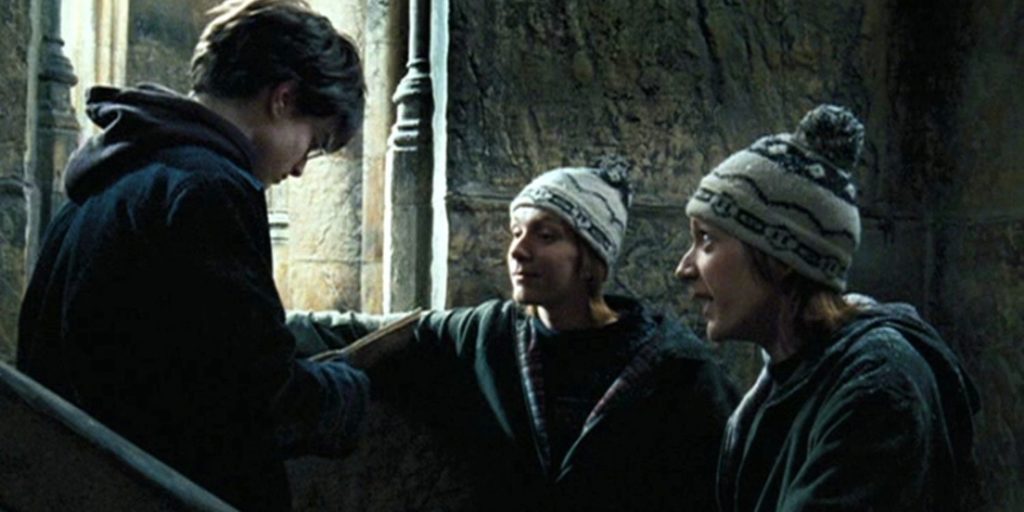 Everywhere they went, whether it was home or school, Fred and George were experts at getting into mischief. It contributed to their remarkable likability as people. At Hogwarts, they were known as the jokers and were frequently quite willing to encourage people around them to join in the fun.

Given that they were often up to no good in every movie, “I solemnly vow that I’m up to no good” is almost like their mantra. But it’s also a key to discovering the Marauder’s Map’s mysteries. The twins gave Harry (Daniel Radcliffe) the map they’d been using to sneak around since their first year in The Prisoner of Azkaban. They opened up countless opportunities for Harry to skulk around after giving him the map, exactly as they had done for years. You couldn’t help but smile whenever the lads got into mischief, especially when they invited others to join in on the fun. Indeed, mischief was managed.

The Opening of Weasley’s Wizard Wheezes 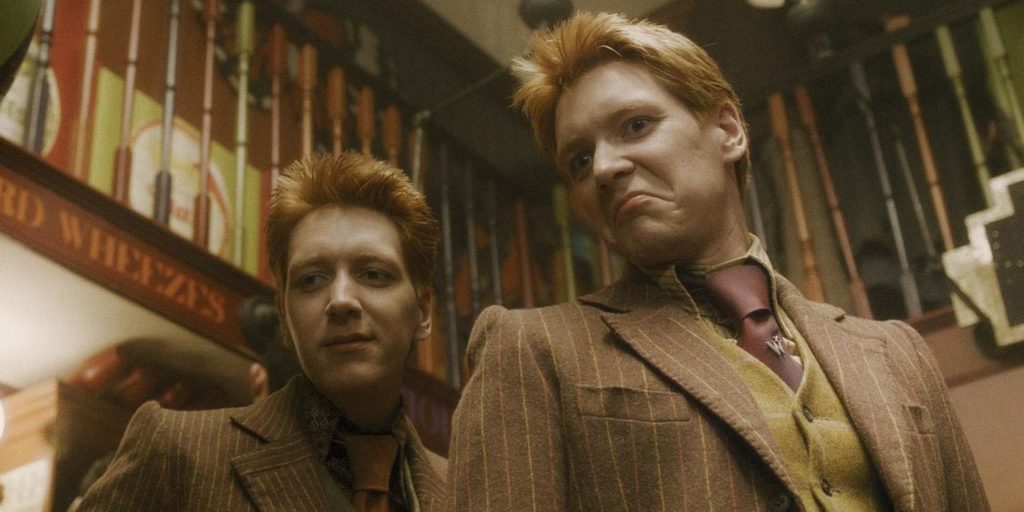 The twins’ decision to make jokes and practical jokes their profession was not at all unexpected. And a wonderful way for them to do it was to open Weasley’s Wizard Wheezes, their joke shop.

They offered a vast range of magical goods designed to cause mischief or mayhem, such as love potions, puke pastels, Peruvian instant darkness powder, nosebleed nougats, fainting fancies, and much more. These endearing wind-ups kept making everyone grin even as they ran their store, from winding Ron (Rupert Grint) up by raising the price for him to urging kids to utilise their items to get out of school.

Trying to Trick the Goblet of Fire 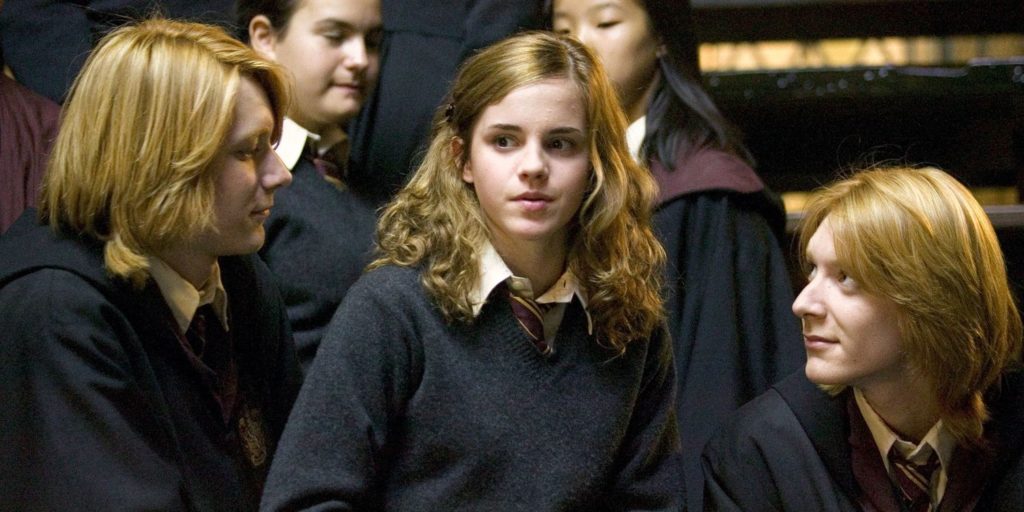 According to Hermione Granger (Emma Watson), the twins’ attempt to deceive the Goblet of Fire in order to take part in the Triwizard Tournament was one of their more “pathetically dimwitted” plots while attending Hogwarts. Even though they were unsuccessful, a hilarious situation immediately followed.

They were able to overcome the age barrier that Dumbledore (Michael Gambon) had drawn around the Goblet of Fire, so it initially appeared that the potion had been successfully prepared. It appeared as though their scheme had succeeded after entering their identities, but it backfired barely five seconds later, sending them flying across the room. Their anti-aging medicine had achieved their goal, but only to the point of grey hair, and seeing these two roll around and fight on the floor will always be entertaining. 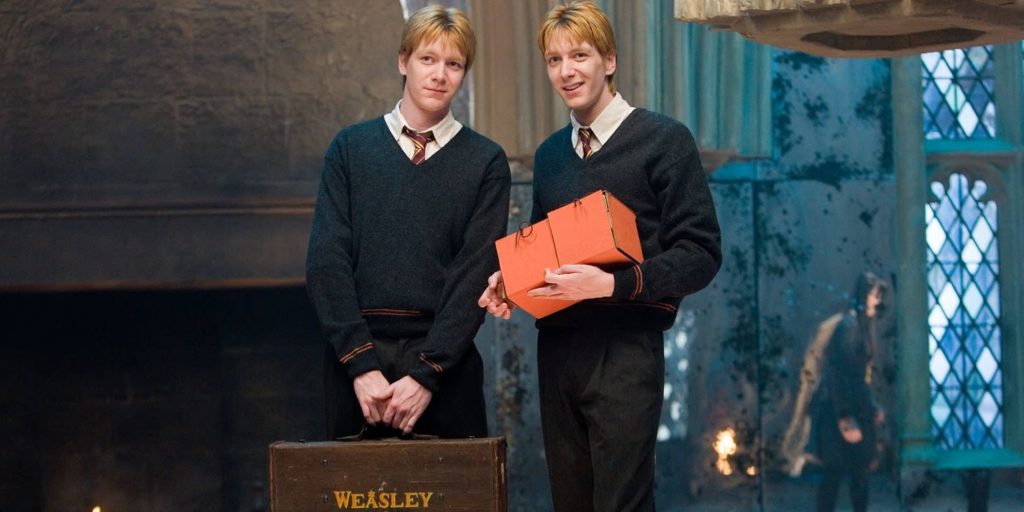 A brief but poignant scene. This is all the more heartbreaking knowing what comes after this wonderful brotherly moment. Despite being only 10 seconds long, the fan reaction to the twins’ brief interaction was profound.

Before the full-scale Battle of Hogwarts can reach its climax, George goes to Fred and asks, “Are you okay, Freddie?” While this Weasley twin scenario isn’t particularly well-known, George’s query and his sincere worry for his brother touched millions of people. When you consider what will happen later, this is one of the saddest moments to see due of the tears in their eyes and their brotherly love.