As he just demonstrated his most recent creation to Peter Parker and some of the other brightest teenagers in the Marvel Universe, Harley Keener is carrying on Tony Stark’s legacy in the pages of Marvel Comics. As a member of Stark’s new W.E.B. programme, Keener, who made his screen debut in Iron Man 3 in the Marvel Cinematic Universe, unveiled a stun blaster gauntlet that would make Iron Man proud.

This week marked the debut appearance of Harley Keener as a comic book character, according to Marvel Comics. Keener first made an appearance in Iron Man 3 (as Ty Simpkins), where the bright kids helped Tony Stark rebuild himself after his entire existence literally came tumbling down. The character wasn’t modelled by any comic book characters. Simpkins also made an appearance during Stark’s burial in Avengers: Endgame, indicating that the character’s narrative isn’t finished in the Marvel Cinematic Universe. Keener makes his formal comic book debut in the most recent W.E.B. of Spider-Man comic.

Peter Parker arrives at the W.E.B. (World Engineering Brigade) facility, which Stark established to give some of the most talented children in the Marvel Universe a place to be creative and design new technology and inventions, in W.E.B. of Spider-Man #1 by Kevin Shinick, Alberto Alburquerque, Rachelle Rosenberg, and Travis Lanham. Harley Keener, Onome, Squirrel Girl, and Lunella Lafayette are some of Parker’s fellow W.E.B. members. While Keener and Peter argue about who is indeed Iron Man’s right-hand man, Harley displays one of his most recent creations to demonstrate his legitimacy. 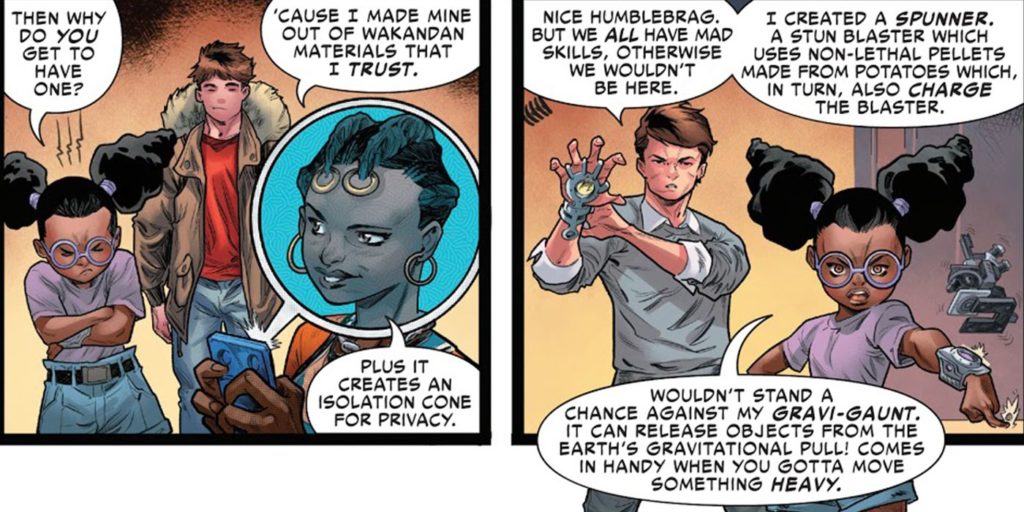 Keener displays a “Spunner” gauntlet for admiration. The tool is a stun blaster that uses pellets made of non-lethal potatoes (which is a nice reference to his potato gun in Iron Man 3). Those potatoes eventually power the weapon’s laser. Given that Keener was obviously influenced by the Avenger, it appears that Tony Stark put the technology he gave him at the end of Iron Man 3 to good use.

Harley’s work may not be as high-tech as some of the other W.E.B. members’, but it demonstrates his creativity and the reason he was initially invited to the programme. Keener’s continued pursuit of building and creating things in the service of science is undoubtedly something Tony Stark would be proud of. Given that Harley Keener is now collaborating with cutting-edge technology and some of the smartest teen minds in the Marvel Universe, it will be exciting to see what more he can produce. W.E.B. of Spider-Man #1 is currently available at comic book retailers.