Millions of viewers tuned in to “Chrisley Knows Bestdebut “‘s episode in 2014 to watch the guilty-pleasure programme. It focused on the five children and lives of ostentatiously wealthy Southerners Todd and Julie Chrisley. Their first-world problems over the years included Savannah’s effort to win the Miss Teen USA beauty contest, Todd’s mother Faye’s overspending on a diamond ring, and Todd and Julie’s attempts to employ a babysitter (via IMDb).

However, there were numerous unfortunate circumstances involving the Chrisley family that you were unaware of. Todd boasted that his family spent six figures a year simply on apparel, but his income didn’t really match his way of living. The Chrisleys filed for bankruptcy in 2012, alleging that their assets weren’t sufficient to pay off their debt of around $50 million (via People). The reality pair then found themselves in even more difficulty in 2019 after Todd and Julie were indicted by a federal grand jury on many charges of bank and other crimes, according to the U.S. Department of Justice. They were charged with fabricating information while requesting loans totaling millions of dollars, which they later used to pay for their extravagant expenditures. Additionally accused of dodging taxes on their income were Julie and Todd.

Even though the Chrisleys insisted that a former employee had actually perpetrated the bank fraud in Todd’s name, the judge wasn’t persuaded. The Chrisleys again denied any involvement. In June 2022, they were found guilty of the allegations, and they now know what will happen to them.

The Chrisleys are trading their designer duds for prison gear 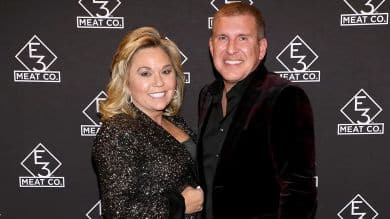 The Chrisleys received a harsh punishment on November 21, 2022, from a federal judge for tax fraud and evasion. Todd Chrisley received a 12-year sentence with a 16-month probationary period following, according to People and other outlets, while Julie Chrisley was given a 7-year sentence with a 16-month probationary period. Their attorney, who was also found guilty of encouraging their deception, will spend 36 months in prison. According to Insider, if not for their ages and the fact that they look after Todd’s elderly mother, Faye, they might have perhaps received a heavier penalty.

The reality stars argued at the sentence hearing that their two youngest children, Grayson and Chloe, needed their mother. Even though it was a tragic scenario, the judge emphasised that it didn’t justify their behaviour. She asserted, “I have no reason to suspect the sincerity of either Chrisley. I is unable to overlook the case’s avarice and flamboyance, nevertheless.

Todd and Julie Chrisley have revealed the secret to their supporters’ burning need to know how they have survived their legal troubles: faith. Julie shared this quotation on Instagram in September: “God is still working with you. The God of the comeback is ALWAYS God.” Todd made a more sarcastic comment: “Please say a prayer for me after talking smack about me. I aspire to be flawless like you.”