TLC’s “1000-Lb SIsters” has been a hit with reality TV viewers for three seasons. The series introduced viewers to the Kentucky-based sisters Tammy and Amy Slaton, who both struggled with morbid obesity and consented to allow their lives be documented as they worked to lose weight. The more successful of the two, Amy was able to keep the weight off and meet the requirements for bariatric surgery. She also got married to Mike Halterman, her on-screen boyfriend, and gave birth to Gage, her first child. (According to People, Amy had another child, Glenn, after the third season concluded.)

The third season of the programme concluded on a concerning note: Tammy’s health rapidly deteriorated, and she was transferred to an Ohio facility that specialises in treating obese patients, Windsor Lane Health Care and Rehabilitation Facility (via The Sun). She is still there as of this writing, working on her breathing issues caused by obesity and weight loss. But Tammy didn’t let this setback deter her. She amusingly experiments with new filters on her Instagram and TikTok accounts, periodically updating followers on her health. She recently experienced bacterial infection in her tracheostomy and needed antibiotics, but she assured her fans that “I’m well.”

For fans, there are now two pieces of excellent news: one regarding Tammy and one about her programme. 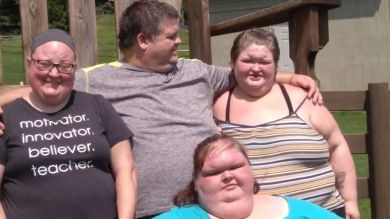 People broke the shocking news that Tammy Slaton, the star of “1000-Lb Sisters,” had married Caleb Willingham, a man she met at the rehab centre where both were receiving treatment, in November 2022. Their proposal, which took place in the center’s parking lot, was covered by The U.S. Sun. Unnamed source told the magazine that they were happy Tammy met Caleb in person rather than beginning a relationship online, in contrast to her past relationships. “They can relate to one other’s struggles in many ways. It’s great that they have supported each other greatly while in treatment “added the source.

The groom was dressed in a dark shirt and brown suspenders, and Tammy was carrying a bouquet of sunflowers in the pictures released by People. In a burnt-orange outfit, sister Amy Slaton Halterman was present as a member of the wedding party. Tammy revealed to the publication that her current name is Tammy Slaton Willingham.

TLC added another unexpected bit of news while sharing their excitement with their followers on their official Instagram account: The fourth season of “1000-Lb Sisters” premieres on January 17, 2023. This declaration puts an end to rumours that Amy Halterman was leaving the programme and that the show had been cancelled. We can’t wait to watch this new season, which is rumoured to include Tammy and Caleb’s romance as well as Amy’s second pregnancy.