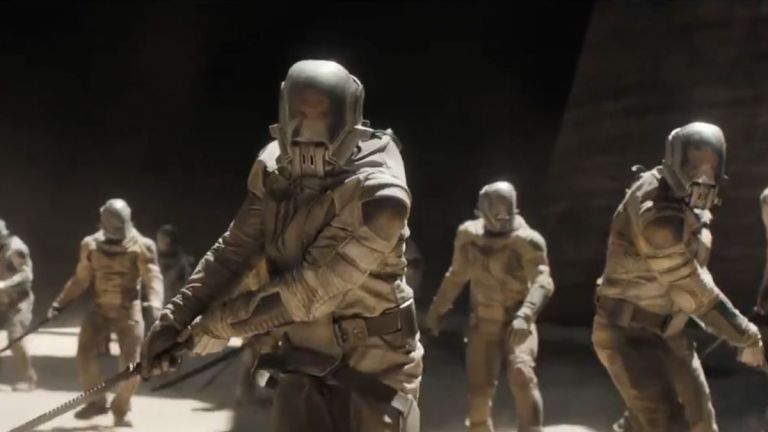 It appears like we have seen this song and dance before at first sight. Under the comings and goings of Offworld spaceships, an army of white-armored warriors is arranged in precise square formations. They are troops, the alleged elite, and the Sardaukar hit squad of the Emperor. But they don’t seem all that dangerous to someone who has seen a Star Wars film or nine, right? This supposedly unbe atable scourge of the Empire—sorry, Imperium—is built up until our protagonists begin dispatching them one by one.

Well, it turns out that the Sardaukar from Denis Villeneuve’s Dune and Frank Herbert’s Dune aren’t Stormtroopers, and anyone who doubts this can ask Duncan Idaho’s (Jason Momoa) ghost for evidence. Yes, the devoted Atreides man fought the Sardaukar valiantly until the last end, and he even brought a good number of them with him to the afterlife for company, but as he noted earlier in Dune, “When you cross swords with a Sardaukar, you know it.” And it was the very last thing Duncan ever knew.

The Sardaukar battalions similarly destroyed the majority of Duke Leto Atreides’ military forces before finally destroying the whole Fremen citadel (although not without incurring heavy losses themselves). The Sardaukar truly are “The Emperor’s blades,” as one of their officers boasts, “more brutal and ruthless than Stormtroopers. Those who oppose us crumble.

This makes the little glimpse we get of their home on Salusa Secundus, where men appear to be “trained” while being crucified upside down, more creepier. Additionally, a truly unnerving religious chant is provided from above by a figure with a gravelly voice.

We assure you that the Sardaukar are significantly worse than you know, even if you haven’t read Herbert’s 1965 novel or any of the Dune prequels.

How Sardaukar Are Made

The Sardaukar, or at least their predecessors, are not natives of the planet Salusa Secundus. House Corrino, the dynasty that has dominated the Known Universe for millennia under the reign of the Padishah Empire, once resided in Salusa Secundus. Salusa Secundus’ harsh conditions served as the foundation for House Corrino’s consolidation of power as the biggest and most dangerous dynasty in the cosmos.

However, the Corrino House turned their former homeworld into a prison planet after relocating to a more beautiful planet on Kaitain. Consider the last scene of Alien 3 or even just the Australian penal camp. Anyone that House Corrino deemed seditious or evil was punished to spend the rest of their days in abhorrent circumstances.

But what transpired to them after they were sent to the most well-known hellhole in the Imperium? The Padishah Emperor forbade any kind of survey or open records to be kept of the events on Salusa Secundus, hence it remains uncertain. This is due to the fact that the victims of the Corrinos were sentenced to brainwashing and assimilation into a warrior culture’s cult in addition to being sentenced to suffering for all of eternity. The weak were separated at birth from the strong, just like the Spartans of old earth, and the healthy from the ill.

The merciless and obsessive training regimen of their progenitors, who were in turn trained by their dads to have a religious-like deference toward all members of the House Corrino, is supposed to be the reason six out of every 13 children born on Salusa Secundus die before the age of 11. One wonders if the royal family had as much of an impact on the Unsullied in George R.R. Martin’s “A Sword of Ice and Fire” as the Stormtroopers in Star Wars. In the royal family’s favour, they are raised to be unrivalled swordsmen and warriors (and, apparently, to have a decent middle class lifestyle).

Why the Sardaukar Use Swords

Blades are preferred over projectile weaponry by both the Sardaukar and their enemies. This is because the protective Holtzman shield, which you see in use throughout the movie, was invented. These personal defensive shields were created thousands of years ago to shelter users from any form of projectile that might be launched from a weapon, such as a pistol, laser, or most likely a bow and arrow.

A new interest in traditional swordplay developed as a result of this invention, and new strategies were developed to enable a blade to travel slowly enough to get through the shield’s protective barrier. This invention instantly reenergized warfare in the world of Dune. Villeneuve helped viewers understand this by making the shield glow blue when it successfully deflects an attack and red when anything manages to get through its defences.

It is stated that the Sardaukar are the best warriors in the entire Imperium in negating the utility of a Holtzman shield. Duncan Idaho, though, asserts that the Fremen seem to be more adept combatants. Undoubtedly, the Fremen were raised in a region as ruthless as Salusa Secundus. But when we get that eagerly awaited Dune Part Two, I suppose we’ll find out who actually has the superior warrior culture.

After Pete Davidson’s Kim Tattoo, Kanye’s Girlfriend Got One For Him That Says Ye’

Pokemon Go Ditto Guide: How To Easily Catch A Ditto In Pokemon Go