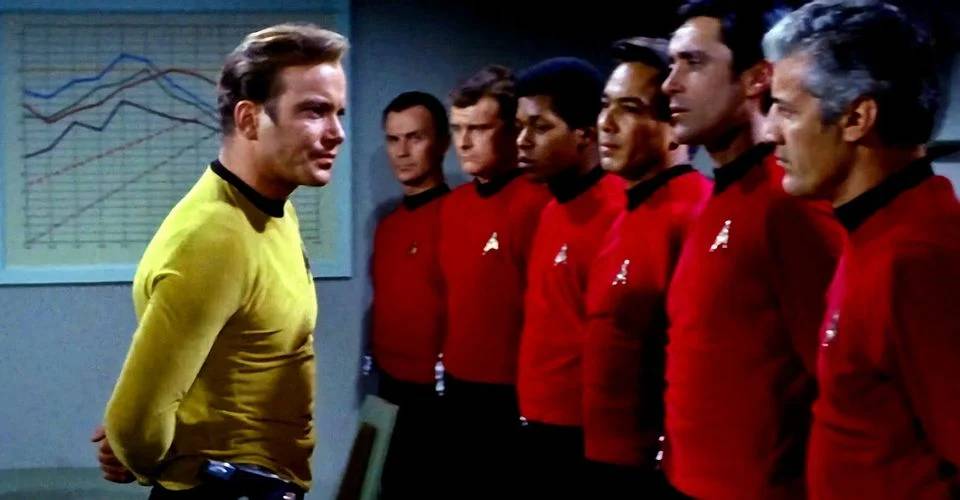 The term ‘Red Shirts’ comes from the crimson uniforms worn by security officers on Star Trek: The Original Series, and they’re known for being the show’s sacrificial lambs for whatever alien threat Captain James T. Kirk (William Shatner) and the crew of the Starship Enterprise were up against each week. Kirk, Spock (Leonard Nimoy), and the other main characters would beam onto a planet with a detachment of red-shirted security personnel in a number of TOS episodes. Normally, the Red Shirts would be eliminated. It happened so frequently that it became a Star Trek cliche. With the release of the Star Trek films and Star Trek: The Next Generation, however, the colors of Star Trek uniforms altered, and red became the characteristic color of Starfleet Officers on the Command track. This meant that Kirk and Spock from the Star Trek movies, as well as Captain Jean-Luc Picard (Patrick Stewart) and Commander Riker from Star Trek: The Next Generation, were now the’red shirts,’ and as prominent characters, they were unlikely to die at the hands of aliens.

When Boimler, a Starfleet historian, was shocked that the ambitious club of Ensigns who asked him to join named themselves ‘Red Shirts,’ presumably clueless to the significance of that appellation, Star Trek: Lower Decks discreetly nodded towards the legacy of the Red Shirts. Regardless, Bradward briefly joined the Cerritos Red Shirts because he aspires to be Captain Boimler one day. But Brad soon discovered that the Red Shirts merely wanted to be like great leaders like Captains Riker and Picard without having to make difficult decisions or execute heroic feats. As a result, the Cerritos’ Red Shirts are a different type of joke; while they don’t get killed off at random like the original TOS Red Shirts, they’re just as ineffective in a real crisis. 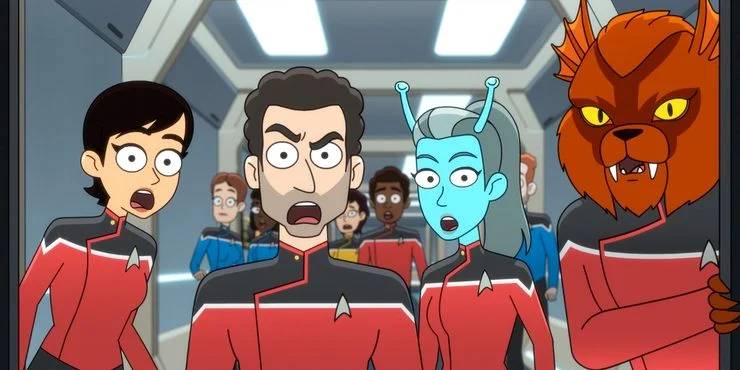 Despite the fact that Red Shirts have become Starfleet heroes such as Picard, Riker, and Captains Sisko (Avery Brooks) and Janeway (Kate Mulgrew) from TNG forward, there have been instances of Red Shirts causing problems in Star Trek, particularly inside Starfleet Academy. In Star Trek: The Next Generation, Wesley Crusher (Wil Wheaton) became engaged with Nova Squadron, an ambitious gang of cadets who were responsible for the death of one of their classmates and covered it up. Jake Sisko (Cirroc Lofton) and Nog (Aron Eisenberg) met Red Squad in Star Trek: Deep Space Nine, another exclusive society of cadets who had their own Defiant-class spaceship and participated in the Dominion War. However, in order to prove themselves, Red Squad assassinated practically everyone, making them worthy of the ‘Red Shirts’ legacy.

By putting Armus in a cameo, Star Trek: Lower Decks indirectly referenced how Lt. Tasha Yar (Denise Crosby) perpetuated the heritage of Red Shirts as sacrificial lambs in TNG. Tasha was slain by an oily alien monster in TNG season 1; despite the fact that Lt. Yar now donned a gold uniform as the USS Enterprise-Security D’s Chief, she perished in the same manner as a TOS Red Shirt. Ensigns Beckett Mariner (Tawny Newsome), D’Vana Tendi (Noel Wells), Sam Rutherford (Eugene Cordero), and Boimler from Star Trek: Lower Decks pranked Armus and got revenge for the ‘Skin of Evil’ killing Tasha Yar around 15 years before in the Star Trek universe.