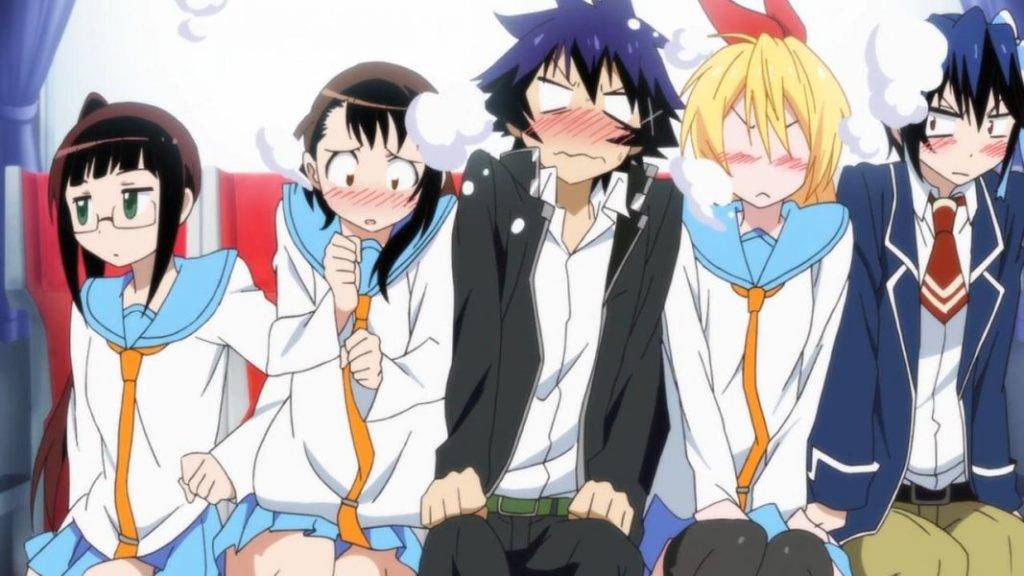 12 Must Watch Harem Anime of All Time

While the former features a male protagonist who has several lovers, the latter focuses on female protagonists who have a plethora of male love interests. Despite the fact that they are both extremely entertaining, we would devote our complete attention to harem shows. Netflix, Amazon Prime, Funimation, Hulu, and Crunchyroll all have harem anime accessible for streaming. 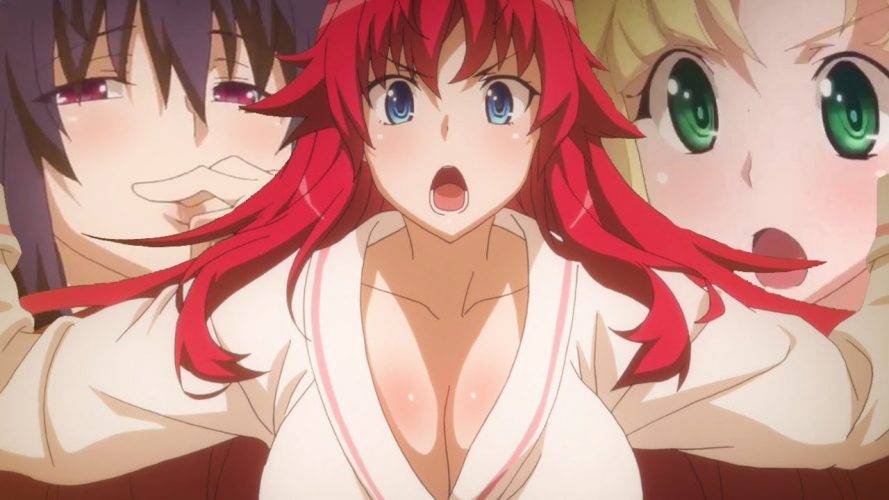 The inclusion of ‘High School DxD’ on this list is self-evident, considering the series is possibly the most popular harem anime of all time. The show not only has an intriguing premise, but it also features some sexually explicit sequences that add to the overall story. It follows the follies of Issei Hyoudou, a perverse high schooler who is killed by a fallen angel on his first date.

Fortunately, he meets Rias Gremory, a high-ranking devil who reincarnates the boy and decides to enslave him. It is the start of his introduction to the violent world of devils and angels, which is full of surprises at every turn. All of the episodes are available on Funimation. 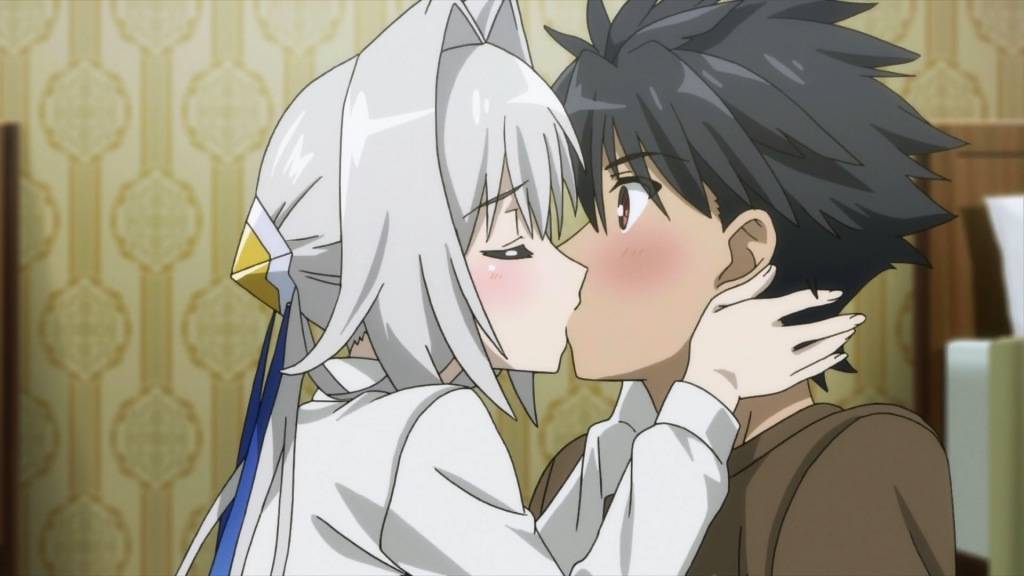 When Savage, an extraterrestrial species, strikes humanity with the intent of wiping it off the face of the Earth, humanity confronts an existential peril. A weapon known as Hundred must be employed effectively in order to launch a counter-attack; else, the aliens will easily conquer. Following multiple experiments, it is discovered that the unusual weapon is best suited to Hayato Kisaragi, a youth who has previously survived a dangerous Savage attack.

Hayato is trained at Little Garden, a prestigious military academy, before launching a proper attack against the enemies. The youth naturally captures the interest of several female peers in the academy and is involved in countless steamy meetings with a number of them after acquiring a high position as humanity’s greatest hope in an epic war for survival. The series can be found here. 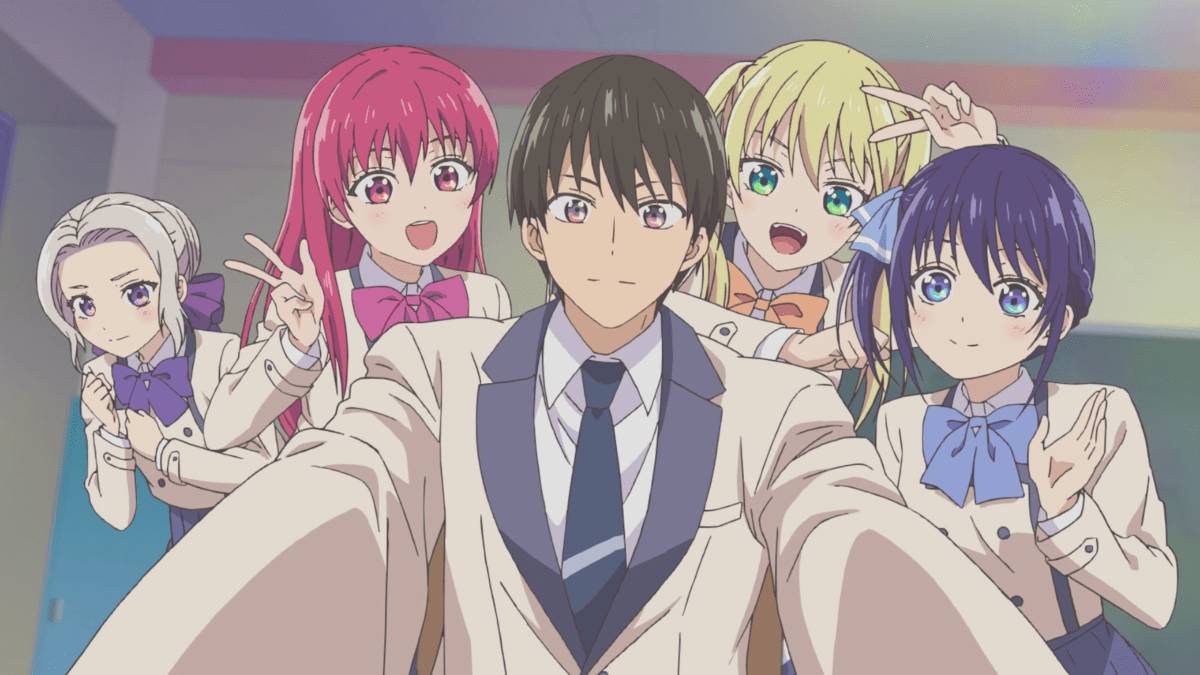 ‘Kanojo wo Kanojo’ is a contentious choice because it lacks the mass appeal of the other shows on the list. The harem romance show, on the other hand, is quite promising, and its amusing and engaging idea should help it gain the readership it deserves in the future years. The anime follows Naoya Mukai, a high school student whose romantic efforts are denied by his childhood crush Saki Saki until she ultimately accepts him as her partner.

When his classmate Nagisa Minase expresses her feelings for him, Naoya can’t bring himself to reject her and persuades Saki-chan to let her be his second girlfriend. The trio’s lives are complicated by the sudden entrance of a third girl, as they try to keep their three-way love affair a secret. The show is available on VRV. 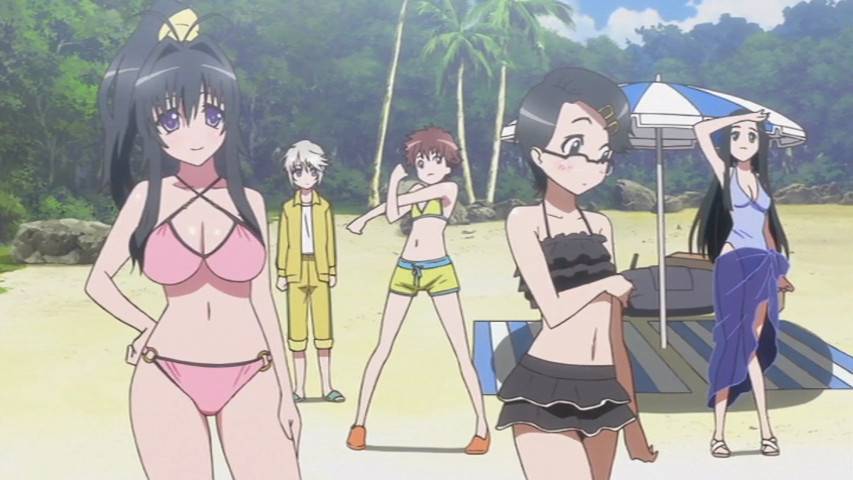 Kouta finally gets to move to a big metropolis to attend high school after spending much of his youth in a village. He makes baby steps to acclimate to the hubbub and the hurdles that lie ahead of him, understandably concerned. Unfortunately, Chizuru and Nozomu, a fox and wolf spirit who are not hesitant to make sexual moves toward the country kid, catch him off guard. Kanokon is one of the most unforgettable harem shows you will ever witness, because to the sexually tense and humorous drama that follows. Crunchyroll has all of the episodes available. 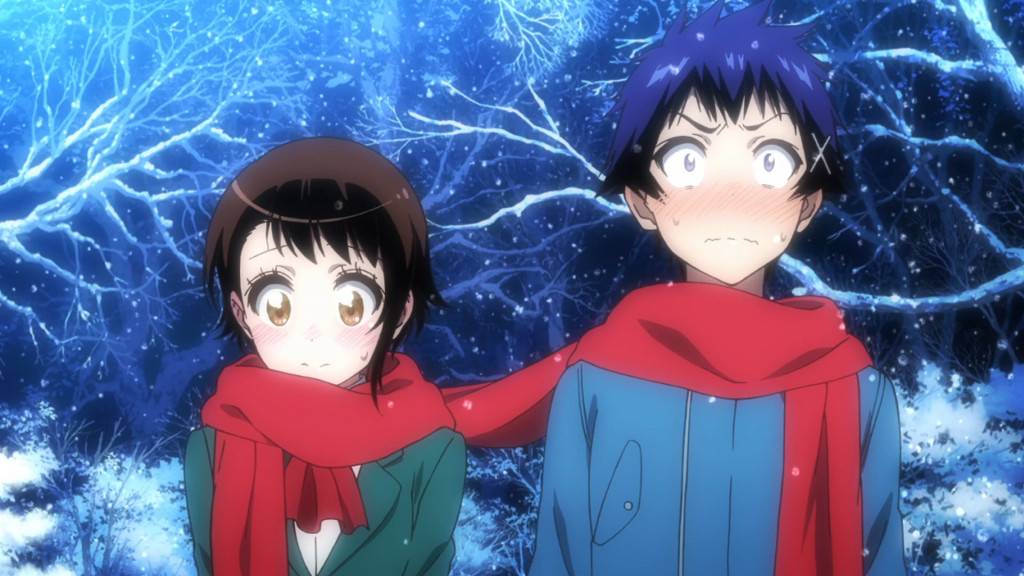 Raku Ichijou’s yakuza family history has always made it difficult for him to establish a sense of normalcy in his life. When the American Bee Hive Gang arrives and puts his family’s turf in jeopardy, it truly becomes a curse. Raku must appear to be in a romantic connection with Chitoge Kirisaki, the daughter of the Bee Hive chief, in order to prevent the region’s violence from spiraling out of control.

Unfortunately, the two youths despise each other, and Ichijou’s issues are exacerbated by an unexpected encounter with former and current girlfriends. ‘Nisekoi,’ based on Naoshi Komi’s manga series, is without a doubt one of the best harem animes ever made, with a chaotic yet humorous premise that makes for a fun watch. All of the episodes are available on Funimation. 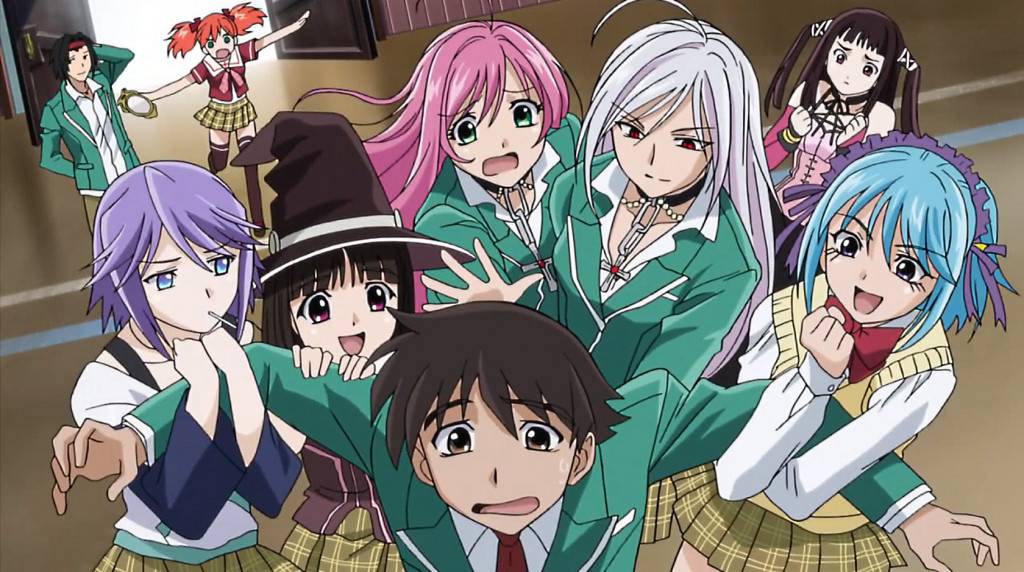 Youkai Academy may appear to be a typical boarding school, but it teaches monsters how to live alongside humans. Although integration may be the ultimate goal, humans are not welcome on the school grounds, and those who are identified will be executed instantly. When Tsukune Aono, a troubled adolescent, is denied admission to any other school, his parents send him to the dangerous realm in the hopes of securing his education.

Aono discovers that he must work hard to focus on his studies and keep his identity hidden while surrounded by attractive young women. However, he finds it difficult to get anything done because of his curvy peers. You can watch the anime here to find out how the narrative unfolds. 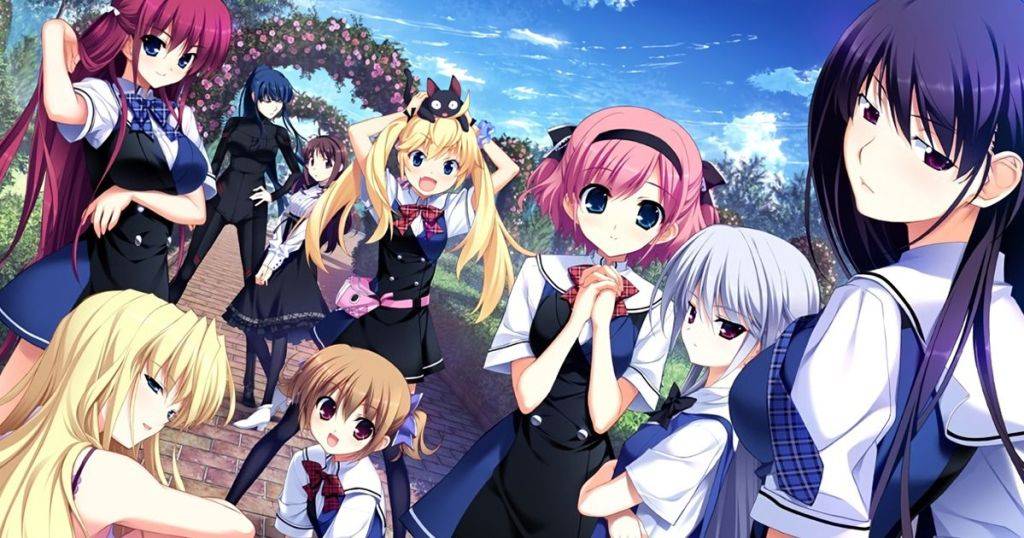 Yuuji Kazami enrolls in Mihama Academy in the hopes of finally living a normal life, but his dreams are dashed when he discovers that his new high school is anything but conventional. Except for the principal, there are only five other female students on the campus, all of whom have experienced trauma and may have dangerous inclinations that endanger their own safety.

Yuuji must save them, but will he be able to complete the difficult mission given his own internal conflicts? ‘The Fruit of Grisaia,’ based on adult graphic Japanese light novels by Front Wing, is a shamefully underappreciated blend of harem and psychological genres that has never received the attention it deserves. The series may be found on VRV. 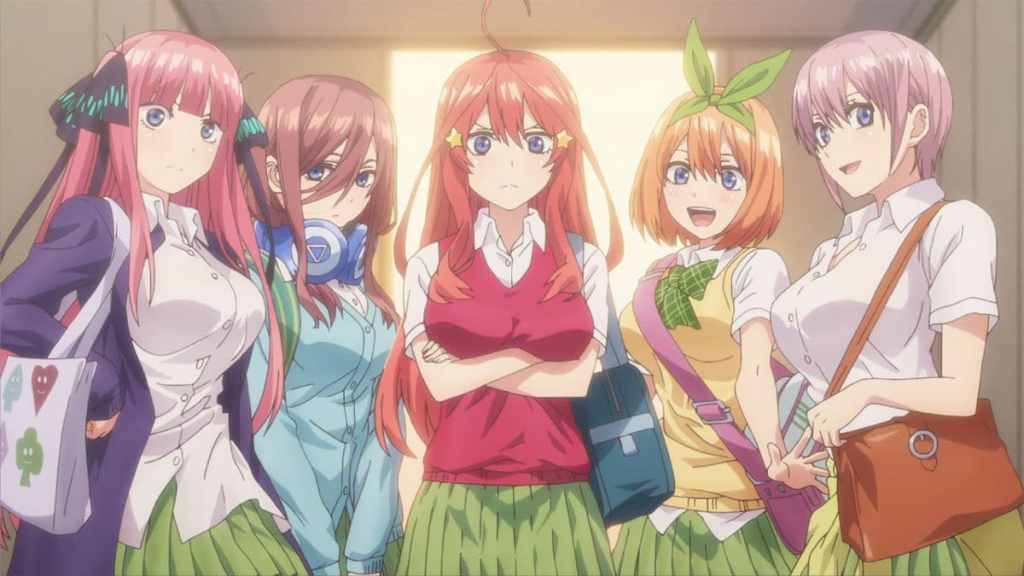 Despite the fact that harem anime has a sizable fan base, few of them are well-received or have an interesting idea. ‘The Quintessential Quintuplets’ has all of those characteristics, so it’s no surprise that it made our list. The show follows Fuutarou Uesugi, a bright high school student who is assigned to teach five quirky sisters.

With his family in financial trouble, the young tutor is keen to assist his student in graduating, but the sisters despise not only studying but also Uesugi. As the drama progresses, the hysterical plot takes a love turn, while the tutor-student conflict intensifies. The animation can be viewed here.

The Testament of Sister New Devil (2015) 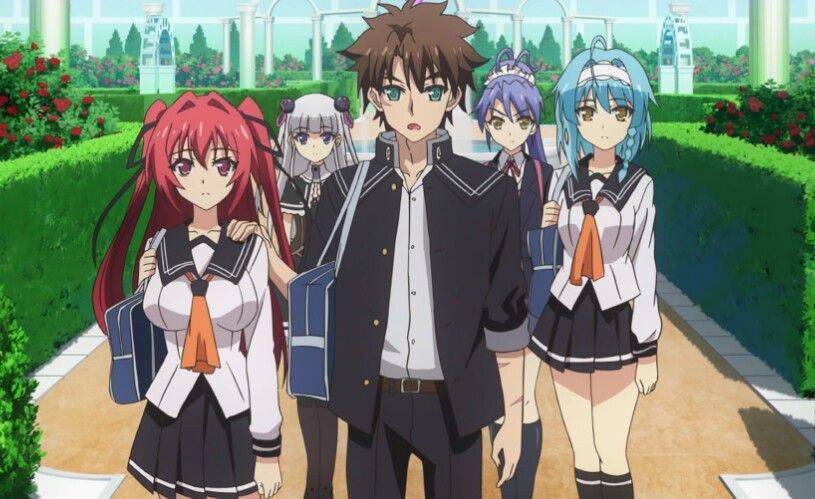 Basara Toujou was a former member of a hero clan who now lives a peaceful life free of strife and violence. When he stumbles into a female in his bathroom, though, his life takes an unexpected turn. Basara later discovers that his father has brought two stepsisters, Mio and Maria, home with him. Although the protagonist accepts the pair, he is surprised to learn that the girls are demons, the sworn foes of the clan to which he formerly belonged. 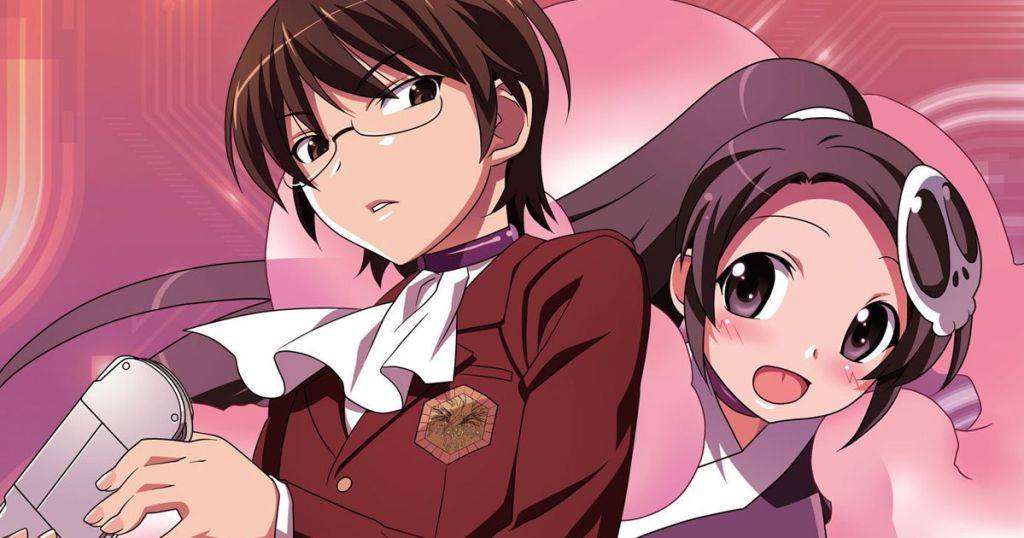 Instead of getting out and experiencing romance in person, Keima Katsuragi has spent the most of his free time playing galge games and gaining girls’ hearts in the 2-dimensional realm. When he is duped into making a bargain to help a demon from hell uncover evil spirits hidden in the hearts of females, Keima is forced to put his gaming skills to the test in the real world.

As he meets a variety of real-life women, he discovers the genuine nature of a love relationship, which challenges all of his previous beliefs. We recommend adding the spooky comedy anime to your watchlist since it is a whirlwind of emotions. All of the episodes can be found here. 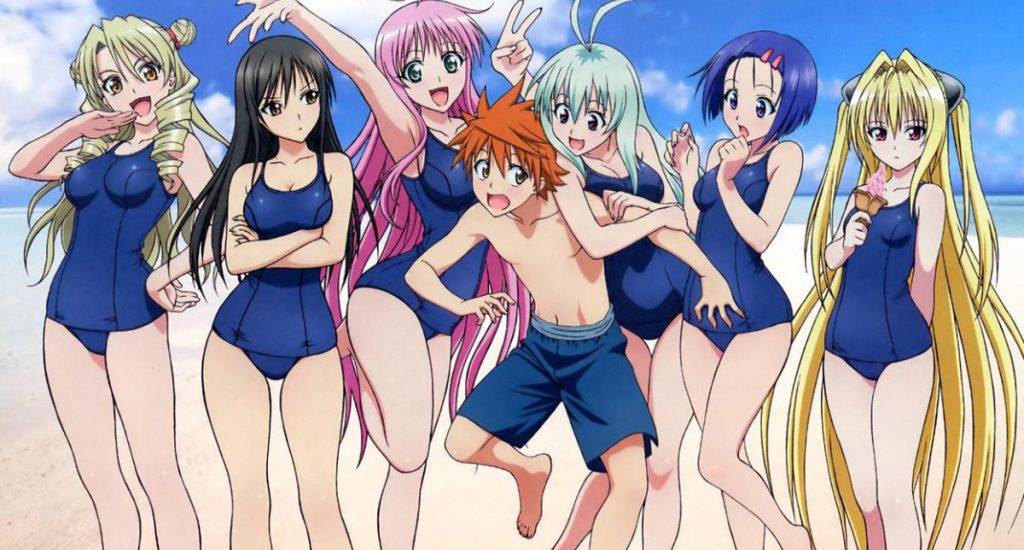 ‘To LOVE Ru’ is a harem romantic comedy animation based on Saki Hasemi’s Japanese manga series of the same name. The series follows Rito Yuuki, a young adult whose life is turned upside down when Lala Satalin Deviluke, the princess of a powerful extraterrestrial nation, falls into his bathtub. She is willing to marry Rito, despite the fact that he is not noble, in order to avoid an unpleasant political marriage.

Rito’s routine has been thrown into disarray, and to make matters worse, a swarm of swooning beauties has thwarted all of his attempts to profess his emotions to his crush Haruna Sairenji. Can he withstand the swarms of gorgeous girls who follow him around everywhere he goes? You may discover out by watching the harem anime on Hulu. 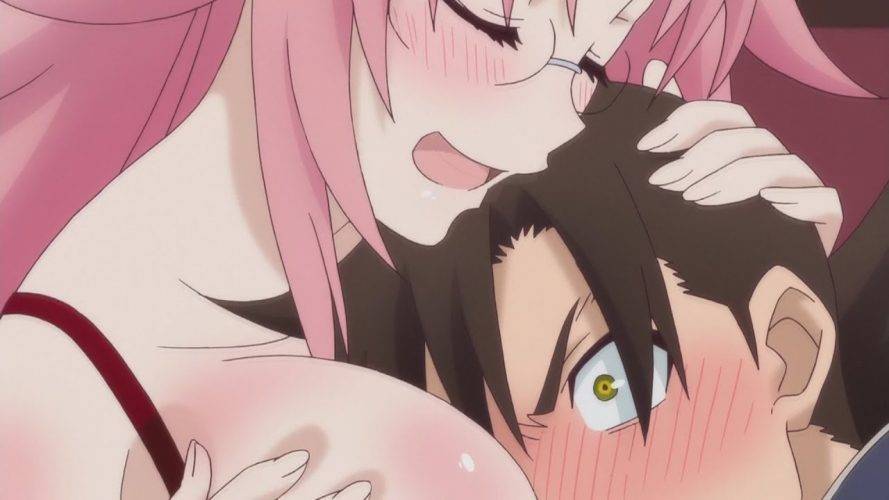 Yuragi-sou was formerly a renowned hot springs inn, but due to stories that a malevolent ghost resides there, it has since devolved into a run-down boarding house. While the gossip may be enough to deter most visitors, it turns out to be the ideal home for Fuyuzora Kogarashi, a destitute and homeless psychic who is eager to banish the ghost who resides there.

When he eventually encounters the fabled spirit, he discovers that she is Yuuna, a kind silver-haired girl who has no recollection of her life before to her terrible death. Ignoring the tumult and gossip surrounding him, Kogarashi resolves to assist her in discovering the secret that binds her to the mortal world. ‘Yuragi-sou no Yuuna-san’ has a terrific storyline and plenty of humorous situations to keep viewers entertained, but it also has a lot to offer harem anime aficionados. The show can be viewed online here.