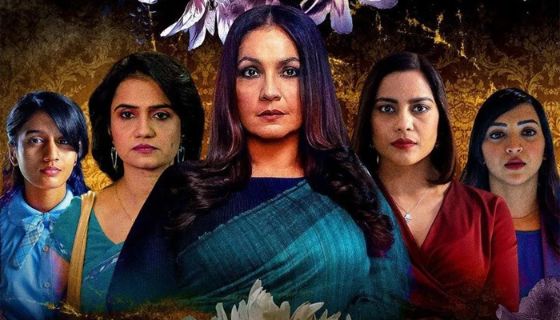 Bombay Begums is a Hindi drama set in India that will premiere on Netflix on March 8, 2021. Alankrita Shrivastava wrote and directed the online show, which stars Pooja Bhatt from Dil Hai Ke Maanta Nahi. Endemol Shine India also functions as the producing company. In addition, it is available in both Hindi and English.

The web series is a feminist drama that follows the lives of five female characters. They’ve decided to stay and struggle in Mumbai, the city of dreams. They go on a journey fraught with never-ending hurdles in order to establish a niche for themselves. Pooja plays Rani, a bossy businesswoman, while Amruta plays Lily, a bar dancer yearning for a respectable life. Shahana (as Fatima) portrays a heroine who aspires to be successful in the corporate world, but her ambitions are dashed when she learns she is expecting a child. Aadhya Anand (as Shai & Rani’s kid) and Plabita Borthakur (as Ayesha) face various challenges. After a road rage incident and a strange scandal, all five of them become connected.

It’s an excellent choice for International Women’s Day viewing. Alankrita Shrivastava, the developer, deserves the majority of the credit. The program not only connects with the audience, but it also portrays the reality of working women in today’s world. It’s the narrative of a group of women from various backgrounds. Shrivastava has previously appeared in films such as Lipstick Under My Burkha. The web series adds to her already impressive resume. Aside from that, the outstanding cast, led by Pooja Bhatt, is very charming. You feel passionately linked to the series from the beginning to the end. Without further ado, watch it and take in every moment and line of language!