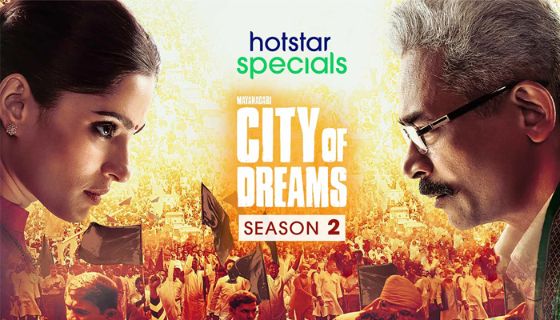 From July 30th, 2021, City of Dreams Season 2 will be available on Disney Hotstar Specials. The drama-thriller, directed by ace filmmaker Nagesh Kukunoor, stars Atul Kulkarni, Priya Bapat, and Eijaz Khan in lead parts. In addition, the OTT series is produced by Applause Entertainment in collaboration with Kukunoor Movies. Furthermore, the online series is available in both Hindi and English.

Poornima (Priya) and Ameya, a daughter and father duo, are at the center of the plot (Atul). As they strive for overpower, they collide head-on. Also, in politics, there is no other relationship but that of opponent. Furthermore, the struggle between them becomes uglier as backstabbing, murder, and betrayal are displayed. Watch to see how a daughter defies patriarchy and battles her father for the office of chief minister.

City of Dreams Season 2 All Episodes

Season 2 of City of Dreams is very remarkable. It is flawless in every way, including director, narrative, and performance. As a result, congrats to Nagesh for bringing in such a fantastic series. It’s a powerful political story in which family members are pitted against one another. It also reveals some of the country’s darkest political secrets. Furthermore, Atul, Priya, and Eijaz all share acting credit. Three of them each contribute to the show’s positive vibes in turn. Overall, it’s a more fascinating, edgy, and original show than City of Dream Season 1.

The best part of City of Dreams is Atul Kulkarni. He was bedridden for much the entire first season, tormented by billboards and loose talk. Now he’s back for another bout, resplendent in silver. The higher an Indian actor’s profile rises, the more directors tend to promote him. With Atul, Nagesh Kukunoor, who has directed everyone from Shreyas Talpade to Akshay Kumar, maintains his composure. He utilizes him carefully, as if he’s a ticking time bomb.

In reality, a portion of that device had detonated at the end of Season 1. Ameya Rao Gaikwad (Atul), a politician, had awoken to find the world had changed. He’s reduced to a cripple in the new season, clutching at the dark at a game he once ruled.