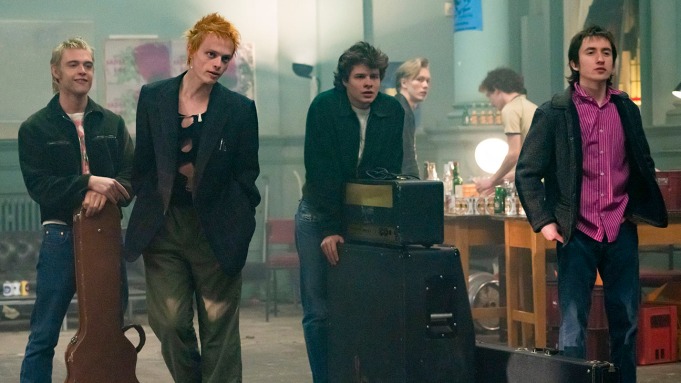 Perhaps it’s understandable that biopics of notably influential artists so few match their subjects’ level of artistic brilliance. After all, it would be difficult for any piece of art—even one whose primary purpose is to explain how and why Never Mind the Bollocks came to be—to replicate the Never Mind the Bollocks by the Sex Pistols’ lightning-in-a-bottle impact.

Danny Boyle, the director of FX’s six-episode miniseries Pistol, makes a sincere effort to capture some of the band’s energy in its frantic, unrestrained approach. However, these initiatives serve a story that, despite being frequently captivating, feels too well-trodden to be revolutionary. Pistol seems like a cover album of songs we already know by heart, far from the shock to the system that the band meant their music to be.

Through a mixture of footage from the era, including sitcoms, David Bowie performing at the Odeon, violent upheavals, and Queen Elizabeth II, the first few minutes of the series establish 1970s Britain as both the finest and the worst of times. A ragtag group of musicians exist somewhere within that chaotic situation. In the course of around five years, they will develop into the Sex Pistols, conquer the world, and ultimately implode in a spectacularly visible way. Whether or not a viewer is familiar with this particular band, the general shape of their arc will feel familiar because it has been repeated in numerous other rock biopics before it.

Pistol does a better job than some at giving that formula some new life, especially with a pair of outstanding performances. Although frontman Johnny Rotten doesn’t appear in episode one or two in its entirety, it feels like a star-making moment when the impassioned 22-year-old Anson Boon who plays him performs a wild cover of Alice Cooper’s “Eighteen” during his audition. The show’s protagonist may be guitarist and founder Steve Jones (Toby Wallace, who portrays him with wounded, childish swagger), but Boon’s John is its heart. This is in part because Pistol creator Craig Pearce primarily pulls from Jones’ biography, Lonely Boy.

Malcolm McLaren is its analytical brain if John is its soul. He is a relentlessly charming Svengali, as portrayed by Thomas Brodie-Sangster, who elevates manipulation to a fine art. Pistol’s emotional core is composed of the trio’s push-pull, which also serves as our window into the entire British punk scene.

A rotating cast of musicians, artists, models, and creatives make up the community in addition to the other band members, who include drummer Paul Cook (Jacob Slater), bassist Glen Matlock (Christian Lees), and Glen’s eventual replacement as bassist, the notoriously self-destructive Sid Vicious (Louis Partridge). Even the least narratively relevant of these individuals will end up being well-known enough to have their own Wikipedia pages. As Jordan, one of the style symbols of the punk movement, Maisie Williams (Game of Thrones), one of Pistol’s more well-known young actors, has little to do other than sit around looking incomparably cool.

Boyle’s all-inclusive strategy reflects the culture’s wild party environment. Using a 4:3 aspect ratio reminiscent of vintage TV screens, Pistol alternates between a soft-focus and a gritty appearance, inserts clips from news stories from the time period, positions his camera at strange angles, and edits at a rapid clip. Not only the Pistols, but also (certainly pricey) artists like David Bowie, Pink Floyd, and The Who provide the music for the entire production. Even while it sometimes seems self-conscious, the showiness gives the series a fun sense of comedy. It also serves to detract from the script’s propensity to rely on clichés that are so overused that occasionally the characters themselves call them out, as when Johnny calls Sid’s tragically true prediction that he won’t live past 21 a “dumb cliché.”

The actual characters, especially the supporting ones, many of whom are female, can get lost in the chaos. Founder Chrissie Hynde of the Future Pretenders (Sydney Chandler) and fashion pioneer Vivienne Westwood (Talulah Riley) each get their own plot lines about advancing in their respective industries. But because there isn’t enough room to do their arcs justice, they feel rushed, and the characters end up being mostly defined by their interactions with the guys in their immediate environment.

They are at least better off than Nancy Spungen (Emma Appleton), who is always shown as a source of annoyance, contempt, and eventually pity and never as a person worth getting to know on her own terms. Or Pauline (Bianca Stephens), who is subjected to all manner of humiliation and abuse in episode three in order to serve as the inspiration for the song “Bodies” before completely disappearing from the series.

Pistol is not good at reflection. Although the Sex Pistols’ significance is frequently discussed by the show’s protagonists, it is rarely thought about how the band or their story ultimately turned out to be understood. The contradiction between the “raw authenticity” of these working-class guys and their planned branding as such, which takes precedence even over the music itself, is one of its most intriguing themes. Sid, who admits that he is a terrible musician, shrugs and tells John, “No one cares what you sound like. What you look like is important. His enduring notoriety in the actual world would seem to support that.

But how authentic can someone be if they are acting real? A controversy that is being deliberately stoked has what value? Which is more important, these men’s identities or what they might represent? These are questions that should seem particularly relevant in these turbulent, social media-dependent times, but the show doesn’t seem particularly able to address them or really interested in making a connection between them and the present. It’ll be content to present well-known facts with entertaining swagger, and it succeeds enough in those endeavours to make for a light-hearted viewing experience. Pistol, however, is too preoccupied with reminiscing about the nascent defiance of youth to realise that in doing doing, it has evolved into the same thing its contemporaries scorned: a safe, mainstream crowd-pleaser.

Who Is Rand Gauthier? Pam & Tommy Character| How Real Is The Series?