The first season of Gangs of London debuted in 2020 at the beginning of lockdown; it sprang out of nowhere and completely astounded audiences. This sleek examination of extreme violence, which was set in the capital city and was developed by Gareth Evans and Matt Flannery, looked at the competition between multinational gangs for control of various elements of the criminal underworld. The first season’s events begin with the murder of gang leader and patriarch Finn Wallace (Colm Meaney), who is succeeded by his brash son Sean (Joe Cole), who is determined to exact revenge. Undercover police officer Elliot Carter (Sope Dirisu) is attempting to infiltrate the Wallace/Dumani empire by taking on the role of Sean’s right-hand man.

Power struggles and betrayals happen frequently; if you need a summary of what happened, look no further.

This fall brought the start of season two, which completely changed everything. And now it has been revealed that a third season will indeed be coming! And even though season two’s story arc is finished, the final episode gives us a lot to look forward to in the upcoming season.

What this means for season three is where season two leaves us.

One year has passed since the end of season one when season two begins. Sean is supposedly dead. The investors are in charge from behind the scenes, and a Pakistani heroin baron is causing chaos in the city.

They bring in Koba (Waleed Zuaiter) and his group of Georgian thugs because they want order. No one else but Koba and Asif is allowed to sell firearms or heroin. When the newly formed gang the Algerians purchases their weapons from a source other than Koba in episode one, they learn the hard way that failing to toe the line will have dire consequences.

However, not everyone is content with this. By the end of the season, allies have been formed and broken, and bodies have accumulated. Who is now left?

Luan (Orli Shuka), the leader of the Albanian mafia, has had a difficult season two, but he has at least survived. But he is a different man now. Eri Shuka, Orli’s real-life wife, is kidnapped by Koba the Georgian bully as retaliation for Luan defying him. Koba then buryes Eri Shuka alive. After a gruelling ordeal in episode 4, a deranged Luan does everything in his power to save her, and he is ultimately successful. By the conclusion of season two, Luan has learned the importance of family. After an altercation over the shipment of heroin that Marian (Michelle Fairley), Luan, and Shannon (Pippa Bennett-Warner) stole from Koba and then later stole again, Ed Dumani (Lucian Msamati) and his daughter Shannon (Pippa Bennett-Warner) killed all of his regular goons. Even though Luan is still a dominant figure in the capital, he is aware of his weak points.

After jumping to his death in the first episode, Alex Dumani (Paapa Essiedu) has passed away. Due to the police’s failure to establish sufficient evidence to support Vicky’s (Jing Lusi) murder charges, Shannon was released from prison. Ed shot Marian and left her for dead at the end of season one. And in an effort to maintain order in the city, Ed, ever the negotiator, has now sided with Asif. Although Ed initially betrays Luan, he is better than that and his conscience can’t stand it. Even though it seems like he will die, he fights back with Luan in the closing moments. Ed ultimately chooses to side with his daughter and Elliot, who have teamed up to steal the shipment of heroin from Marian and Sean, after realising what Luan nearly lost, realising how strong and dangerous Koba is, and being saved by Elliot (at the expense of his own father). Although Ed and Shannon exterminated the Albanians, he and Luan are remarkably still friendly and might work together once more.

Between the beginning of season one and the conclusion of season two, Marian’s arc resembles a descent into hell. Marian started out as a homemaker before becoming Finn’s wife and the mother of Jacqueline (Valene Kane), Billy (Brian Vernel), and Sean. However, her betrayal by Ed and Sean’s anarchic takeover has changed her after learning of her husband’s affair and intention to leave her. She initially joined forces with Finn’s mistress Floriana (Arta Dobroshi), giving Luan the weapons to distribute, but now she’s assuming leadership. But she goes too far in pushing Sean. She advises Sean against helping Billy when Elliot sends Billy’s arm in the mail. She says, “Forget Billy, Billy’s gone. Sean accuses his mother of being to fault for Billy’s misfortune, nearly strangles her, and declares he will never see her again.

But by the end, Marian has a good seat at the table, and Sean is in jail.

Since the end of season one, Elliot has developed into a hired killer for the Investors, travelling the world and carrying out hit after hit. Elliot’s desire to save his father is greater than everything else, but the investors are holding him in a hidden location as security to keep Elliot under their control. But Elliot gets an opportunity to get his dad out of the country when it is discovered that Sean is actually NOT DEAD.

However, a last-minute choice to assist Shannon and save Ed drastically alters Elliot’s situation. Sean has sent a goon to kill his f ather as his father waits for him at the airport. Elliot is driven over the edge when he realises that Sean was the one who deceived him. Many people die during an attempt to kill Sean in Paris; Elliot is now a convicted felon and has sworn to steal all Sean ever owned before the end of the series.

The young Algerian gang survivors have endured a great deal. One of the rare characters, Saba (Jahz Armando), who had no interest in organised crime, was drawn into the conflict by Sean, whom she subsequently betrays on Elliot’s orders. She is located by Koba, who then commands her cousin Hakim (Aymen Hamdouchi) to murder her. Due to intense pressure, Saba kills her uncle Basem (Salem Kali), who has previously been betrayed by Hakim. There is no turning back now that she has stolen a life. She and Faz (Fady Elsayed), who has also witnessed horrific devastation and was almost killed, are still alive, but they are likely hiding because they are minor actors.

We find out that Asif hasn’t actually killed Lale in the final episode’s twist. After Asif killed Lale’s husband and Lale killed Asif’s son, the two have been at odds for a long time. Sean’s Kurdish group saved Lale, but he subsequently tragically betrays her by handing her over to Asif rather than saving her. However, Asif claims he seeks a companion, a fellow exile, who can assist him in recovering what has been taken. Asif is not in the hotel room where the opposing gangs congregate; instead, he is in a different, much nicer room, negotiating with Lale. It’s important to note that, as far as we are aware, none of the others are aware that Lale is alive. Lale will be determined to exact retribution for Sean’s betrayal as well. Lale may be a potent tool for the time being, but Asif can never forgive her for killing his son. How long they collaborate for until one tries to kill the other won’t be known until season three.

Billy only has one arm, and Sean is in jail after Elliot left him hanging while perched on a tyre of a car. His misdeeds are numerous, but what he will have acknowledged to is another issue. It is unclear what he is in for. He undoubtedly poisoned Koba because his body is at the spot. Sean is therefore currently out of the running, but given how important he is to the program, we can’t rule out the possibility that he will play a significant role in season 3. Will he find a way to escape? Will he start a new group while incarcerated? Or will he discover that he must suddenly develop humility after being imprisoned and losing his position as the great man? Doubt it…

That will undoubtedly be a significant question in season 3. Who is collaborating with whom and who will prevail?

In the final episode, Elliot and Marian take the final two seats at the hotel room table, sitting across from one another. These two are unquestionably on opposing sides, and their conflict may serve as the season’s main source of tension. Ed and Shannon are currently most inclined to support Elliot because he is sitting between them, and because he helped steal the heroin shipment and saved Ed’s life. Saba will probably support Elliot over a Wallace family member if the young Algerians remain in the game.

Even though Luan is loyal to Marian, he also has a long-standing relationship with Ed. We suspect Luan might side with Marian because Ed betrayed him and killed his men, whereas Marian supported Luan and neither of them betrayed the other. Despite the fact that Luan has no relationship with Elliot, it was Sean’s actions that allowed Luan to escape and rescue his wife as well. He might continue to associate with the gangster he knows.

In that hotel room, there are a few additional people who are not the main characters right now but could very well blossom in season three. It’s noteworthy that neither East Asia nor Japan, which could add an interesting dynamic, currently have any main character gangs. The Chinese and the Vietnamese were only introduced in passing in an early episode.

Will Corin Hardy return for season 3?

Although there hasn’t been any official announcement regarding Corin Hardy’s return for the upcoming season, if we had to guess, we’d probably say no. The massive episode five farm house siege and other action director Gareth Evans signature scenes were featured in the first season, which was directed by him. Hardy’s signature is all over Season 2, which ups the gore and horror while incorporating his own unique style, including the terrifying home invasion in Episode 1. Although we’d love to see Hardy return, it wouldn’t surprise us if a different director took the helm and added their own flair.

Gangs of London seasons 1 and 2 are available on AMC+ in the US and Sky Atlantic in the UK.

Beginning on December 19, Dazzler Media will release Gangs of London: Season Two & The Complete Boxset on Blu-ray, DVD, and Download-to-Own. 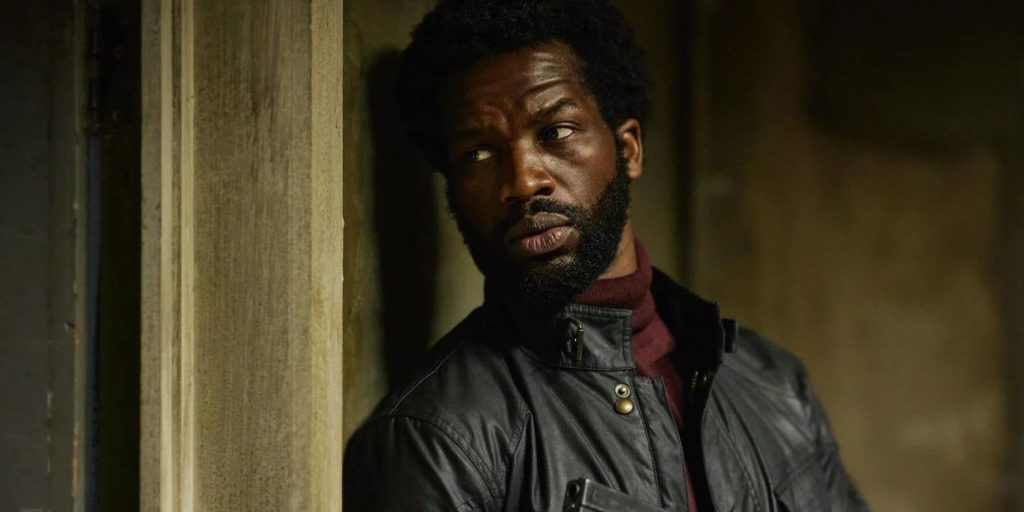 AMC+ has published a new teaser video for Season 2 of Gangs of London, the ultraviolent series that follows London’s crime empire underground. The series is partially based on the same-named computer game from 2006, and it depicts how London’s various criminal gangs combat each other. Elliot Finch (p Drsù),…