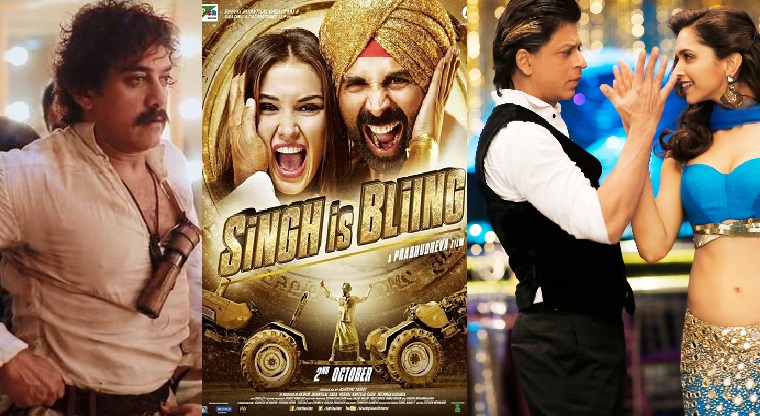 It takes two to win- so goes the saying. In the case of films, the two in question could be star-power and a good story. But, seems like the combination could also be star-power and a dumb story, or even no story at all. At least, that’s what these films show- the ones that weren’t high on entertainment quotient but still managed to rake in the moolah. 8 not-exactly-smart Bollywood films that earned 100 Crores in the box-office.

The fact that Krrish 3 was nowhere near as good as the superhero’s first outing is bad enough. What makes matters worse is that the first instalment wasn’t the best superhero movie around either. With a convoluted plotline and a movie treatment that looked like the director’s only intention with the film was to show how many Hollywood films he has seen in recent times, this is nobody’s idea of good fun. But India being the place where strange happenings are to be taken in its stride, the movie became a huge success.

Son of Sardaar makes a lot of attempts at making you laugh. But the only times they actually manage to tickle your funny bones is with the weird dance moves which were meant to amuse and not as a joke. The story is virtually non-existent, and if there actually is one, you don’t wanna know about it. None of which stopped the movie from clocking in INR 105 Crore in the box-office.

If Happy New Year were a ship, it would have sprung quite a few leaks, for it has plot-holes in more numbers than you would care to count. But that didn’t make the movie sink in the box-office. The film’s highlights were arguably the songs and Deepika Padukone managed to give a decent performance when the rest of the cast seemed like they were pushing time until the movie is over.

Instead of providing you with masti, the entire idea behind the movie was to embarrass the hell out of you-especially if you’re watching it with others. The messages to come up with those jokes.

The most recent in the 100 Crore pantheon, Akshay Kumar’s Singh Is Bling is passable at best. The film, which was predicted to earn at least Rs. 150 crore in its lifetime has already clocked in 100 Crores from around the world. The movie is a comedy but not comic enough for a century of crores.

It’s not uncommon for movies to demand you leave your logic out of the door prior to entering the theatre. But Race 2 ups the ante by demanding that you leave both your logic and sanity behind. For it’s quite hard to understand how the numerous twists and turns in the movies-most of which don’t make any sense at all, not to mention the action sequences which look like they were conceived in a diarrhoea- ridden state, could be palatable to a sane person.

This is definitely one of the better movies in this list, but that’s not saying much. A remake of the comedy, Golmaal, Bol Bachchan does have a few laugh-worthy moments but that’s about it in the way of good news. There are attempts at blowing your mind with crazy car stunts which all but make you yawn.

Though it’s said that story matters and idea is king, judging from movies such as the ones in this list earning enviable success, it seems that marketing and star-power matter more than the idea or the story, at least some of the times. If that’s the case, then it’s a sad day for entertainment indeed.

King Mirza Sikander Baig is assassinated by John Clive in 1795, when the Indian subcontinent was known as Hindustan or Hindostan. Lord Clive of the East India Company annexes his country and massacres the population. His daughter, Zafira Baig, and the general, Khudabaksh, are the only ones who have survived. Khudabaksh defeats the retreating enemy forces and raises Zafira as his daughter, teaching her the techniques of fighting.

Note : We could have easily included movies like Dilwale, Bharat, Dhoom 3, Prem Ratan Dhan Payo and many more, but these movies were saved by at least one aspect of film-making. Like Cinematography or music.