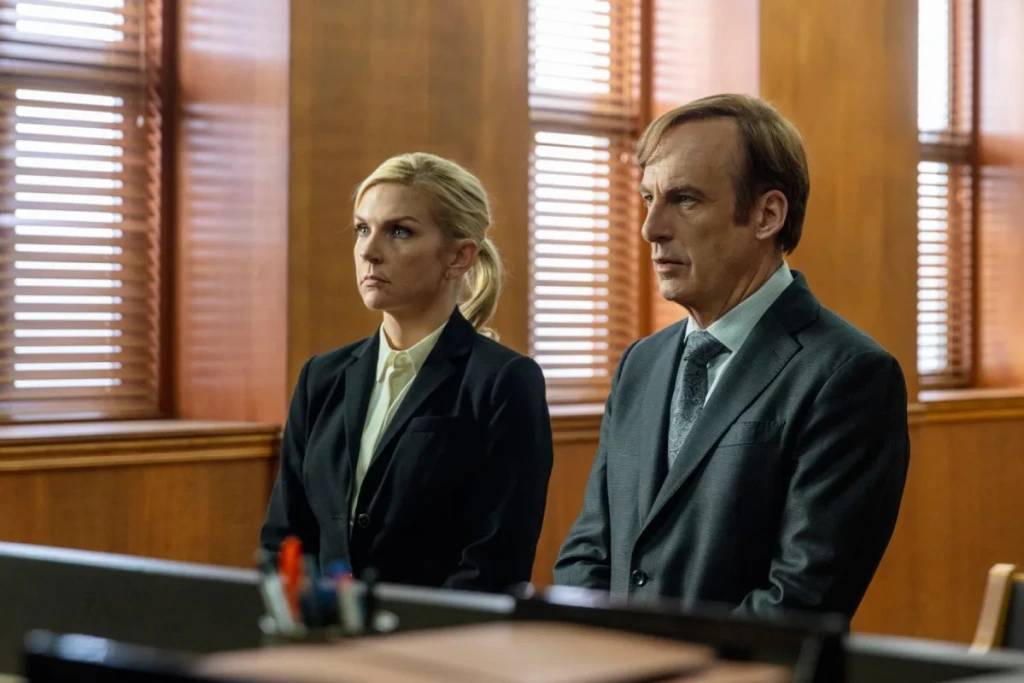 ‘Better Call Saul’s’ sixth and final season begins with a bang. All of the assets in Saul Goodman’s (Bob Odenkirk) opulent home are carefully boxed, and a life-size cut-out of him is discarded. This is the start of the final chapter. Saul and Kim (Rhea Seehorn) continue their plot to sabotage Howard in the Sandpiper case in the first two episodes of season 6, titled ‘Wine and Roses’ and ‘Carrot and Stick.’

Lalo (Tony Dalton) manages to persuade people that he is actually dead. Nacho (Michael Mando) is on the run from the government of a whole country. Gus (Giancarlo Esposito) begins to have doubts about the killers he hired to kill Lalo. Here’s everything you need to know about ‘Better Call Saul’ episode 2’s conclusion. WARNING: SPOILERS AHEAD.

The season 6 premiere episode opens with a flash-forward scenario in which all of Saul’s assets are bundled and taken from his home. Nacho had already attempted to cross the US border while avoiding both the cartel and the Federales. After surviving the attack by Gus Fring’s hired murderers, Lalo goes to his doppelganger’s house, kills him, and burns his body in an unrecognizable manner so that everyone believes he is dead. He does, however, make an exception by informing his uncle Hector. This looks to be a blunder, as Fring discovers he is still alive while visiting Hector.
Meanwhile, Kim appears to be doing well as a pro bono attorney. Despite the fact that he has been convinced that Lalo is dead, Saul remains unsettled. He and Kim decide to look for him a new office place. He and Kim start putting their plan for Howard into action. Saul pretends to be interested in joining Howard’s golf club and places a little plastic bag with a suspicious-looking substance in the other man’s locker. Clifford Main is with Howard when he opens the locker and sees the luggage.

In episode 2, Kim devises a scheme, which Saul grudgingly agrees to carry out. He approaches Craig and Betsy Kettleman and persuades them that Howard was doing cocaine while defending them, and that if they engage him as their attorney, he will clear Craig’s name. Betsy fires him very immediately after employing him. She and Craig then go to see Main to get him to take the case, but neither he nor any of the other lawyers they speak with are willing to defend them. They are informed they don’t have a case everywhere they go.

Betsy eventually realizes Saul is plotting something against Howard and attempts to blackmail him. This is when Kim intervenes, threatening to inform the IRS about their latest scheme. A feud between Fring and Mike begins to simmer as a result of the circumstances surrounding Nacho. Nacho is discovered by Leonel and Marco Salamanca in Mexico. The cartel needs Nacho alive since they don’t know who ordered the hit. Nacho crashes his pick-up truck into another vehicle during the ensuing gunfight.

As they leave the Kettlemans’ shop, someone in their own car begins to follow Saul and Kim’s vehicle. It’s reasonable to believe this isn’t Howard. He’s most likely unaware of Saul and Kim’s plans. We’re supposed to believe it’s Lalo, according to the show. When he speaks with Hector in the season 6 opener, the latter begs him to gather proof against Fring.

Although he is unclear how to do so at first, Lalo eventually informs his uncle that he knows exactly where he can locate proof. While Saul has evidence that Fring was engaged in transporting Lalo returned to Mexico, Lalo is completely unaware of this. So whoever is trailing Saul and Kim isn’t likely to be him.

One more suspect remains: Gus Fring himself. Fring has discovered that Lalo is still alive and is aware that the other man would pursue him at some point. He’s already taken steps to ensure that the attempted assassination would not be linked to him. Nacho would have died a long time ago if it hadn’t been for Mike. As a result, it’s extremely likely that Fring has dispatched someone to track down Saul and Kim.

Nacho isn’t likely to be dead. Mike receives a call during his showdown with Fring after the shootout. He informs Fring that he has received a call from Nacho and that he wishes to speak with him. If Mike isn’t lying — and he isn’t the kind to lie on the spur of the moment — then the person on the other end of the line is most likely Nacho, who is currently in cartel custody.

All hell is about to break loose, as a result of this. If Leonel and Marco believe Fring murdered their relative, they will undoubtedly pursue him. Eladio, the cartel’s leader, admires Fring because he is so successful at what he does. But that doesn’t mean he’ll accept betrayal and internal assassinations.