Emma D’Arcy’s opening sequence as Rhaenyra is shown in a brand-new House of the Dragon clip that HBO recently released for the episode airing next week. After Milly Alcock played the part for the first five episodes of season one, D’Arcy will play Rhaenyra for the remainder of the season. Before this changeover, HBO offered a preview of D’Arcy’s debut, which features a scene from a nightmare childbirth.

The opening scene of the video shows Rhaenyra strolling about holding a newborn baby boy while clearly in pain. She has recently given birth, and it is obvious that she is carrying the child since an unnamed “she” wants to see the infant. It is strongly indicated that “she” refers to Queen Alicent Hightower (Olivia Cooke), who is the second wife of King Viserys I Targaryen and the daughter of Sir Otto Hightower. Laenor, Rhaenyra’s husband (John MacMillan), accompanies her and offers encouragement as they chat casually about childbirth. Was it excruciatingly unpleasant, he queries Rhaenyra? He says, “I am pleased I’m not a woman,” and when that doesn’t get a response from her, he jokes, “I took a lance to the shoulder once,” to which she replies sarcastically, “My heartfelt sympathies,” before Rhaenyra abruptly falls down in pain as he urges Laenor to keep walking. The conflict between Rhaenyra and Alicent, which is a strained connection that ignites a civil war known as the “Dance of the Dragons,” is effectively highlighted and foreshadowed in this scene.

Between episodes 5 and 6, there is a huge 10-year gap, necessitating major recasting decisions on HBO’s part to cater for the young protagonists who are now adults. Along with D’Arcy, John MacMillan takes over for Theo Nate as Laenor Velaryon, Olivia Cooke takes over for Emily Carey as Alicent, and Tom Glynn-Carney will play adult Aegon Targaryen. This implies that a number of fresh faces will emerge, primarily the offspring of Rhaenyra and Alicent, who will undoubtedly make frequent appearances for the remainder of the series. 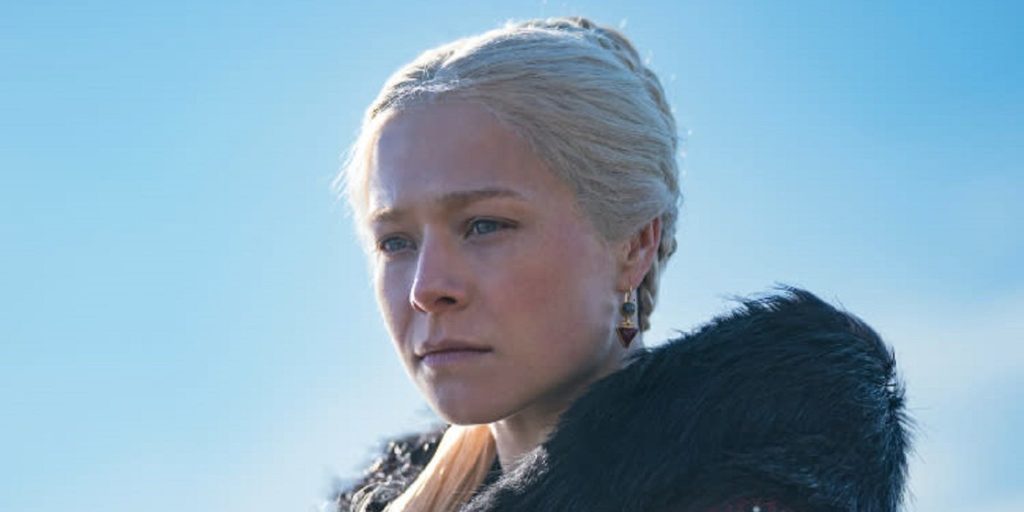 English actor Emma D’Arcy is swiftly establishing herself as a rising talent. In addition to House of the Dragon, they have also appeared in a number of other television programmes, such as Truth Seekers, Hanna on Amazon Prime, and Wanderlust on Netflix. For the rest of the series, they’ll probably continue to play Rhaenyra.

The popular HBO series Game of Thrones, which ran for a total of eight seasons, has a prequel called House of the Dragon. The story of Princess Rhaenyra, an ancestor of Game of Thrones Daenerys Targaryen, is told in House of the Dragon, which is set 200 years before the events of that show (Emilia Clarke). Viserys I Targaryen, Rhaenyra’s father, declares her the legitimate heir to the Iron Throne (Paddy Considine). But when Alicent, Rhaenyra’s childhood closest friend, gives birth to a male heir, the kingdom splits over who should hold the throne, sparking one of Westeros’ worst civil wars in the process.

Every Sunday on HBO and HBO Max, brand-new episodes of House of the Dragon are broadcast.