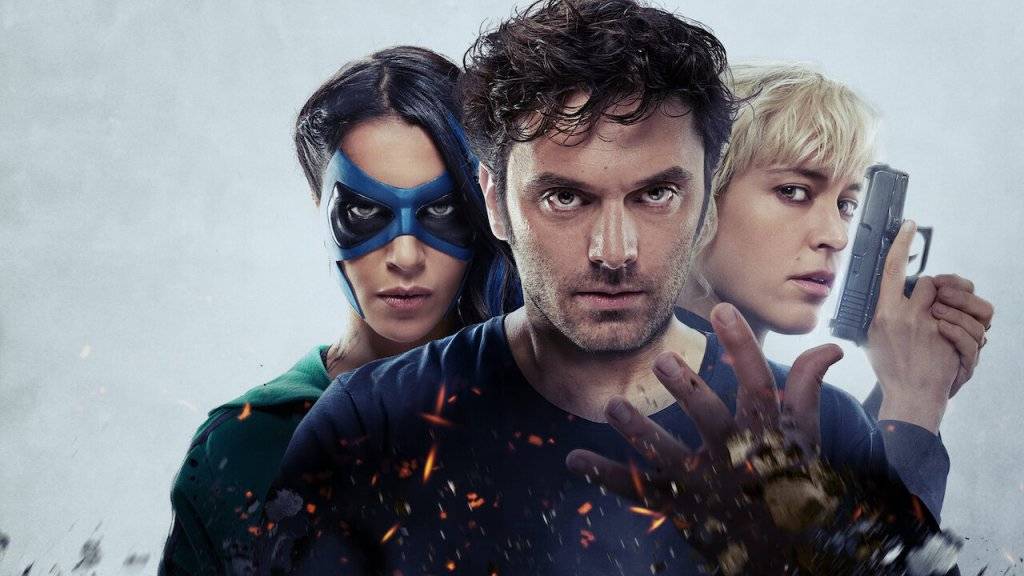 How I Became a Superhero Ending, Explained | What Happens In The End?

‘How I Became a Super Hero’ is a French superhero film that avoids the normal glitz and glam of the genre and instead focuses on the truth (or realism). The film explores the terrifying prospect of superpowers being sold illegally like narcotics, and it exposes us to a world where retired superheroes seek therapy for their traumatic experiences with superhuman abilities. Some people choose to keep their abilities hidden rather than use them. What more may this bizarre alternative universe be concealing? What happens to the evil lunatic who is stealing the abilities of unsuspecting heroes? Let’s take a deeper look at ‘How I Became a Super Hero’s’ finale. WARNING: SPOILERS AHEAD.

How I Became a Super Hero Plot Synopsis

The film begins in a dark alley in Paris, where Eclipso, a small-time celebrity magician, is kidnapped forcefully. Later on, we learn that he is a superhero with the ability to temporarily blind people. A rash of arson cases erupts across the city, with a club and a number of other locations being set ablaze. When an adolescent gains the ability to shoot fire from his hands and holds his school hostage, police officer Moreau and his new, straight-laced academy valedictorian partner Cécile assume that the powers are being transferred around.

The enterprise is then revealed, with a little boy selling brilliant neon tubes to schoolchildren who inhale the contents and gain instant strength. Moreau, who was previously the police liaison for superheroes, discovers that the kids’ abilities are derived from a hero known as Brasero, who is soon discovered dead after having had all of his blood collected. The two cops ultimately catch the child selling the glowing tubes, who is part of a larger operation led by Naja that is kidnapping superheroes and harvesting their powers.

Naja’s henchmen, mostly young boys who have been given superpowers, attack the precinct and free Ismael, who has been kidnapped. Using Eclipso’s powers, they manage to blind the majority of the police force during the fight. Despite being unable to stop the attack, Moreau is able to save his partner’s life by preventing her from falling off a precipice. The cop then reveals that he has superpowers that he has kept hidden for a long time. Soon after, we get a peek of the breadth of his abilities when he foils a kidnapping attempt by Naja’s men. Moreau, on the other hand, gets hurt in the process.

How I Became a Super Hero Ending: Is Moreau Alive?

Cécile enlists the support of two of Moreau’s old superhero pals and strikes Naja’s hideout after learning that Naja is harvesting talents from Lily, the daughter of a powerful superhero. The wicked leader, along with his troops, respond by launching blue lasers from their eyeballs, which they have recently gained. Despite being rusty, the superheroes are able to subdue the majority of them.

Naja, on the other hand, kidnaps Lily and tries to flee after consuming many vials of the superpower serum and exploding with deadly energy. Thankfully, Moreau comes just in time and is able to save Lily after a quick battle. Moreau pins Naja’s arm and shoots up into the sky with him as he tries to chase her, exploding with strength. Moreau reappears, injured and weak, after seeing Naja explode in the sky.

The next day, the news is flooded with reports about a new superhero known as “Titan.” Cécile, who has been named the police department’s new superhero liaison, presents her heroic ex-partner with a mask that he will require immediately. Moreau dons the mask and takes off in the final scene of the film. So it appears that Moreau is still alive and well, having survived the hardship of being near Naja when he burst after taking too many superhero energy vials.

In fact, it appears that virtually little can injure the superman who has kept his abilities hidden for so long. Moreau was shot numerous times in the chest by Naja’s men during an attempt to kidnap him earlier. Despite the fact that it renders him unconscious, we can watch the bullets being forced out of his body and the wounds healing. Moreau is soon back to full strength and challenges Naja in fight, showing no signs of weakening from his prior injuries. In a similar fashion, he is seriously hurt following his battle with Naja, but is soon seen to have fully recovered in the film’s last scene.

Who is Titan and What Are His Superpowers?

The injured Moreau gets whisked away by his companion Monte Carlo shortly after the climactic fight with Naja. The police officers who arrive on the scene observe the fight from afar, but most of them are unable to identify the superhero fighting the villain. Despite the fact that Moreau’s police chief, Chairmont, is already on the scene and recognizes his subordinate, he does not reveal his identity. As a result, news tales about a powerful new superhero named Titan began to circulate soon after the tragedy, referring to Moreau.

As is customary with implausible superheroes, Moreau now has a second identity, indicating that he will ultimately take up the mantle and accept his duty as a superhuman savior. Moreau’s abilities have been devastatingly great in the few instances he has exhibited them, shocking even people with superpowers. He can manipulate matter with enormous vigor thanks to the transparent energy that emanates from his palms. We first notice this when he suspends Cécile after she falls off a cliff and prevents her from striking the ground.

Moreau, or Titan, can even exert immense force, as evidenced by the fact that he can partially smash a van with just one hand. To top it off, Moreau quickly demonstrates significant healing abilities, as we see bullets being automatically ejected out of his body, and that’s not all. Titan, according to the superhero moniker placed upon him by the public, can also fly, making him far more powerful than any of the other superheroes featured in the film, who all appear to have only one superpower.

Who is the Pack Royal?

Moreau collaborated with an old squad of superheroes known as the Pack Royal, who fought crime in and around Paris. The heroes we see in the Pack Royal are Monte Carlo, Callista, and Gigaman, however there could be more. It also appears that Gigaman was the gang’s leader, as the group disbanded shortly following his death.

The Pack Royal was one of the few, if not the only, people who were aware of Moreau’s abilities. The Pack Royal basically reunites under Moreau at the film’s climax, with Monte Carlo and Callista fighting crime side by side after many years. The trio coming together to save Gigaman’s daughter Lily is extremely touching, since it also plays into the subplot of Moreau’s remorse over Gigaman’s death.

Does Naja Have Superpowers?

It is revealed that the deranged villain Naja had the ability to hypnotize and control people as a child. His parents, unable to deal with a little boy with such abilities, enlisted the aid of superhero expert Caghieri to help them get rid of them. Despite Caghieri’s success, the youngster went insane and killed his parents as a result of her surgery. As a result, Naja used to have hypnotic superpowers but no longer does.

The top he spins whenever someone tells him something he thinks is a lie could be the last remnants of his boyhood superpower. Though it isn’t explored in the film, it appears that he is channeling mental power through the top, which is why he spins it on Ismael’s head when he claims to be telling the truth. Naja’s ability to read Ismael’s mind is evidenced by the fact that he orders Ismael’s death shortly after. Of again, given that Naja is characterized as psychotic, it’s possible that he simply plays with the top and decides on his own whether or not to kill someone.

Naja’s only visible superpowers are those he gathers from superheroes and absorbs through the glowing tubes. However, he can eat considerably bigger quantities of the serum and have explosive powers that far outweigh those of his underlings, who would perish if they tried to consume too much of the superpower-giving material.

Who is the Girl in the End Credits Scene?

Gigaman’s daughter Lily is the girl in the end credits scene, who has lately been rescued by Moreau. We see her drawing a superhero costume, indicating that she will most likely follow in her father’s footsteps. Though we don’t get to witness Gigaman’s talents in detail, one of the abilities he inherited from his daughter is the capacity to fire destructive blue lasers from one’s eyes. As a result, this is most certainly Gigaman’s daughter’s power. So, what do you think her superhero name should be?